After a night of storms rumbling their way past – lots of lightning and thunder but little in the way of rain – we got up and headed back up the steep, winding road to Thredbo. The yellow road line markings as you reach a certain snow line elevation and the two metre high roadside posts give an indication of where the snow is heaviest in season. The village was very busy – car parks packed, lots of families doing activities such as an orienteering competition being run around us. Athletes in a park obviously doing altitude training on rowing machines and exercise bikes. And lots (LOTS) of mountain bike riders moving around with body armour like they were going into battle. Once we saw the steep tracks they were riding down from the top of the chairlift we understood why they were dressed as such – one bloke was hobbling around with a hip or thigh injury. It’s a group and a culture not unlike surfing and skating with the clothing, gear and (very expensive) equipment to match.

Anyway, our plan for this sunny alpine morning was to chairlift our way from Thredbo to the start of the walk to Mt Kosciuszko. The chairlift rises 560 metres over 2 kilometres taking some of the legwork out of the trek to Australia’s highest peak. We got an all-day ticket so – after we’d strolled our way up Kosciuszko on such a beautiful day – we could do a few trips up and down for fun – watching the mountain bikers and seeing the views.

At the top we realised why we had dashed back to the car to grab some jumpers “just in case”. It had cooled markedly and as we looked out the first sight was a spectacular lightning bolt in amongst the darkest grey cloud Kosciuszko could muster. Our sunny day had taken a bit of a turn. Nevertheless we started out on the fairly easy walking trail – first a track and then a raised metal boardwalk. We decided the “white stuff” in the distance couldn’t be snow in the middle of such a hot summer but couldn’t determine what it was. The clouds seemed to get closer, then the moist mist blew in, then the fog started to envelope everything. We wondered if Thredbo was still sunny with all the happy families way down below. 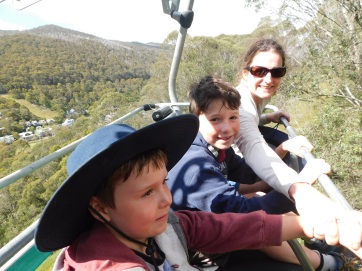 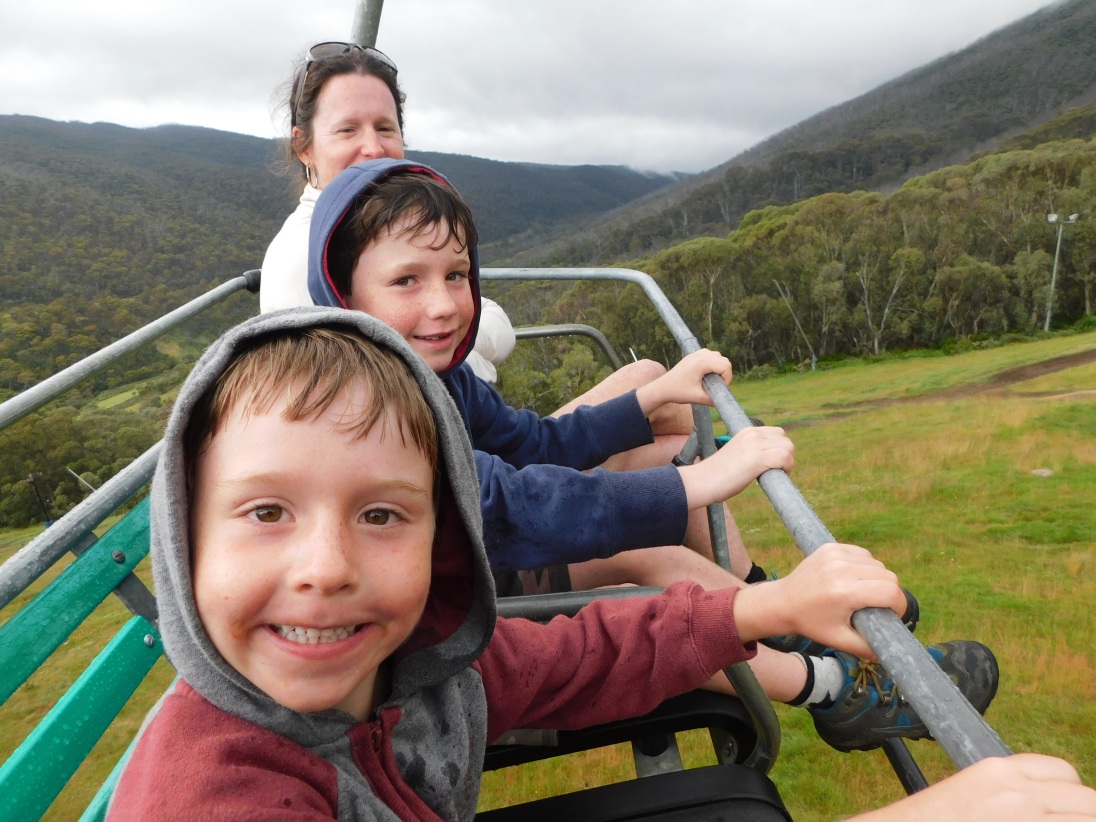 We pushed on knowing others walking close to us were starting to change their plans. The Mt Kosciuszko lookout – initially planned as a brief stopping point for the distant view of our ‘peak’ destination – quickly became the objective of many walkers including us. The wind was whipping, the air was like ice, the rain drops pierced through clothing – 36 hours before we’d been sweltering in 40+ degrees. The punters in their shorts, t-shirts and thongs were the first to turn back. Their ‘stroll’ to the peak postponed.

On reaching the ‘lookout’ there was nothing to look out at. The clouds covered everything – sometimes briefly lifting but then quickly enclosing the whole area again. It was hard to even take the time for a photo with the freezing wind and rain. Another family with us – all the way from Glenreagh and born and bred Coffs Harbourians – decided they would attempt Mt K tomorrow from the Charlotte Pass angle. With the track 50 metres ahead blurring into grey fog we admitted defeat and turned back.

Then of course, that ‘white stuff’ was determined to be the last of the snow. It took the coldness of the middle of the Kosciuszko summer to make us put two and two together. Aim was determined to get the boys to the snow and, as the weather again cleared slightly in our favour, we made a side trek off to one of the last patches. Lach was first there and, knowing nothing about what he was approaching, quickly stepped, slipped and slid down the glacier with the biggest shock of his life! But the excitement of it all was great. We didn’t expect snow and it was fun to have a touch, ice-skate, slip, slide and then of course Aim decided to have a snow ball fight…really Amy…really..?? 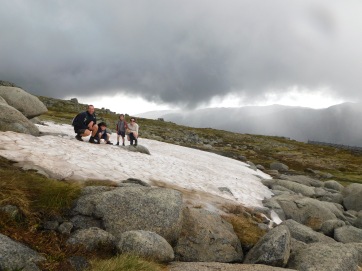 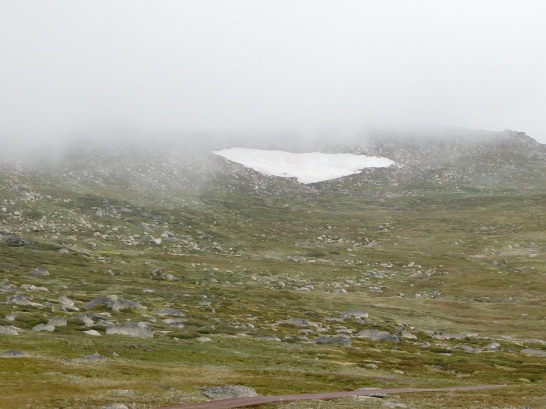 We jumped on the chairlift with no delay and headed back down the mountain. It was raining at the bottom (again) and we sought shelter and watched the walking groups who had paid for a guide for the trip to the summit arrive back – also failing in what seemed like such a simple walk at the start of the sunny day.

The rain eased and we decided that we should make the most out of our “day pass” for the chairlift. It was fun and one more trip up and back would be quick and easy. As we started up the ride, yet again Kosciuszko quickly turned on the ice cold sleet – literally burning our faces with a wind that we could feel to the bone. We couldn’t see this weather coming from down the bottom. At the top we gestured to the chairlift attendant that we’d like to stay on and go back down…….sorry, the lightning is hitting too close……..so they shut down the chairlift leaving us stranded up the top – freezing, drenched and dreaming of the car heater (which we wouldn’t have fathomed in the heat two days ago). The chairlift stopped. The stranded crowd at the top grew in the small shelter area as walkers – mostly with glum “we didn’t make it” looks arrived from the trail. The storm came in as they expected. Hail rained down. The walkers who came in now were battered – room in the crowded shelter was quickly made for these battlers. As quick as it hit, blue sky appeared through the dismal low cloud. Probably 15 minutes which felt like three hours and the chairlift fired up again. Down we went and then walked as quickly to the car as we could to warm up.

Funnily enough, back at Tom Groggin camp, we had a swim in the river (four seasons etc etc) and got a fire going. More people than the night before came in. It was a quiet night except for some nearby campers who needed to fire the chainsaw up at 8pm when the boys were just asleep – but they got their logs sliced up quickly. Can’t blame anyone for wanting a warm fire!