Another morning at Torquay. Josh snuck out of the tent early before everyone was awake to spend some quiet time at the beach. Beautiful glassy waves before the wind got going. Few people around but a group of morning swimmers/body surfers chose the same spot to have a bash (basically where the flags have been for the past two days). The waves have the perfect power and size for body surfing. Very enjoyable.

We’d packed most of the car the night before and just had air mats, sleeping gear and the tent to roll up and throw in. We were soon on the road.

Crossing Spring Creek opposite the caravan park signalled the official start of the Great Ocean Road. We didn’t last long before we deviated off the GOR to Bells Beach to check out the surf…having no idea what might constitute good, bad or average. The place was pretty speccy with it’s views and cliffs and it’s easy to understand why – apart from the amazing swell that rolls in and the breaks that mould the waves – this spot is world renowned. We had some breakfast while we watched around 50 surfers having a crack on two different breaks. 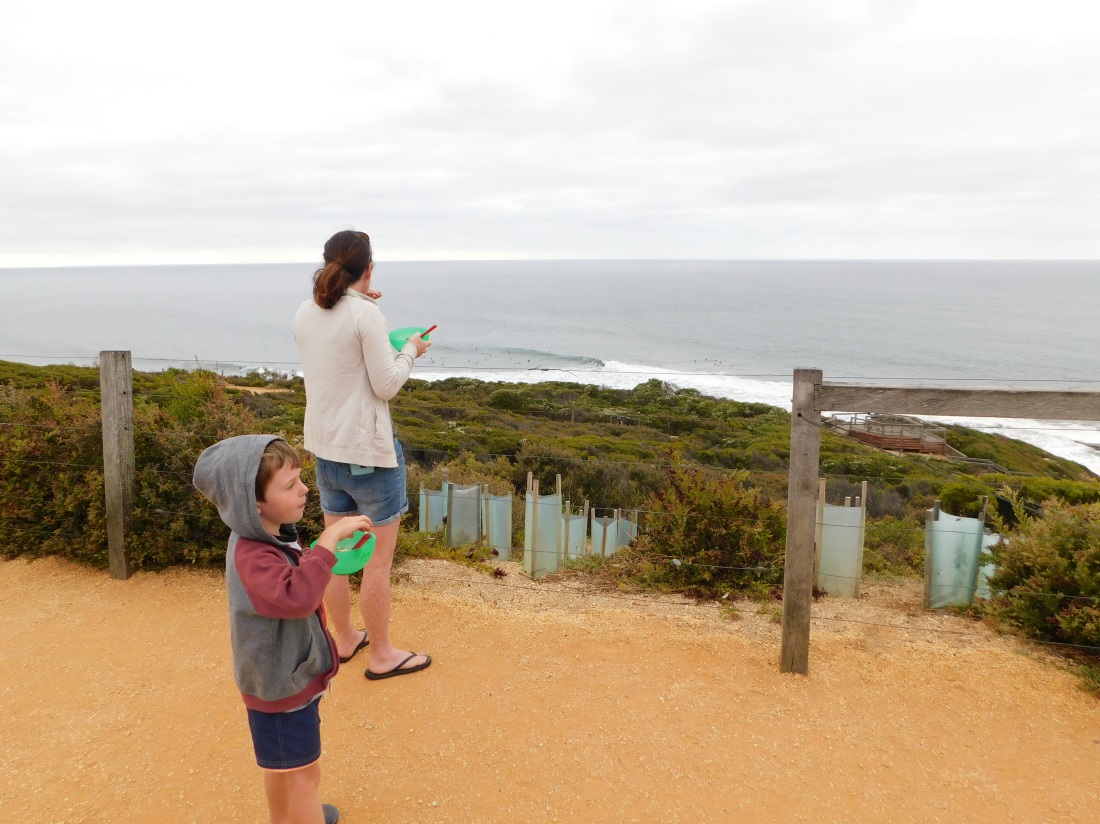 We pushed on back along the Great Ocean Road through Anglesea (with a quick visit to the Visitor Info Centre) and stopped at the Split Point lighthouse to check out – not just the lighthouse but also the steep cliffs and pounding ocean. On to Lorne and we headed inland to check out some of the waterfalls and see if any campsites appeared. We stopped at a picnic area for lunch and then drove further up to the start of a walk into Kalimna Falls. It was a nice walk probably a bit longer than we expected with some dubious distances on the signposts.

The Anglesea Visitor Centre had given us a list of free camps along this section of G-O Road and we were ready to find somewhere to setup for the night. Along a spectacular, winding, clifftop section, a small valley came into view and a dirt road was spotted off into the Otways National Park. Surely there was a spot we could pull up for the night! So we turned around and headed up the track which got steep straightaway.

Funnily enough it was one of the free camps on our list -Jamiesons Creek – but with no signs anywhere near the road we didn’t realise. The rules said that there was six campsites – each numbered – and you had to camp within those designated areas. We went past Site 1 that had an old caravan but Site 2 was a nice little spot and, not believing our luck, we stopped and claimed our camp. Aim walked up further to check out the remaining four campsites and reported that no one was there so we had options. While we were at Site 2 – we heard some noise and noticed that there was someone camping nearby in the dense bush – maybe 30 metres away. It was a bit off-putting and we decided that we’d go for a campsite up the top instead. Gee, you’ve gotta be quick because a backpacker van pulled up into another site while we were moving the car up. But we got a large flat campsite and got set up.

The next arrival was an Aussie bloke who was trying to reserve a camp for his mates who were coming for the weekend. We said we were settling in for a few days – at least not going anywhere until after the Australia Day traffic snarl along the Great Ocean Road had subsided. He ended up setting up a “save-the-spot” tent next to a backpacker van who said they were leaving the next morning. Then more backpackers arrived……and more….a big Britz Winnebago pulled in. Hardly able to turn around they switched off the ignition where they were and that was them for the night. And they kept coming. Space invaders, privacy dis-regarders, the rule of six campers in designated sites went out the window as the backpacker vans, station wagons and even a Corolla hatchback that was to sleep three people for the night(??) pulled up. So the “six campsites” turned quickly into a carpark for backpackers – 50 people easy. It all got a bit awkward when a large group in sedans pulled up and basically started rudely asking people to move their cars so they could all park together directly opposite us. Lach and Aim were kicking a soccer ball around and that wasn’t acceptable to them either – really they picked a fight with the wrong person and Aim told them where to go – they left in a cloud of dust and I think most people were pleased with that. But no sooner had they driven away, more arrived. Blame the mobile apps – the free camps app and no doubt others are guiding people easily to these spots.

Now let’s not dwell on it because it’s an unfortunate and disgusting part of backpacker travel – but this campsite has no toilet – not unlike many places backpackers stop for overnight stays. And the Britz, Jucy, Wicked, Apollo etc etc campervans don’t provide a shovel to go and dig a simple hole when it’s toilet time. So the result is “surface toileting” where no effort is made to go any distance away from the camp, toileting is done on the surface and the associated toilet paper is left strewn throughout. Disgusting, unhygienic (particularly with kids who need to pick up every stick to check if it’s the right weight for a sword), a blight on the landscape and an indication of the attitude of many visitors who obviously don’t care cause they’ll never be back. Here endeth the rant but surely a basic pit toilet would solve the problem (yes, yes, a toilet would attract even more campers….righto).