Just when we thought Australia Day at Jamiesons Creek had passed uneventfully…..at about 2am a camper further up the hill managed to fall over a cliff and tumble 60 or 70 metres down the slope. Two of his mates – equally as sozzled as the first bloke – decided to go and help him – only to become stuck as well. One then got lost trying to find a way back to the camp. Anyway, by 3am every emergency vehicle within 50kms had arrived and a procession of red and blue flashing lights drove past our tent. Ambos, SES, police rescue, fire trucks, Parks Vic. Amy walked up to the top campsite which was now wide awake with all the action – and also some confusion over exactly what had happened (a car was initially thought to have gone over the cliff). By 7.30 it was all over – the procession of emergency services cars and trucks left, the campsite collectively yawned but got on with the day. No serious injuries but we saw the cliff and the bloke was lucky to walk away.

We decided another day trip along the Great Ocean Road was the go. We headed towards Apollo Bay with the drive passing through several small villages where a gastro outbreak amongst the holiday-makers was well underway – we steered clear of Wye River – in particular – where the caravan park was apparently ‘ground zero’. Funnily enough, we’d noticed the day before in Lorne, lots of people coming out of the only supermarket in town with bottled water – not a just ‘a’ bottle or two…but 24 packs and larger bottles. We thought the water might be a bit ordinary to drink but it was clear now that – as the warnings of gastro had spread to Lorne – people were taking no chances in case the water supply was contaminated….we didn’t fill up any water!

Anyway, we pushed on to Kennett River where we stopped to check out the resident koalas. The foreign tourists were captivated by the king parrots which would sit on your hand (to eat the small packet of bird food you’d just been fleeced for at the kiosk). Once the parrots were full (by 9.30am) and couldn’t sit on a tree branch without their bulging bellies making them off balance, there was no more of the tame hand-sitting…but of course the kiosk kept selling little bird seed packets. 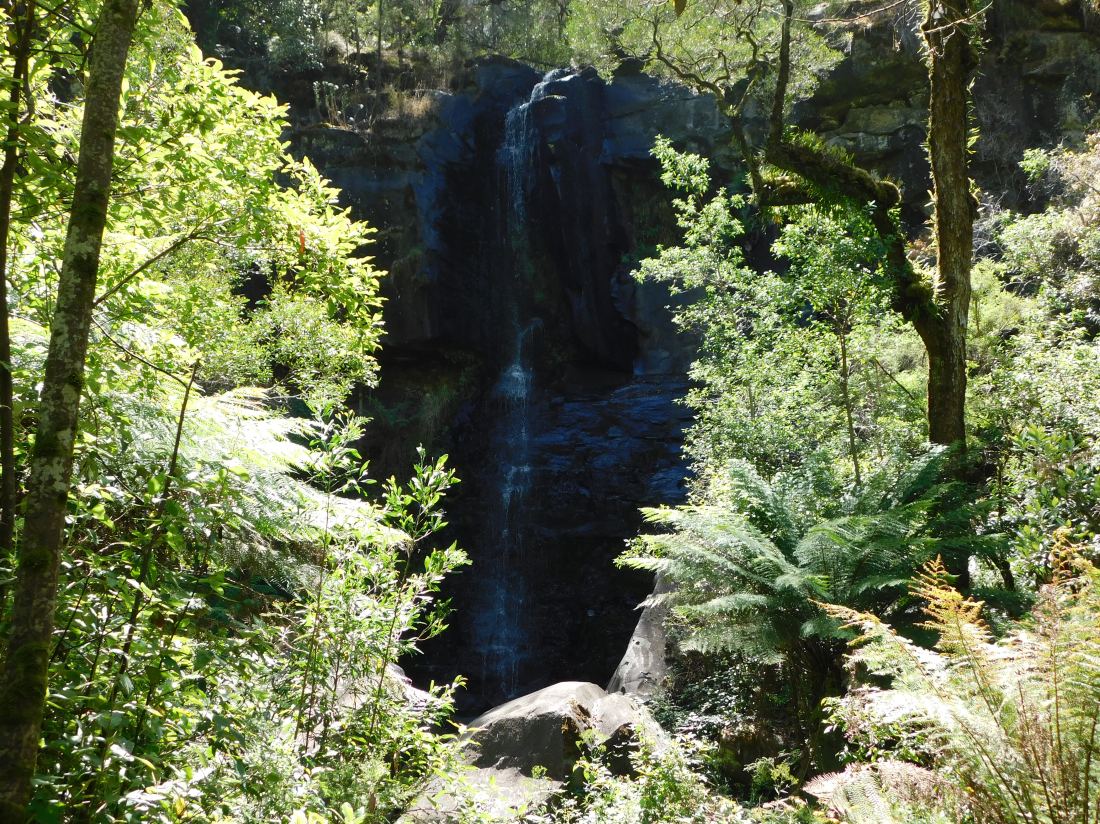 Most of the tourists just wanted to get off the bus and see a koala – and you could because there was one right next to the caravan park. But a walk up away from the tourist mecca led to some spectacular views out over the coastline and more koalas that were much more casual, relaxed and natural.

The area had a massive wildfire about two years ago – during Christmas when the place was chockers with holiday makers. The drive from our camp at Jamiesons to just past Wye River was an eye-opener as to the extent and ferociousness of the fire – there were shrubs – maybe  Bankisas or something – literally on the sand on the beach that had been incinerated. Not a blade of grass survived from the ridges to the beach. You couldn’t imagine trying to flee from that and not even being safe on the beach – plus looking back to see all the houses on the steep slope being wiped out – about 100 homes gone. The rebuilding is happening slowly and the steel construction is allowing for some unique designs and architecture – curved roofs, large decks, bigger feature windows to capture the speccy views etc.

We stopped in Apollo Bay – a real tourist bus stopping point and lots of shops with asian writing to capture the trade. We grabbed a bit of food and then headed up the steep winding road into the ranges and then used the GPS to guide us into the heart of the Otways with a plan to loop back through some tracks and 4WD trails to pop out at our camp. A really nice drive – calm and peaceful compared to the hectic Great Ocean Road along the coast below us. The tracks were in very good condition and the only real 4WDing was the steep descent, rollovers and rutted sections as we neared our camp – a bit of low-range gearing made it pretty easy. We ran into some park rangers on the road down to the camp and had a chat and a bit of a chuckle about the early morning rescue operation. Yes, they received a lecture on the need for proper amenities and campgrounds.