We packed up camp early. No one else arrived so the place was just peace and quiet. We parked up at the crater lookout and headed along the walk that loops around the whole crater rim. It’s a fantastic site to learn about the volcanic activity across this whole region. Apart from a pretty spectacular volcanic crater, there are lava flow valleys and a cave that we thought would be a small cavern – but ended up being a cave that kept going and going. Josh pulled out first as the cave roof became too low and the entrance disappeared from sight. Soon after the fearless leader had turned back, the mission to wherever the depths of the cave was leading was abandoned by the rest of the exploration party. 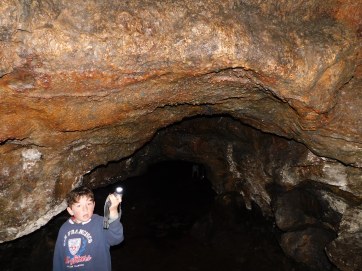 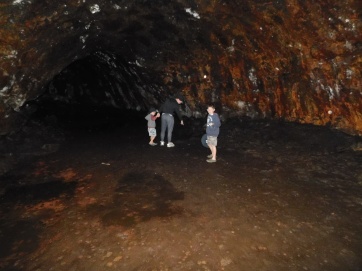 We returned to the morning light and continued our walk which wound through a lava tube gully and then encircled the crater rim with views down into the lake as well as out to the surrounding countryside (mostly flat open plains). Some light rain surprised us as we reached the top of Mt Eccles but a speccie rainbow emerged – one that reached the full breadth of what we could see. And full colour spectrum too – amazing – very difficult to get on photo though!

We headed out through Hamilton to the Grampians. Best described as the southern entrance it is an amazing drive into the hills and cliffs and ridges. We checked a few campsites and decided to head to the larger site further north at Plantation campground.

The campsite was great with a few different areas, basic toilets and a unique bush shower which was a metal bucket and shower head on a pulley so it could be lowered down to fill up with whatever water you had (we cooked up some billys of warm water to mix in) and then raised back up to your preferred height. The ground, for some reason, was like concrete when hammering in tent pegs – maybe it was the old pine tree roots? Once we set up (with a good collection of bent pegs) we headed off for an afternoon exploring the northern section of the Grampians with a particular target of seeing some of the better rock art sites. The northern section is very burnt from a large wildfire that started from a series of lightning strikes which joined together to incinerate the place. Similar to the Warrumbungles, the bush is burnt as far as you can see – from the flats to the top of the ridges – and isn’t recovering in a hurry.  Some areas were also closed with damage to infrastructure and dangerous trees – and one of our rock art sites was in the closed area. But we saw some good art that has been well protected and well preserved under a ledge. Fortunately it was quiet and we could spend some time exploring the rocks.

Back at the camp it was surprisingly busy but we soon learnt that a small music festival was being held in Halls Gap over the next few days and with tickets starting at $200 – people were seeking out the cheaper accommodation. The boys found cicada shells high up in the trees and decided that that would be their quest for the next few days – throwing sticks, knocking down and then stockpiling the shells.