Lach had a sleep in while Josh investigated the grunting noise we’d been hearing. No surprise there was an inquisitive emu wanting to know why humans were hanging around his or her patch of scrub. It did a runner and disappeared. Amy and Cammy called out to say they’d found something and wandering along in front of them was a Mallee Fowl. Not too concerned about us watching and following, it just meandered it’s way along much like a Bush Turkey. 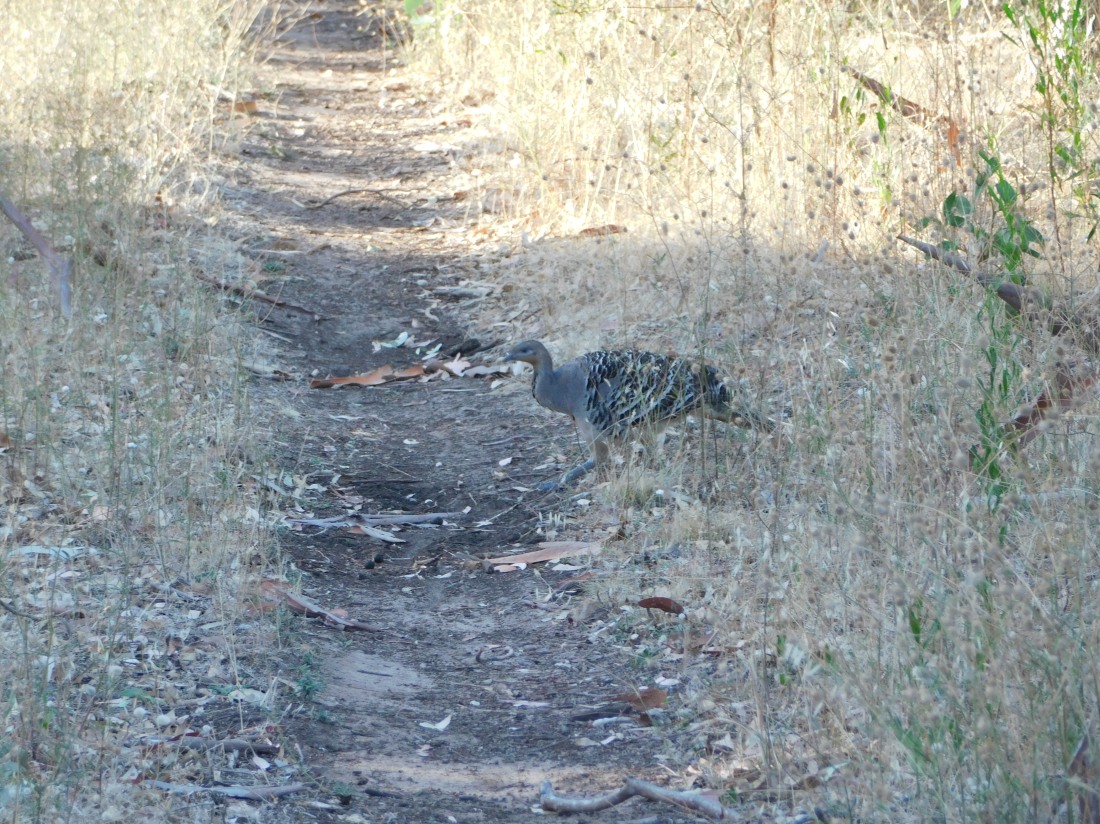 We explored a few more wombat burrows which had much fresher activity from last night than the spot we were watching.

On the road we took an inland route for a short stretch before joining the Princes Highway. As soon as we found the Old Coorong Road we deviated off the highway and made our way alongside the dry salt lakes – spotting emus wandering out there – not sure why. The mirages made it difficult to tell if there was water or not but a walk out on one of the salt pans confirmed they were definitely dry with a thick salt crust and some slippery mud underneath.

After an enjoyable drive we joined back on the Princes Highway and pushed on through what we called “Storm Boy country” – a quick google and indeed it was where the film was made – plenty of Pelicans around although Mr Percival might be long gone these days.

Fortunately we didn’t follow the GPS that said there was a track across from Meningie to Narrung and across the barrages to Goolwa – well… we did start out that way but luckily saw a “No Access to Goolwa” sign almost straightaway and realised we were taking the longer route around. We drove around the edges of Lake Alexandrina and crossed the Murray on the ferry at Wellington. The river was full and flowing well.

We reached Goolwa and drove along the coast to Victor Harbor. A bit of a shop for supplies and Josh also took his brand new sunglasses back to SpecSavers to get them to put the lens that had popped out back in. As it turned out the lenses were incorrectly made and a new pair had to be ordered. Where to have them sent though…? A quick dartboard job and Whyalla was chosen – no idea when we’d actually get there but it was far enough into the future that the glasses would make it there first.

We headed out to Deep Creek Conservation Park and set up camp at Tapanappa campground. The views of the coastline are spectacular. The drive out is mainly cleared, undulating farmland with the park being just about the only remaining native bush. The nearby Stringybark campsite had hot showers so we made use of that. There were deer in some of the open paddocks – only saw two but some other campers said they saw some on the drive in as well.