We took some time getting on the road because we wanted to use the laundry, fill some water and soak up some electricity. We eventually got going and backtracked south to visit some locations we had bypassed on the drive up the highway. Pretty spectacular rugged coastline with some pounding surf. Sceale Bay was a nice little village and the lookouts along the tourist drive were fantastic. We stopped at the sea lion colony at Point Labbat and weren’t disappointed with lots of sea lions as well as fur seals lazing around, including baby seals suckling from their mum. The boys found a sign retelling the Dreaming story about the wombat and the seal – they are learning about Dreaming stories through school and even have to write their own for Miss Swan so it was a good one to read – you can imagine poor old Wombat being jealous of Seal frolicking around in the crystal clear water! 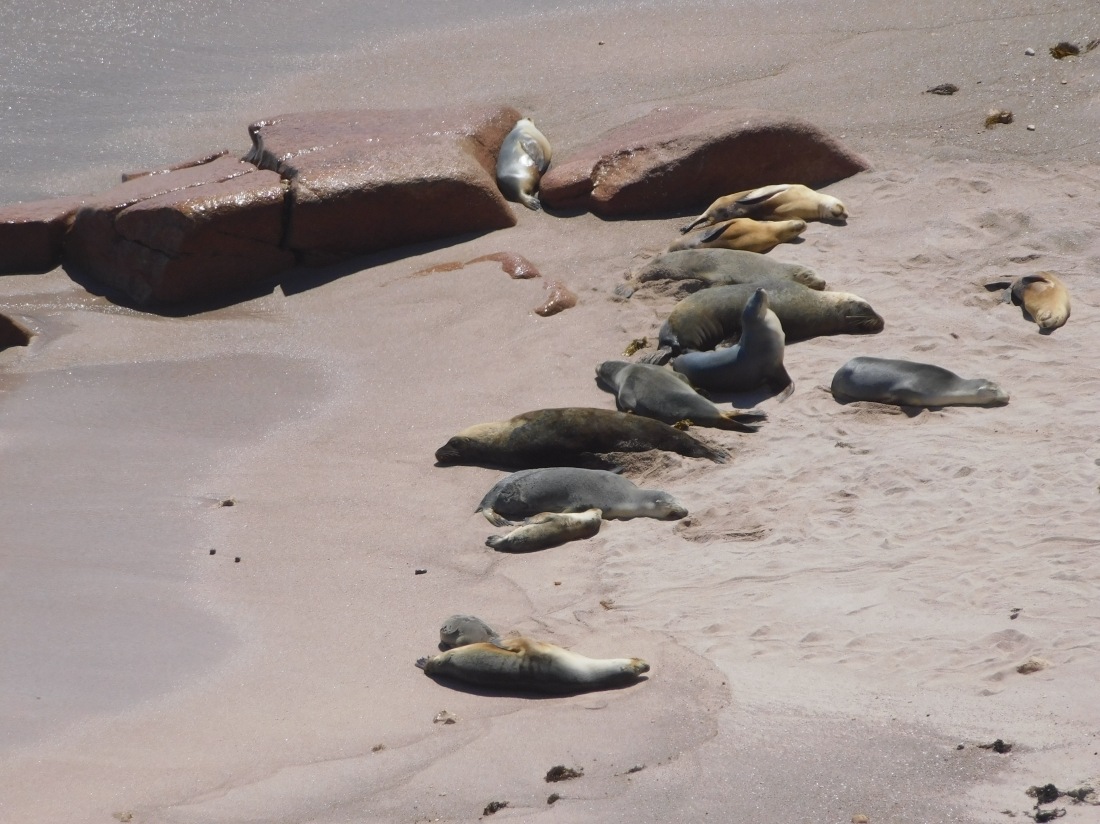 We stopped in at another interesting site called Murphy’s Haystacks. Apparently these large granite outcrops looked like massive haystacks from off in the distance and the name caught on. Really impressive in an otherwise wide, brown, dry and plain landscape. 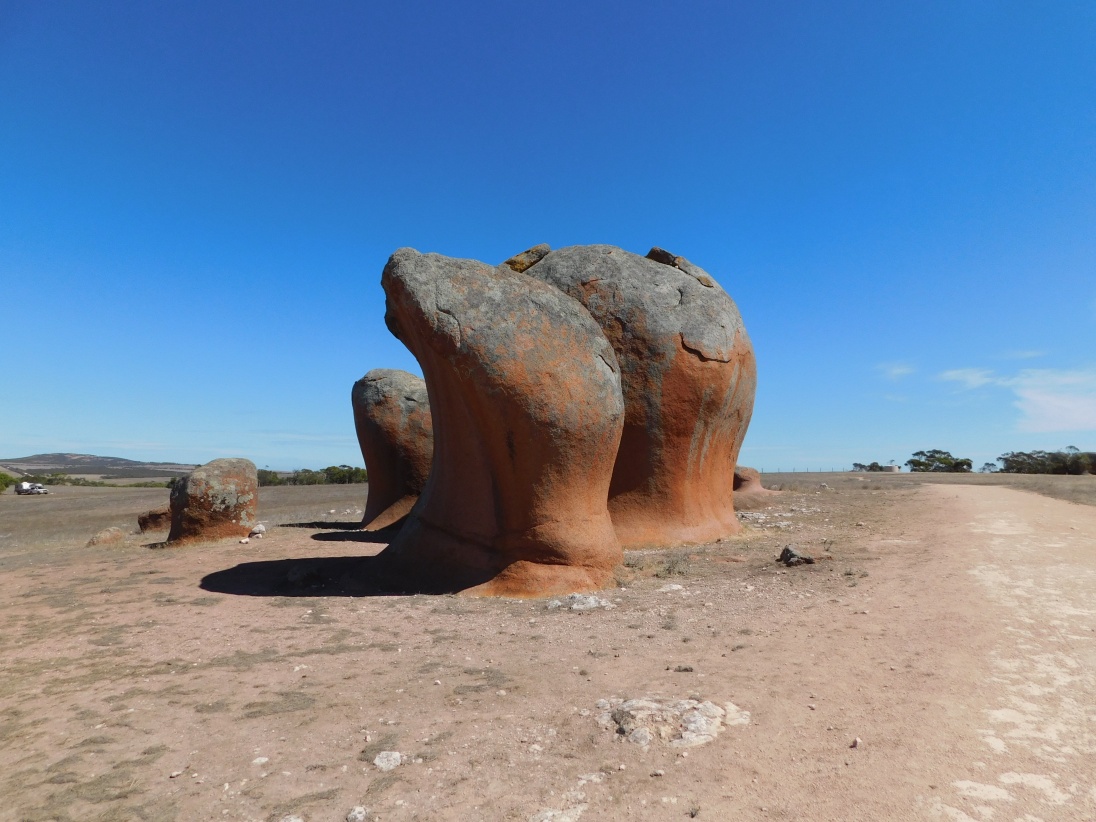 We got back to the highway and headed north again, bypassing Streaky Bay and pulling off about 10 or so kms north to Perlubie Beach. The carpark area was full of caravans – some looked like they were permanently set up – or at least were there for months. We did a quick walk down the beach access track and quickly saw the wide beach had caravans set up a long way along. We didn’t even bother dropping the tyre pressure to get in there, deciding that if someone could drag a 26foot caravan along the beach and up above the high tide mark it would be a cinch in the hilux. We got past the last of the campers and decided to turn around and pull up onto a vacant gap of sand we saw. We put out the awning and settled in to some shade. Once we got a feel for the wind direction we shifted the car slightly for shelter and put the tent up . The wind was blowing but calmed down once we were in bed.

The next morning we decided that the weather forecast of 38degrees left us no choice but to stay another day here. It was an idyllic location.

Rodger and Beverly in the caravan next to us headed out in their tinny for a good day’s fishing. As they started cleaning their catch on the shoreline, in amongst the seagulls and pacific gulls squarking for scraps were two boys – Lach and Cam. For their interest they were given two squid tubes and eight fillets of King George whiting – fresh from the ocean. Running low on food we couldn’t believe we were having a feast of salt and pepper squid and fried whiting with some fried potato chips – all on the beach. Funnily enough Rodger and Beverly had spaghetti bolognaise for dinner! but they were camping there for the next five weeks and were going to be eating A LOT of fish, squid and crabs so we didn’t feel too bad.

The campers in the next caravan along got their kayak off the roof racks and went for a short paddle – when they returned they came along as said we could use the kayak. So Josh and the boys were quickly in the kayak which is very similar to our double kayak at home and went off paddling across the sand flats. We found some big stingrays which we herded around but once they decided to run they were difficult to catch. Cammy then spotted what he thought was a whale and we steered a course for the large movement in the water. The animal was swimming like a dolphin but with no dorsal fin – we were intrigued and decided to have a closer look. As we got closer, a large seal surfaced with a big snort. He realised we were close and gradually moved closer constantly sticking his head out to look at us – a big wet snort each time. Eventually he was swimming near us, under us and around us. It was amazing but a little daunting as we weren’t sure if he was being fun, playful and friendly as it seemed, or whether he was grumpy and we had interrupted his feeding session – just in case the boys kept their hands well away from the water!

Both nights here have had spectacular sunsets out over the water. Overall an amazing spot to land for a few nights.