Our camp at Rossiter Bay was spectacular but – being right on the coastline – the wind got up during the night and buffeted the awning tent we decided to use. The next day it was clear everyone was a bit tired due to the flapping tent. We packed up camp and did a walk out on the amazing rocks and then found the hidden cairn commemorating the explorer Eyre being picked up by a passing whaling ship (a much bigger story but I won’t ruin it – you need to trace it all yourself). 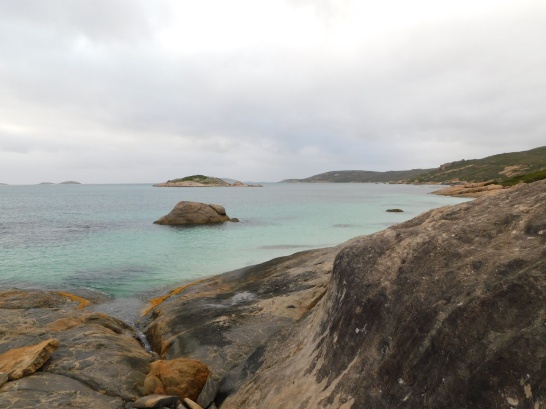 Back into Esperance and the weather was deteriorating – being tent travellers we had always had a plan in the back of our minds to escape a few days of bad weather by using cabins or similar. Esperance – of course – was over the top expensive. Out along the highway and then off a bit.. we saw Munglinup Beach –  a small eco-park running on solar and wind power and composting toilets. Lovely people, great spot with beautiful trees remaining in an otherwise cleared landscape. And best of all – no one around! We organised a basic cabin and the boys had the choice of dart board, foxtel in the camp kitchen or the DVD collection at the office. Lach chose the dart board and gave the poor old dartboard a beating – funnily enough it was ‘Mr Ambidextrous’ Cameron who seemed to nail the bullseye with little effort.

We had a fish in the river and then moved down to the beach where we got more bites. The beach is spectacular and a reef breaks the swell and protects the bay. It was still windy and we got one reef fish which was something. Small crabs would latch onto the bait and not let go as we reeled in.