A smooth camp pack up and we got going. Josh had a few campsite options planned depending on how our driving day progressed – mainly based on the mood of the four people in the car – if it was not going well there were early options to stop; if it was going ok then we could push on. A few people have mentioned that we rack up some kilometres each day and pack a lot of things in – fair point as we’d love to be grey nomads who can drive for 200kms and then set up for 3 weeks at the one spot. There’s definitely spots we’d love to spend another week at – Kalbarri, Cape Range, Shark Bay and Denham for sure, but there’s so much to see and it’s really a case of noting those hotspots down for trips in the future. 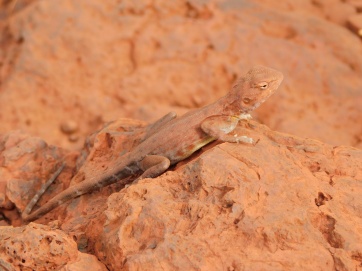 The other big driver of our itinerary is we have a deadline to be in Darwin, family to pick up from the airport and – between now and then – hopefully we can get a good amount of time in the Kimberley region – Josh had always penciled in 3 weeks – that’s now whittled down to probably 2 weeks – we haven’t even had time to check what roads and gorges and walks might be open this early in the season after all the storms and late cyclones going through. 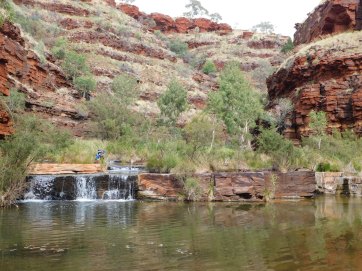 Back to today though and we made good progress. There’s not much diversity as we drove along the highway. We stopped for lunch at a 24hour rest stop which allowed you to get a sense of the quietness and also the birds and reptiles getting around. 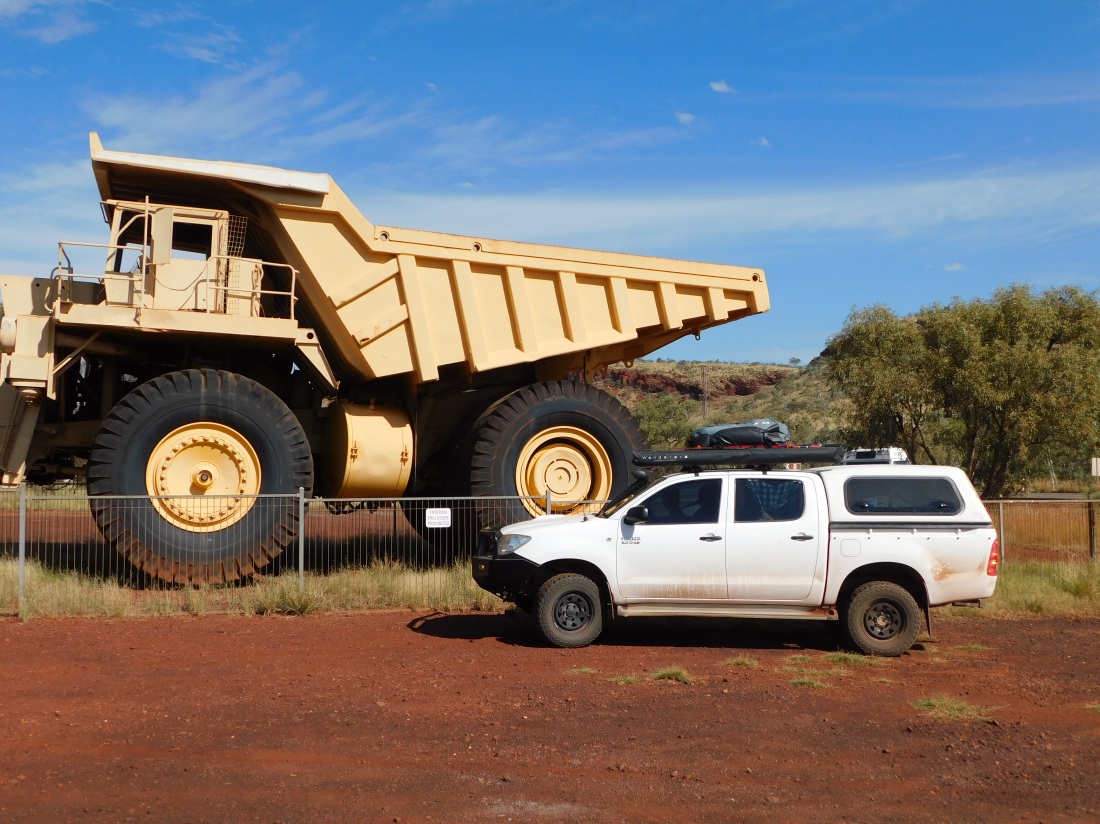 We kept on and made Tom Price – a mining town – and before heading into Karijini Park, we thought a full tank of fuel would be good. With only one petrol station in the town we thought we were being a bit screwed but some investigation showed that all the mining vehicles used a self-serve diesel pump out in an industrial area. It’s basically a large shipping container holding the fuel and you can swipe a card, fill whatever you need and then do all the eftpos payment yourself. No one there, 24 hour access, and…..drum roll…cheaper fuel (as in 10c per litre cheaper by making the effort – 75 litres for us was a $7.50 saving….you can imagine the bean-counter with a smile on her face – that annoying chicko roll back at the roadhouse had been paid off!!). 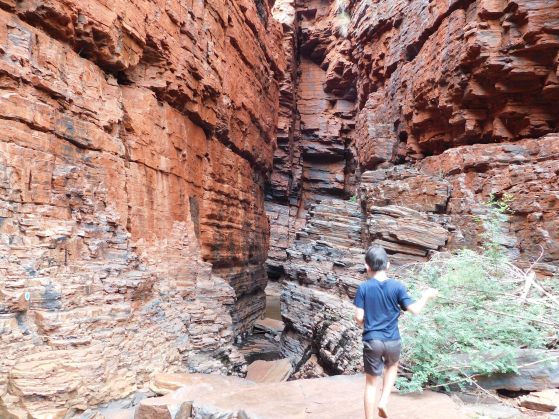 Onwards to Karijini NP – it was a bit of a drive out but spectacular red hills – amazing country. The miners, of course, are into it and most of the traffic you pass is 4WDs with sand flags or road trains. We got out to Dales campground and had to check in with the camp hosts – a unique system where (mostly grey nomad) volunteers get given a spot to stay for free in return for them acting as “hosts’ and collecting camping fees, allocating sites and sometimes some basic maintenance. These people had their work cut out – 140 sites – it was bigger than many caravan parks! Very nice though and plenty of advice on where to go and what to see. Best of all they understood we needed a site that tent pegs could be hammered in (too many national parks and campgrounds are now solely focused on level caravan access and by building campsites up with rock and gravel – tent campers are given a raw deal with surfaces that are impossible to get a tent peg in – should there be a petition on change.org???.

We got a great spot down the back of the camping area – set up and sat down. Big day, awesome country we drove though, time to relax, plenty to see tomorrow.

On Tuesday we headed off from our camp which was in close proximity to Dales Gorge and the various lookouts, walking trails, waterfalls and swimming holes. We did a short woodland walk to the Circular Pool lookout and then descended a steep track down into the gorge. The Circular Pool waterfall was dry but plenty of water was seeping out of the cliff faces making it a pretty scene. The waterhole was full as a result of this groundwater and we had a nice swim to cool off before doing the walk through the gorge. Along the walk we found another great swimming hole that was clear and deep so we had another dip. 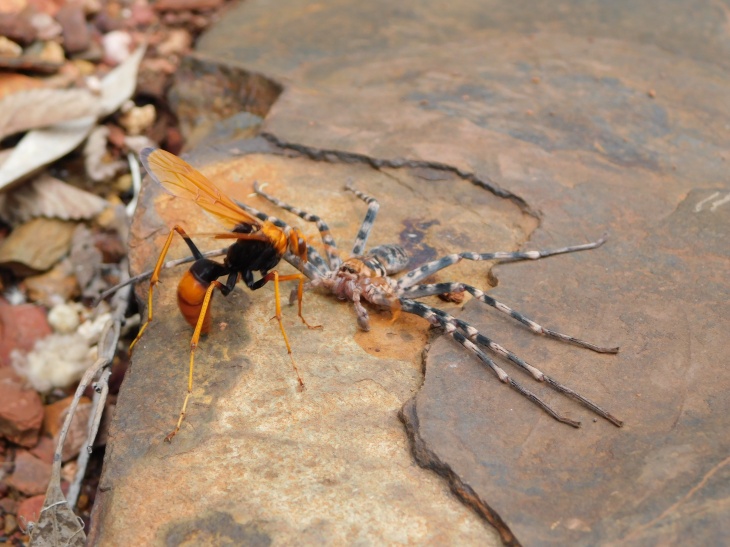 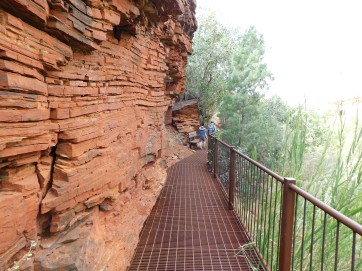 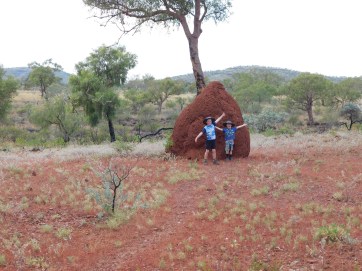 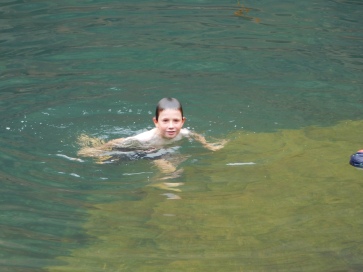 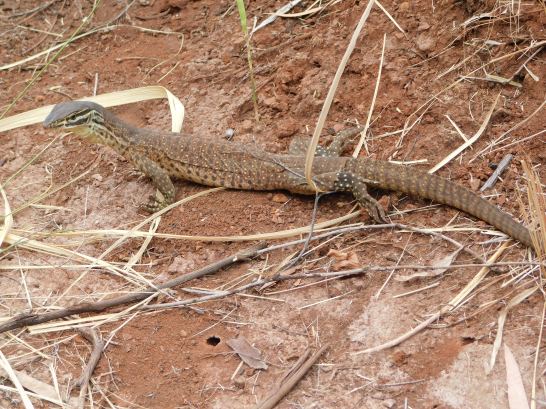 Finally we made our way to the Fortescue Falls and that is a spectacular spot with a cascading waterfall and a large clear swimming hole. We spent plenty of time here and then went past Fern Pool just a bit further up the creek – a large school group had just arrived and the place was very busy but it’s an amazing spot. We decided that it was worth skipping this swim for now and we walked back later in the afternoon when most people had left. The water comes over a seemingly small waterfall but the force and weight of the flow gives a pretty good deep-tissue massage. Once you swim back to the small jetty, you can float around and let the masses of small fish nibble at your skin – at first it’s a bit of a shock when you get a nip but then it’s enjoyable – you pay big bucks in Japan for this beauty treatment. 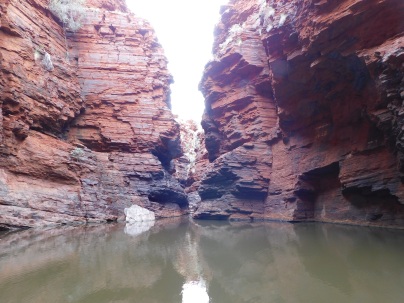 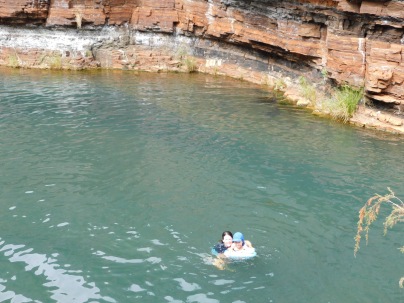 On Wednesday morning we headed out early to the Visitor Centre which has some great displays. Then across the rough corrugated road to the western gorges of Karijini. We walked down into Kalamina Gorge which was very worthwhile – lots of swimming. The worst thing is walking up out of these naturally air conditioned, cool, lush gorges into the heat! We decided on one more gorge and spent some time at Weano Gorge – the spectacular Handrail Pool adventure is pretty exciting – there’s no avoiding the need to at least wade, if not swim to get there. The final 50 metres is through a narrow gorge with flowing water and then a steep climb down into the waterhole using a handrail – quite slippery and dangerous. But it was worth the effort. We’d had enough by then and headed back to camp – the boys had made friends with other travellers so they had plenty of fun together. For our travels tomorrow, Amy, with careful tutoring from Josh, took the Rio Tinto online course to gain a permit to use their private mining road from Tom Price across to Millstream where we were headed tomorrow. The test was passed and a permit issued. 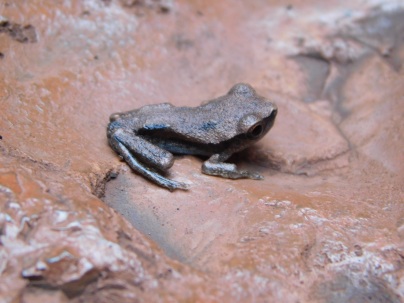