We left Gumbanan camp and got back on the road – cruising the bitumen while it lasted and then ‘negotiating’ the ‘road’ as it deteriorated back to the sandy corrugated rough track. The strangest thing is seeing large caravans and some really big boats being towed in – you’d hope you’re staying up the peninsular for a week if you’ve gone to the effort of dragging any sort of trailer along this road. But, with government budgets about to be announced, there seems to be a strong chance of this road being sealed over the next few years and that basically means the low visitor numbers and quiet locations will be changed by unlimited day visitors from Broome for good (get here asap!). 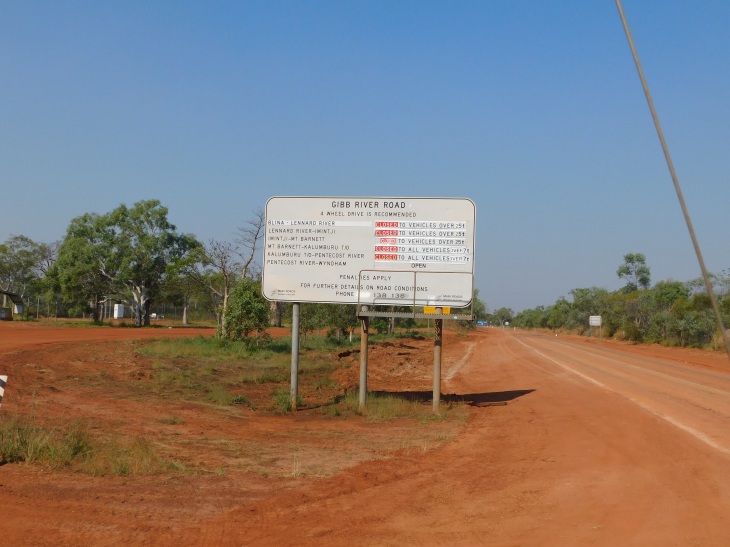 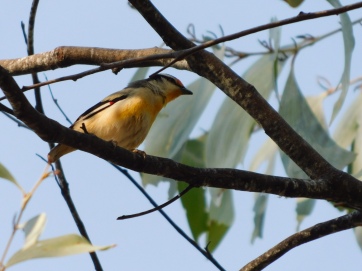 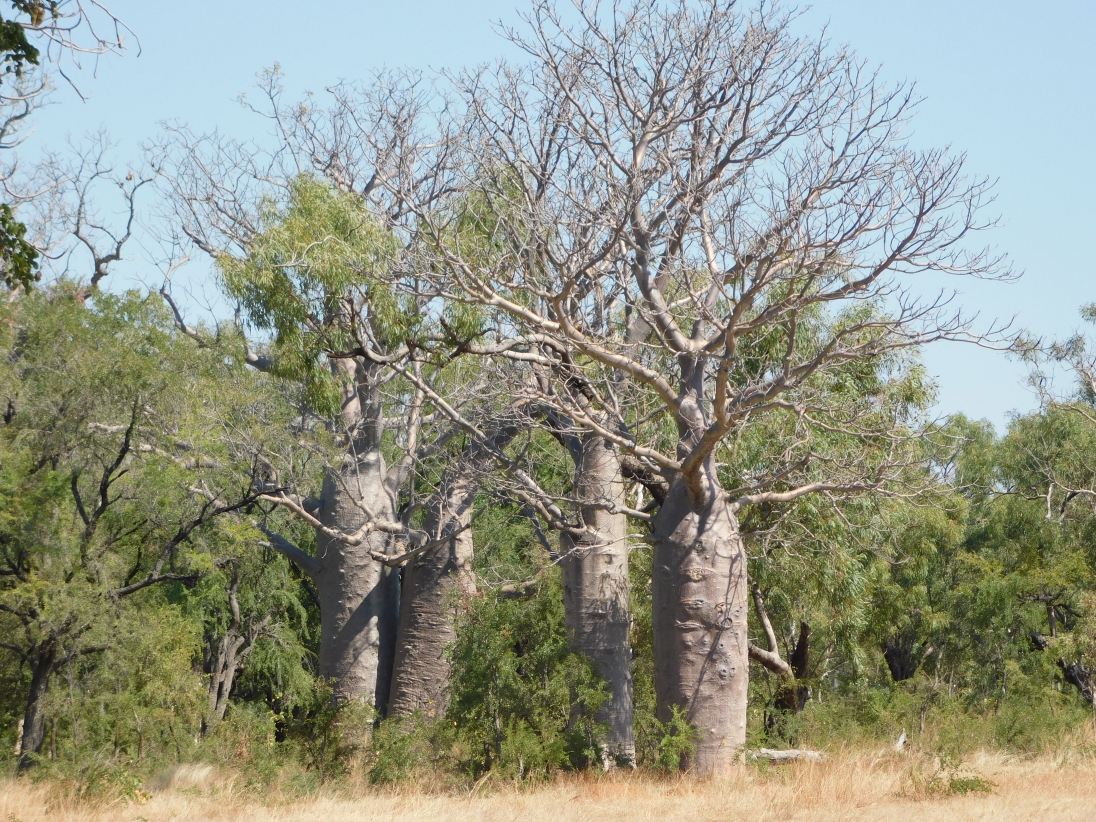 We got back in one piece and decided – with the aid of the WA Fuelwatch app – to leave Broome behind and get fuel in Derby where there was one servo with a reasonable diesel price. The road from Broome to Derby – aka the Great Northern Highway – is really badly damaged from the heavy wet season – lots of sections of road washed away and the temporary repairs are really rough – they’ve done their best to fix it and keep the highway open but geez the car gets bashed around if you’re not careful and watching for the next damaged section.

We reached Derby and knew from listening to ABC radio that it would be a ghost town with Broome vs Derby playing AFL at the oval – we drove past and it was definitely the “local derby” (boom tish). The town has a fairly new Woolies so we did a good shop with an unknown period of time ahead out on the Gibb River Road. We had lunch out at the Prison Boab Tree where ‘crooks’ on their way to the lockup were kept captive overnight – mostly Aboriginals being locked up unfortunately. Funnily enough we could hear the nearby modern-day Derby prison calling inmates who had visitors waiting. Cheap fuel out in the industrial area (just the usual unmanned pump that had substantially cheaper fuel – this one even had a big deep freezer with bags of ice on an honesty system).

Not far out of Derby and we turned onto an icon that we’d always had on our map of Australia – the Gibb River Road. Josh felt like climbing out of the Pope-mobile and kissing the earth – but it’s surprisingly a non-event – there’s no grand archway like the over-touristed Great Ocean Road – there’s no elaborate visitor centre with staff telling you where to go and what to do – it’s just a dirt road and off you go to find your own adventure. Admittedly…we did have a loose itinerary for the Kimberley …jotted down on the back of a piece of scrap paper sitting by the pool in Broome….only to be thrown away in one of the regular purges of unnecessary junk in the car (mainly Lachie hoarding tourist magazines from as far back as South Aust!). So we drove off with a plan to have no plan and wikicamps on the ipad to suggest campsites.

From the outset – completely enjoyable – little traffic – in fact we only passed one car – and then a hilux pulled out from a side track behind us with a full load of passengers – full load means the dual cab is loaded with six people and then the other eight people including young toddlers jump in the back of the ute for the trip – the nice safe trip back home – overtaking us at 100k/hr….we waved back at the smiling faces waving at us but pretty risky driving.

We got to the Lennard River at which point a road goes off down to Windjana Gorge and Tunnel Creek. The “tick-a-box” tourists do this short section of Gibb River Road from Derby, visit the two main tourist attractions and then join back onto the Great Northern Highway – back onto the safety and security of the bitumen they can say they’ve done the Gibb River Road…..and the Kimberley…..and then off they go to Kakadu or Broome or wherever the next major attraction or photo opp is. Annnywhoooo….good luck to them…. 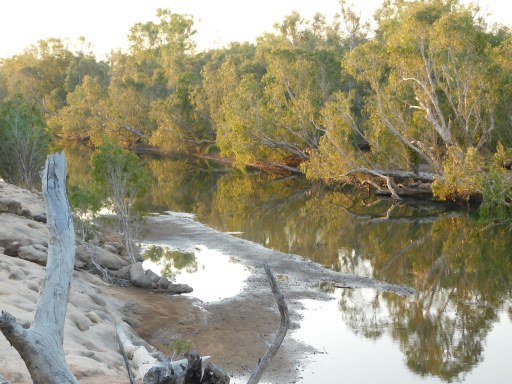 We found a camp near the Lennard River – a nice clearing that quickly filled up with campers. We went for a walk and found a good spot for firewood collection and between the four of us brought back a good supply for the night. We checked the river for crocs but none seen (not meaning they aren’t here of course). Got a fire going – potatoes in foil in the coals and some Kimberley rump steak in the frypan. The usual backpackers needing to camp within 5 metres of us were there – if the aussies think this is the safe spot to camp they have to keep close. No big deal except for the noise when we go to bed early and with such mild nights we leave the tent open for star-gazing and like to have some privacy instead of people metres away.

The next morning we were first to leave camp – but we left our tent set up so we could do a good day trip and have camp to come back to. First stop was Windjana Gorge – we were expecting lots of people but so few were in there. We walked in and if the entrance is spectacular, the inner gorge is unbelievable. The steep gorge cliffs are amazing and we were happy to keep walking up wherever the track took us. 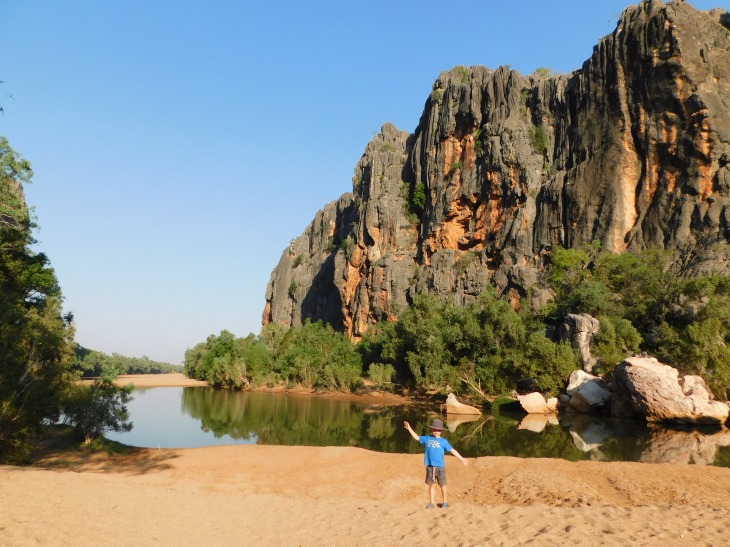 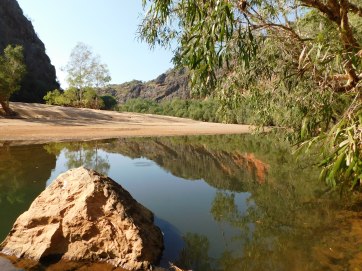 We found maybe 15 freshwater crocs floating out in the creek – the boys weren’t overly impressed with them being so elusive so we kept walking past where most visitors turned around. Unfortunately the parks people hadn’t cleared the track since the wet season and even though the ranger was there telling people they could clamber through the overgrown track….they couldn’t really cause we got as far as you could go without bush-bashing. Anyway, with about five other people making the effort to walk any distance up the gorge, we had the place to ourselves. On the walk back we found the freshwater crocs had started to move onto the sandy beaches to sun themselves and we got up close to a few that fascinated the boys. 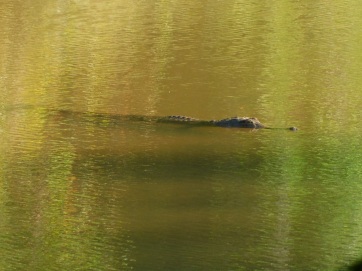 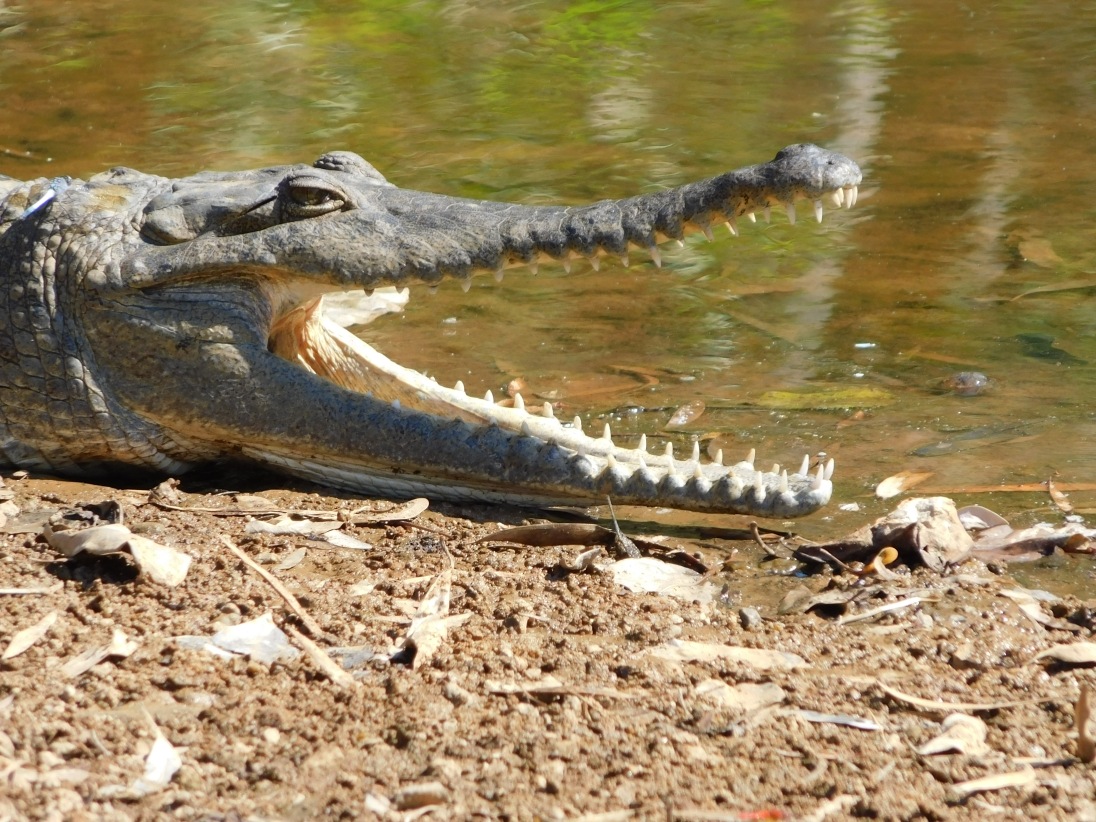 Next stop was Tunnel Creek which we had no idea what to expect. We got our torches ready and headed off. People coming out had different levels of wet clothes – some obviously having found a shallow path through the creek while others had sunk in the deeper sections. The creek has weathered a tunnel through the rock creating an outstanding natural feature.

We walked through the first section spotting some microbats in a crack – some flying around in short circuits in the darkness. An opening halfway along the 700metres of so tunnel gives a brief glimpse of daylight before continuing on. Some people have seen croc eyeshine as they walk through but we didn’t. We checked out some rock art that gives an indication of the use of the cave by the Aboriginal people – a hideout for the “freedom fighter” Jandamurra – who was eventually tracked here and shot dead after a prolonged war between the police and the local tribe. At the other end there was a small pool in the creek and a handful of people were immersed to cool off. As they left the water and walked away, a freshwater croc floated to the surface right where they had been standing in the water – very tolerant of the croc we thought to not snap someone’s heels.

We stopped in at the ruins of an old homestead which was the police station at one point and central in the jandamurra story. Impressive construction with a flat rock floor and solid limestone rock walls that are still looking stable. 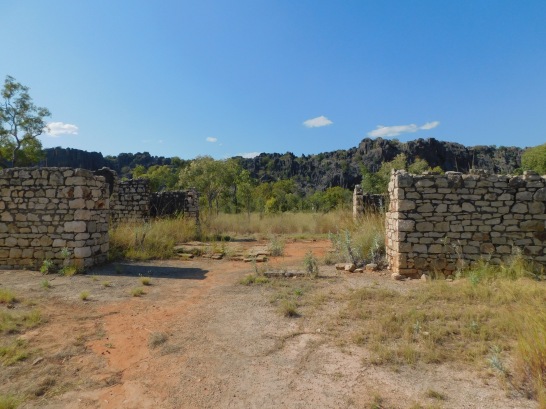