On Monday we headed along the Gibb turning off to the Silent Grove campsite run by National Parks. We decided to set up camp early and then do the trip out to Bell Gorge. We got a nice shady campsite in amongst some boabs and other trees. Once setup we did the short drive out to Bell Gorge and then along the rough walking track. Once at the creek there’s a great view from the cliffs above down the waterfall into the gorge. We kept well clear of the cliffs which are pretty treacherous (Lennard Gorge nearby is permanently closed after a few terrible accidents). The last part of the walk is a steep but fairly short climb down the rocks into the gorge and the beautiful swimming hole. An amazing place. We had a great swim in the enormous pool. Drifting downstream where most people don’t get to is highly recommended as there is a smaller waterfall and then a bubbling, frothy spa pool that you could sit back and relax in for hours. 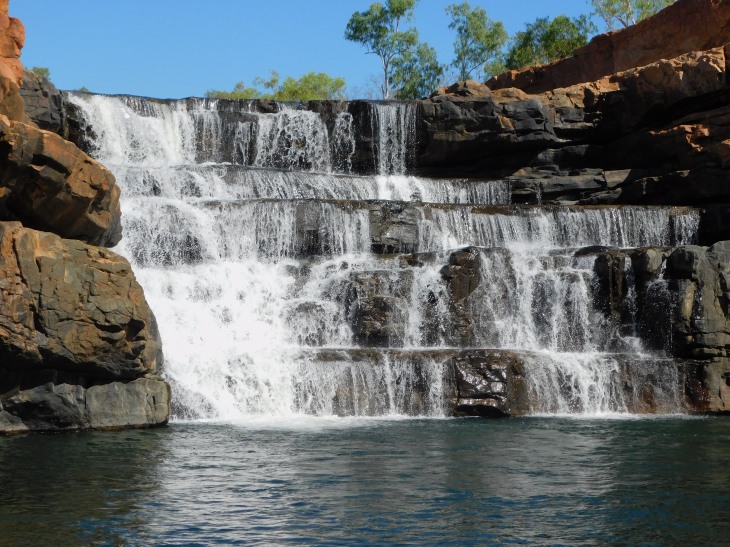 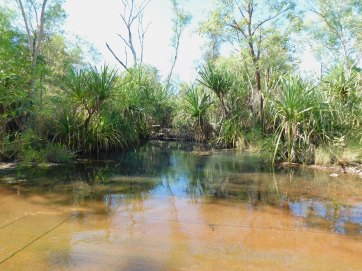 We headed back to camp throwing some firewood in the back along the way for tonight’s fire. We cooked up dinner and settled in for the night. Interestingly enough the camp caretaker came around for a chat and told us three other cars that had come along the same route as us from Windjana had pulled in with flat tyres so we were pleased to have made it through. Unfortunately we weren’t successful spotting the Olive Pythons and Quolls that hang around the ranger station. 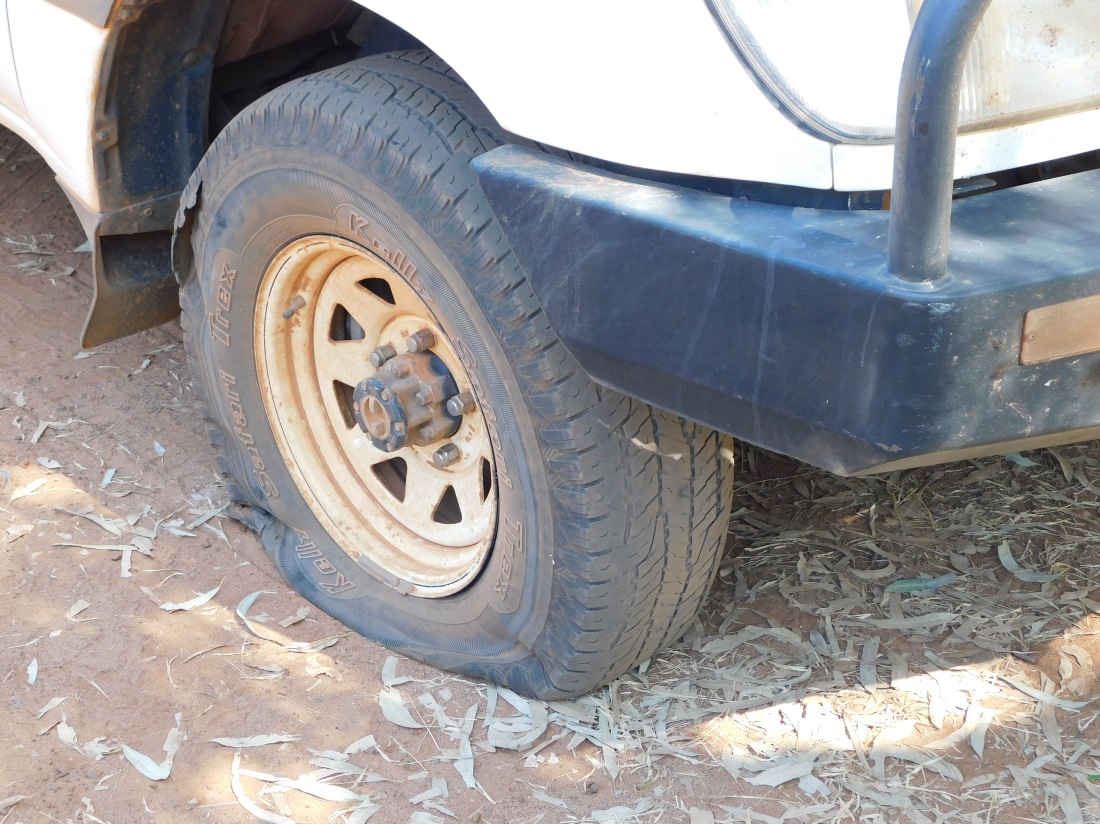 Tuesday morning and we made tracks back onto the Gibb. Not a long drive before we got to Imintji Aboriginal Community and we pulled in for a fuel top up – having been told that the price of $2.45/litre was better than fuel stops further along. Luckily enough the price was down at $2/litre and we decided a full tank would get us through the rest of our Gibb River Road trip. Interestingly enough an optus satellite installation provided top-notch mobile reception so we made good use of that. Back on the road we drove into Adcock Gorge that is skipped by many people. Track in is ok and we chose to park and walk rather than drive through the last murky creek crossing. There’s some nice wetland ponds with clear water and lillies. 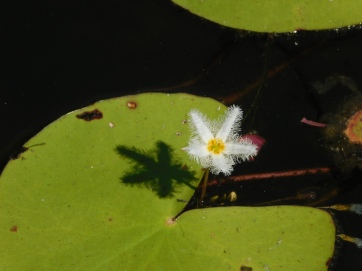 The gorge is a beautiful large swimming hole with a high waterfall that is not a huge torrent – in fact it probably starts to dry up to a trickle not too far into the dry season. A fig tree at the very top of the falls has a root system that creeps all the way down the cliff face tapping into the moist cracks. There was a good rock platform to do some jumping into the clear water. We spent plenty of time here with only a handful of people who were leaving or came and went quickly. 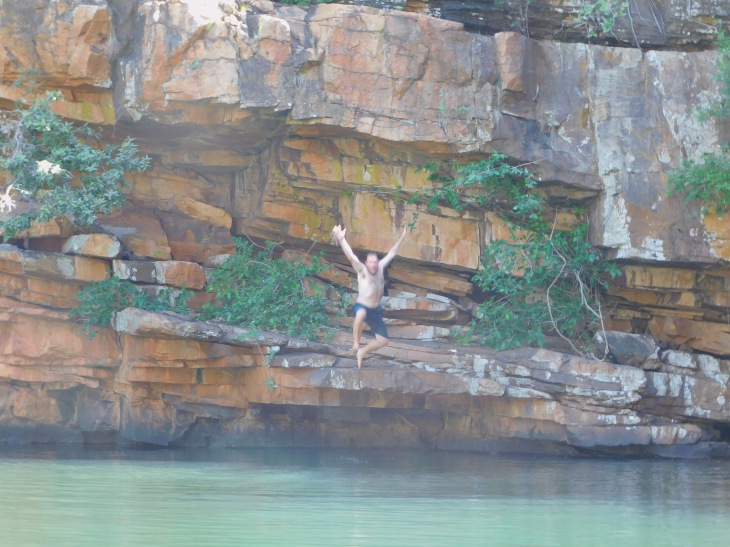 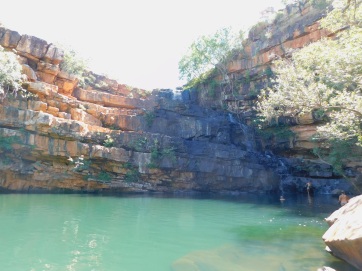 We looped around to the creek at the top of the falls and found a good campsite with a nice section of water to camp next to. The boys had a fun time swimming and the adults kicked back. One other car and one small tour group bus came in looking for camps but both found spots further along far away from us. Just before hitting bed, we heard a car coming along the Gibb – not many cars (i.e. none) were usually heard after dark. As it got to the creek crossing just upstream of our camp, the driver must have seen some water on the crossing (about 3cm deep!), panicked and managed to lock the brakes skidding along the road. Realising the water was a shallow trickle, they started off again only to hear the thump-thump that tells you you’ve blown a tyre. Took them about half an hour to replace and get going again. 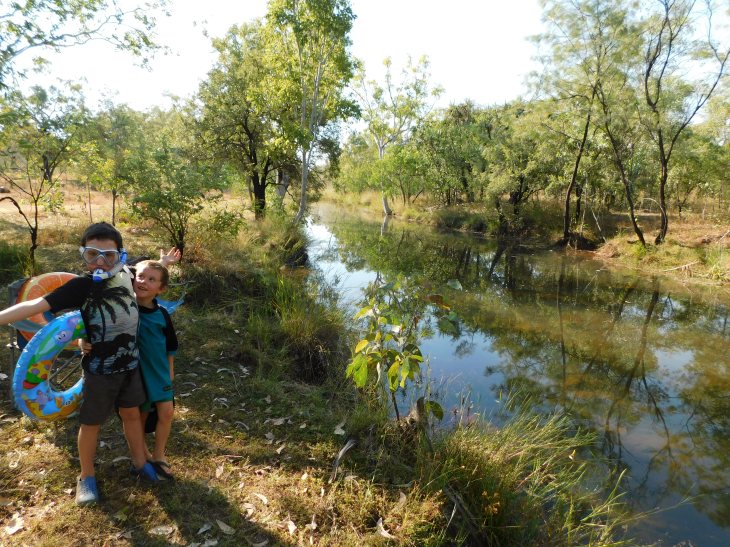 Wednesday morning we headed for Galvans Gorge and were surprised to find no other cars in the parking area. Some of these smaller gorges get bypassed by people who only have a few days to “see everything”. Happy with that we headed in along an easy creekside track and came to a great swimming hole. The grand feature is the boab tree at the top of the cliffs. Two goannas sitting on their rock island glanced at the annoying humans but otherwise just ignored us. We swam for probably an hour and a half before anyone else arrived. 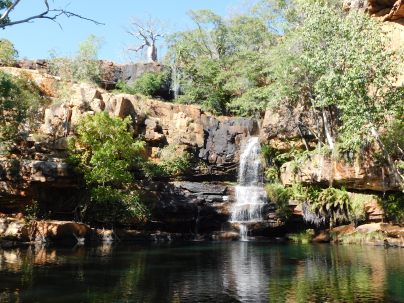 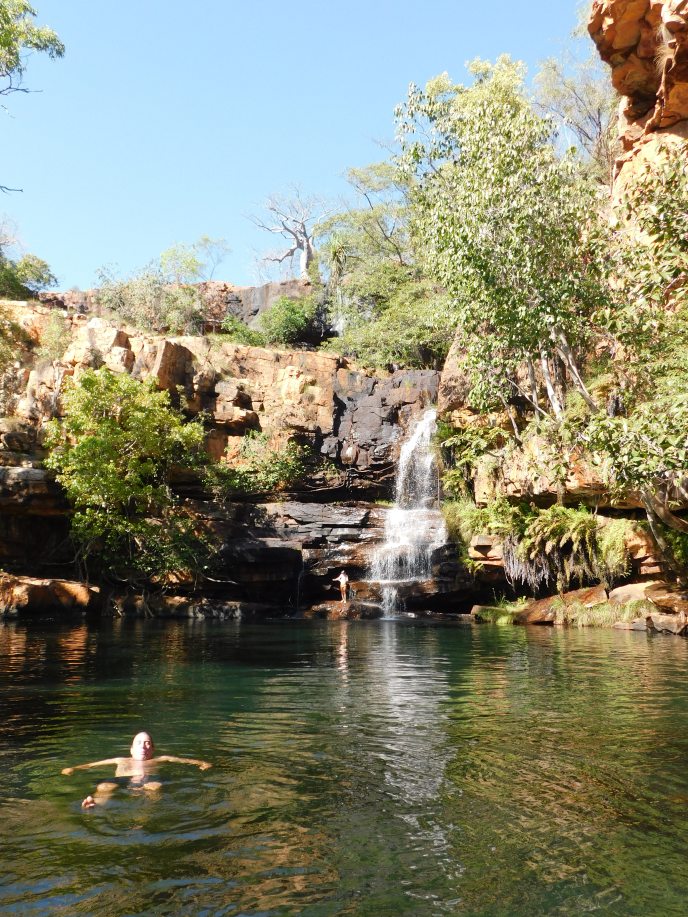 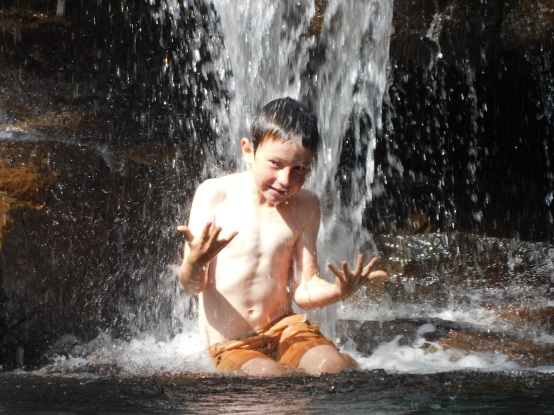 As we left the car park was full and a small tour bus had landed a dozen or so people to fill up the swimming hole. We had a good chat to some people about Manning Gorge and the camp at Mt Barnett Station where we decided we would stay tonight. It wasn’t a long drive and we arrived at the Mt Barnett roadhouse. We booked in for camping and drove along the track to the campground on the creek. There was a hamburger and hot chips lunch smuggled in from the roadhouse. The creek at the campground is wide clear and sandy – a beautiful spot to swim. A small dingy on a rope pulley system allows walkers to cross the creek without getting wet or having to take hiking boots off. We decided to swim here for the afternoon and do the gorge walk early in the morning due to the heat and little shade on the walk. 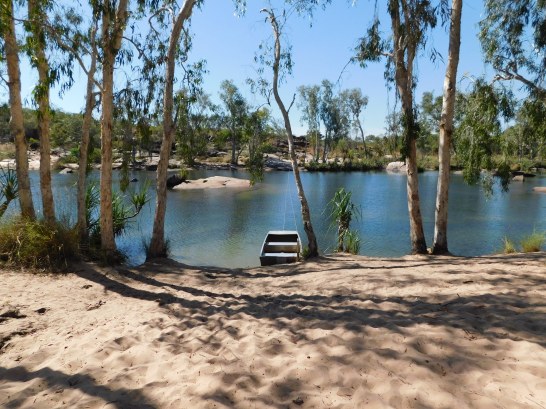 Thursday morning we were up and at the crossing at 6.30. Various tour groups who camp in the permanent tents here were stirring and we decided to try and hit the track before they did. Josh and the boys ended up swimming across while Amy got ferried across on the dingy with shoes and backpacks. The walk was pretty easy really but took a while winding over rocky ridges and eventually climbing along and down the cliffs to the base of the waterfall. Another beautiful spot – all the better with only one couple having just arrived ahead of us. The waterfall pumps a huge torrent of water over and we could swim out and through the deluge. Under the falls was a small bench we found we could sit on to have a break. A bit of jumping off the rock ledges was fun too. 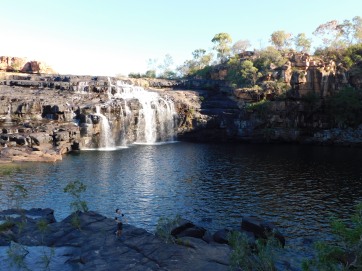 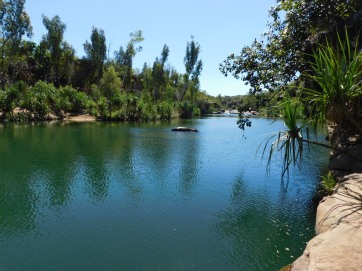