We departed Mt Barnett Station and got back on the Gibb. The first river crossing is the Barnett River and the crossing was surprisingly deep being so early in the season. We decided to drive into Barnett River Gorge which was slow going but not a long drive. This one is definitely off the main tourist trail and the track is difficult to follow after the floods have come through and then the plant growth has been prolific. We eventually got to the plunge pool and it’s a nice stretch of water. The big boabs are a great feature of the area too. We did a quick swim – literally a single jump in to cool off (looked like great croc habitat) – and then headed back out. 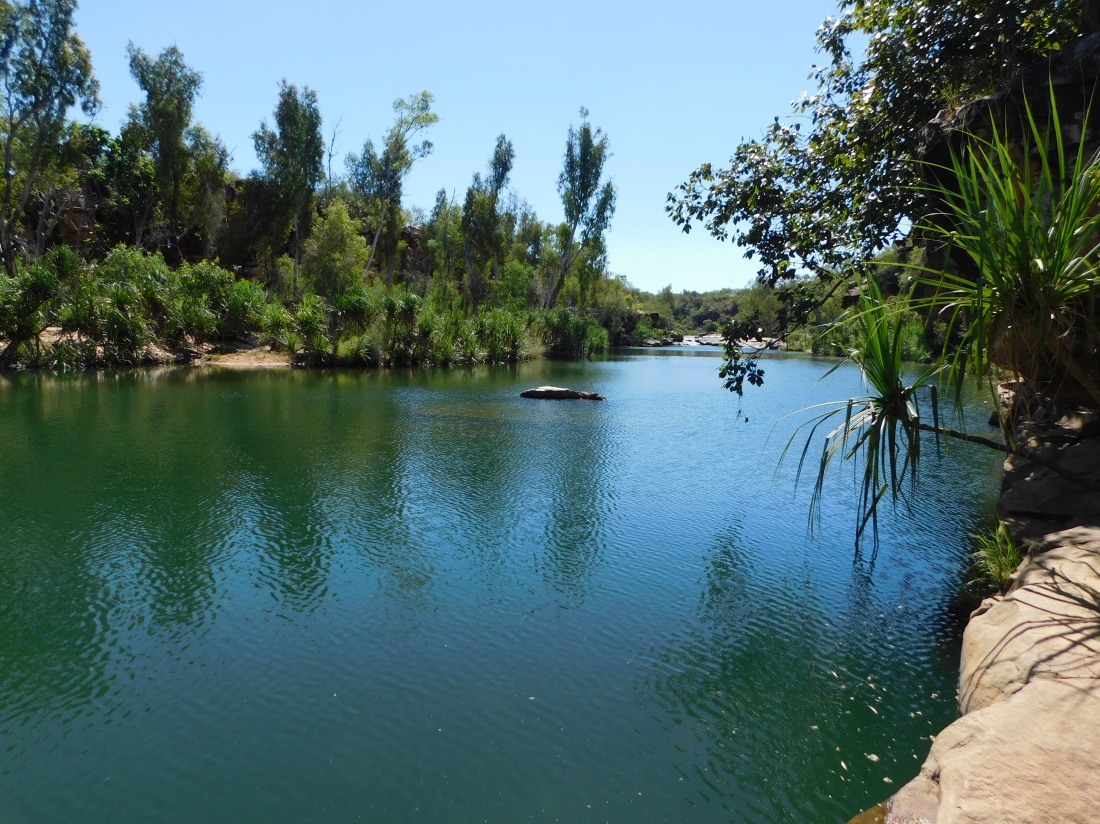 We had a fair drive ahead – distance wasn’t so much the issue as the road condition as we were turning off the Gibb and onto the Kalumburu Road to take us out to the Mitchell Plateau. As always, different people give different road condition reports but we knew that it wasn’t going to be easy going. The road had just re-opened and there was machinery at work fixing damaged sections after the wet. The stretch from the Gibb intersection to Drysdale Station was pretty bad – in fact the worst wash-out and the most awkward bone-rattling bumps we’ve encountered were just near the station entrance. Once past here though, the road got markedly better – still lots of vigilance required though. 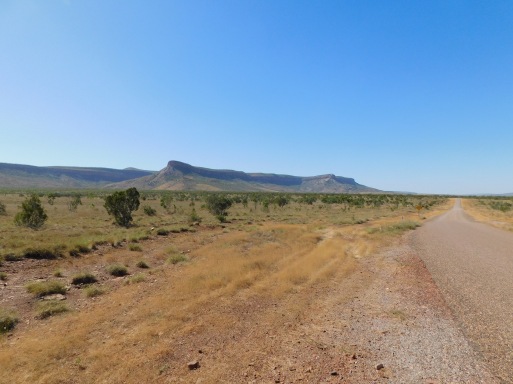 We decided to drive as far as we could and then find a camp for the night. We had entered a new station and decided to back track to a roadside clearing we had just passed – a quarry/road work stockpile area. Far enough away from the road we thought we’d be away from any traffic….we heard one 4WD and one truck before dusk and then nothing for the rest of the night. Amy spotted our first Bustard of the trip. The cattle made a bit of a racket in the distance and some dingoes came pretty close during the night howling away. We had a small fire and cooked some jaffles for dinner.

The next morning we were packed and on the road early. The drive out onto the Mitchell Plateau was spectacular and we wonder about people who complain about having to drive slowly out here in the Kimberley. You can’t see everything no matter how fast you drive around so you might as well enjoy the trip. The boys were especially excited to spot our first Frilled Neck Lizards. 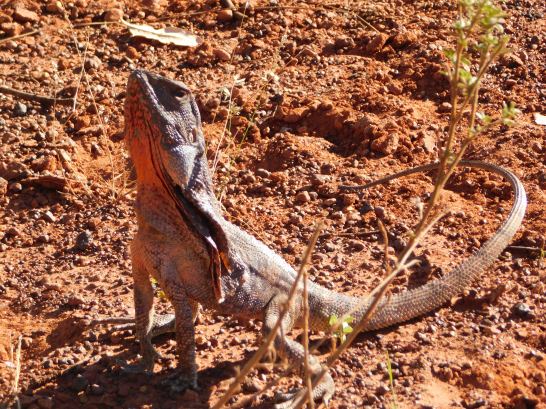 The lush green Livistona palms are thick throughout the woodland and the burning season is well underway so we drove through lots of smoke and fires trickling through the bush. The raptors are circling on the hunt for the escaping critters and we saw a dingo sifting through the burnt ground hoping for an easy feed. 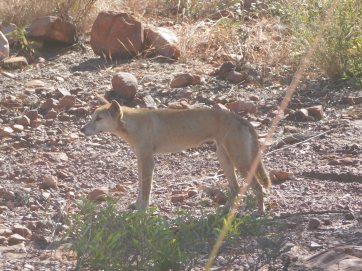 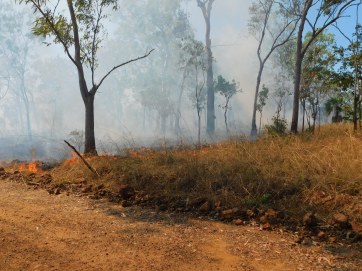 Soon after the turn off from the Kalumburu Road (which is still closed) onto the Port Warrender Road we were soon at the King Edward River crossing which was the best river crossing so far. Some tour bus folk were down there to film us driving through. Once through there’s two main rock art sites to visit featuring the Wanjina and Gwion Gwion or Bradshaw art plus lots and lots of other images everywhere you looked. 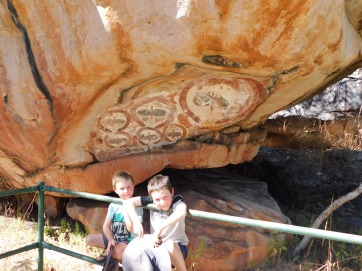 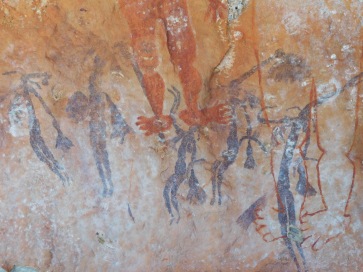 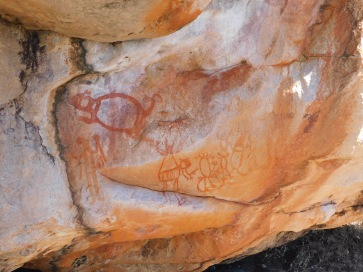 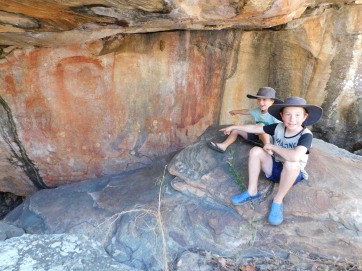 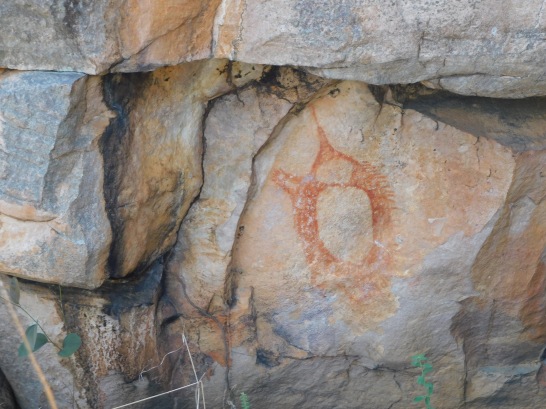 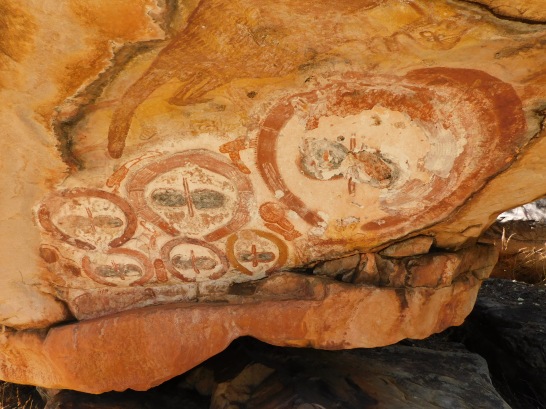 We eventually made it into the Mitchell Falls campground and were surprised at how many people were camping considering we saw hardly anyone on the road. We found a campsite and set up. A short walk down the main track and the Little Mertens waterfalls provide a great swimming hole with rockholes and rapids. 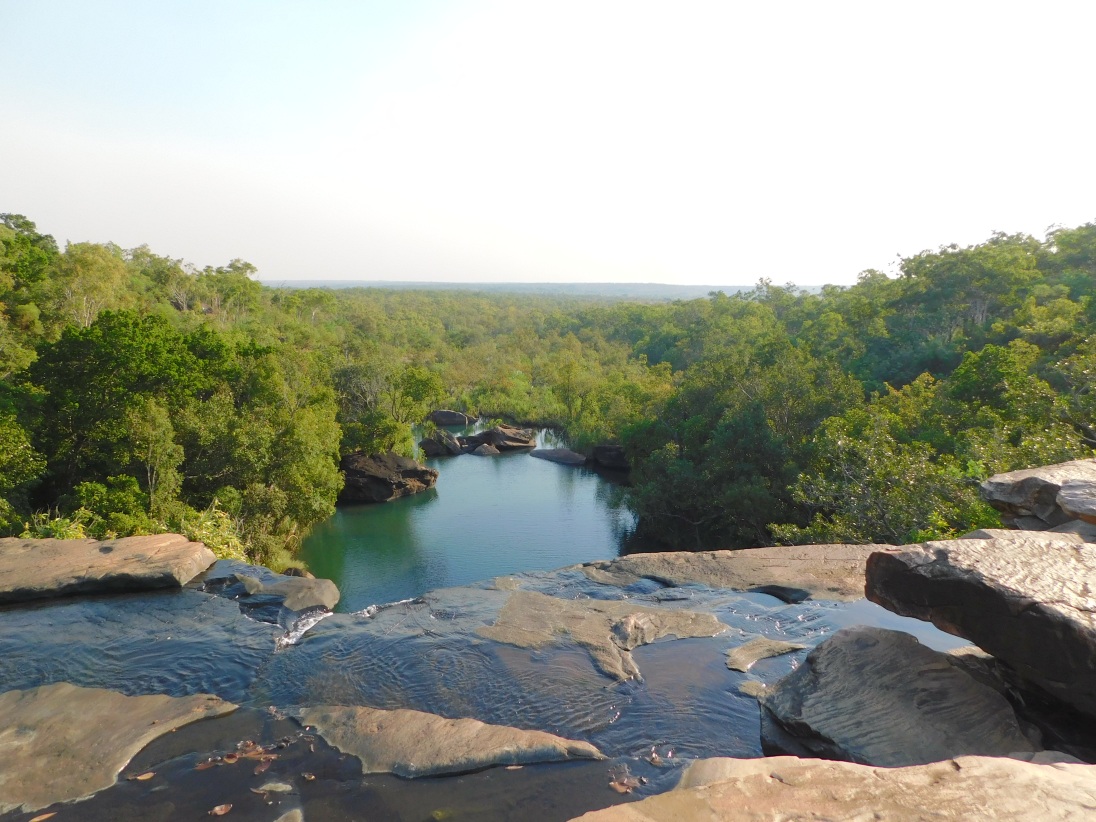 We headed back to camp and got a fire going. Some good coals called for some potatoes in foil to be thrown in. A beaut sunset and lots of birds made it a very pleasant evening. 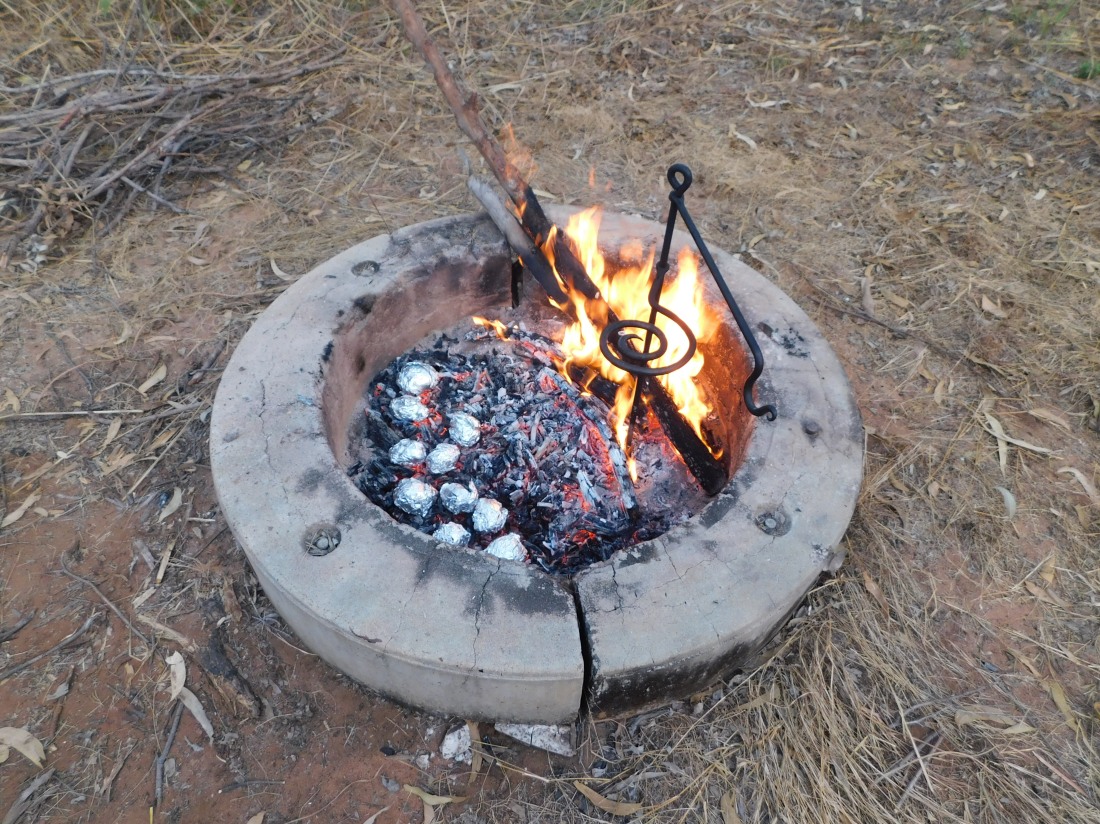 Saturday morning we got organised early and headed over to the helipad to book in a flight back from the falls at 3pm. With that sorted we began our walk with a plan to take it easy, swim in every spot we could and detour off whenever we saw a side track. The first detour was out to a lookout with expansive views across the Mitchell River landscape. Along the way there were Aboriginal burial sites but we couldn’t distinguish any particular spot – most likely the main rocky hill we wound our way around was the location.

We continued to Little Merten’s Falls where we swam yesterday arvo. We walked down around to the base of the falls and – on advice of our next-door camper from last night – we climbed in behind the falls to see some great rock art – lots of different pictures. We continued on finding more swimming holes and more rock art wherever the rock overhangs were suitable to protect the art from the elements.

Big Merten’s Falls are nice and the view down the gorge is amazing. It’s not a difficult or time consuming walk at all and we were soon out at the crossing across the Mitchell River – probably the only real ‘difficult’ section because the river flow is strong, there’s slippery rocks and most people are carrying backpacks and clinging to cameras. We also had to cling to two children. 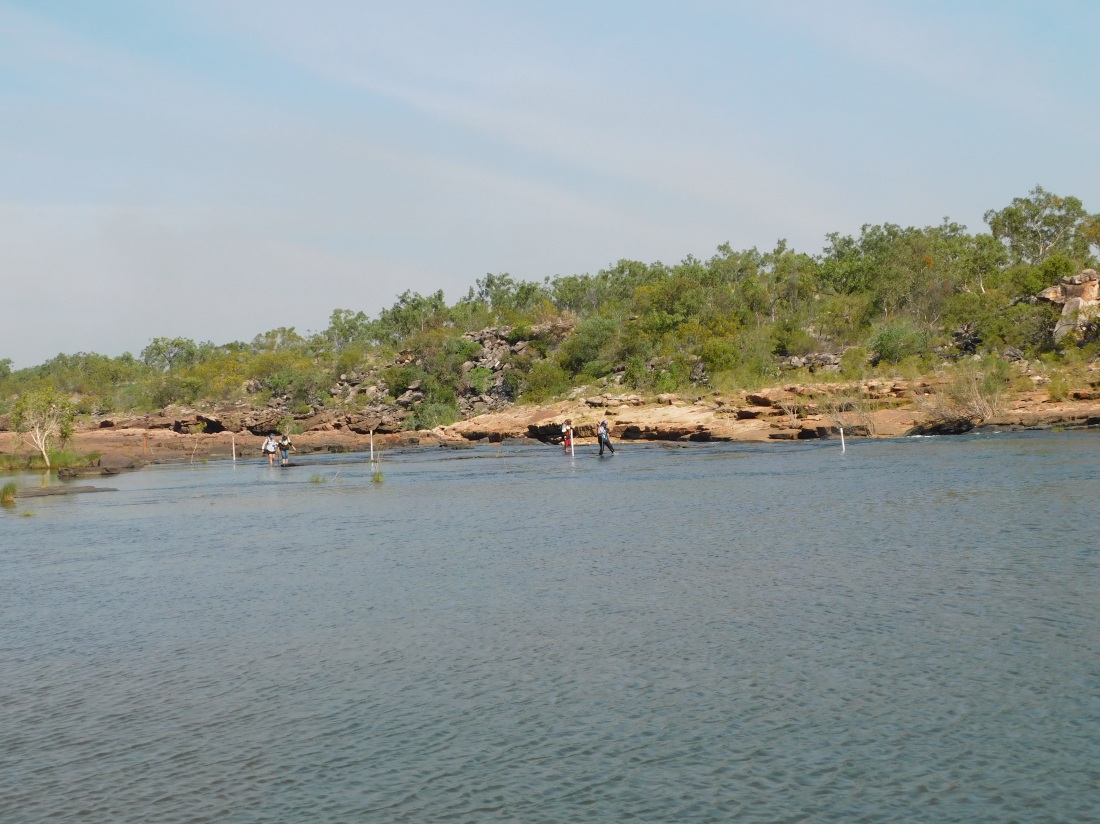 As you arrive you see the top two falls fairly close up if you make the effort. Once across the river you can carefully navigate your way out to the steep, very very steep cliffs across from the falls so you can see the view the full set of falls. Apart from the spectacular sight of the Mitchell Falls, the outstanding experience here is the incredible noise and the ground-shaking roar of the water that is pouring through. Such an incredible volume of water after a pretty rainy wet season.

The chopper came and went almost on the hour as people who had walked in were airlifted out with a few laps around the falls to really take it all in. After the 2pm chopper was gone, we were left out there by ourselves for an hour until we heard the chopper returning. Amazing experience being so isolated – we really relaxed and enjoyed it. 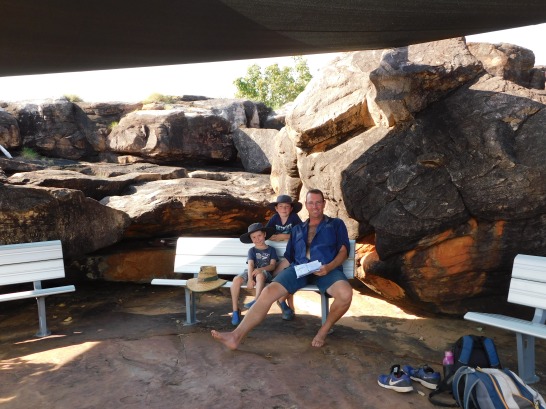 Then the chopper ride back was cool too. Lachie took co-pilot in the front. Josh and Amy with Cam in the middle took up the back seat. The back seat didn’t have any doors so the seat belt was fairly important! It’s only a short ride back to the camp and we got some great views of the main falls as well as the smaller Mertens falls and gorges we had walked through to get here. We had this chopper ride on our list of things to do so it got a big tick. Another nice evening in camp. 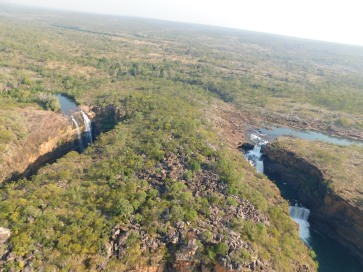