We stopped in at a few wetlands for some birdwatching on the way out from Shady Camp and crossed the highway onto the Old Jim Jim Road. The campsite we were heading for at Black Jungle Springs was overgrown and deserted – the national parks people hadn’t got here yet to prepare it for the dry season. They’d put a croc warning sign up and we decided we could do better (safer!).

Jim Jim Billabong was our next stop but it too was still closed after the wet so we ended up in Mardugal campground which is one of the larger, more organised sites with amenities blocks and a campground manager. We got a nice campsite in the tent section which was nice and bushy and shady – the caravan section was a much more open cleared area. 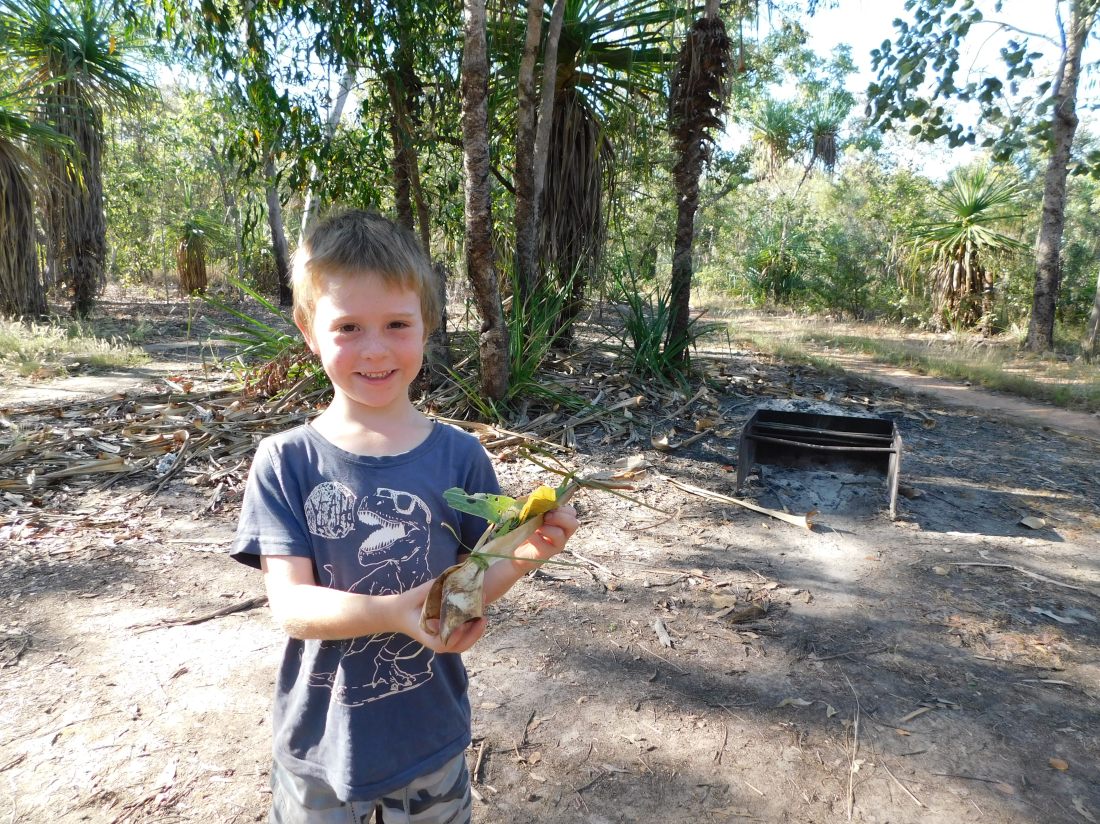 We decided to do a Yellow Water cruise and ended up getting a deal where we could do a sunset cruise and then a sunrise cruise the next morning with a buffet breaky back at Cooinda Lodge. Both cruises were great – fantastic birds, good sized crocs and even saratoga and barra below in the clear water. 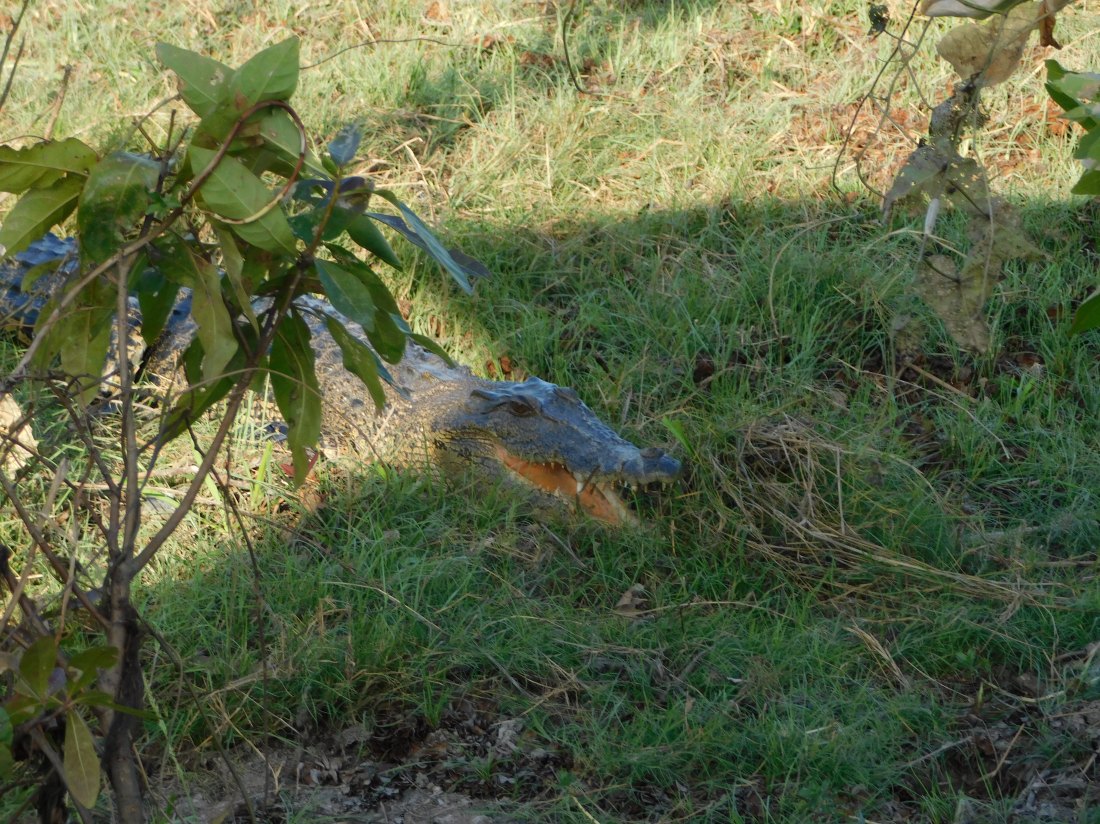 Jacana chicks climbing up under their mum’s wings so just their stick legs were poking out were fun to watch. 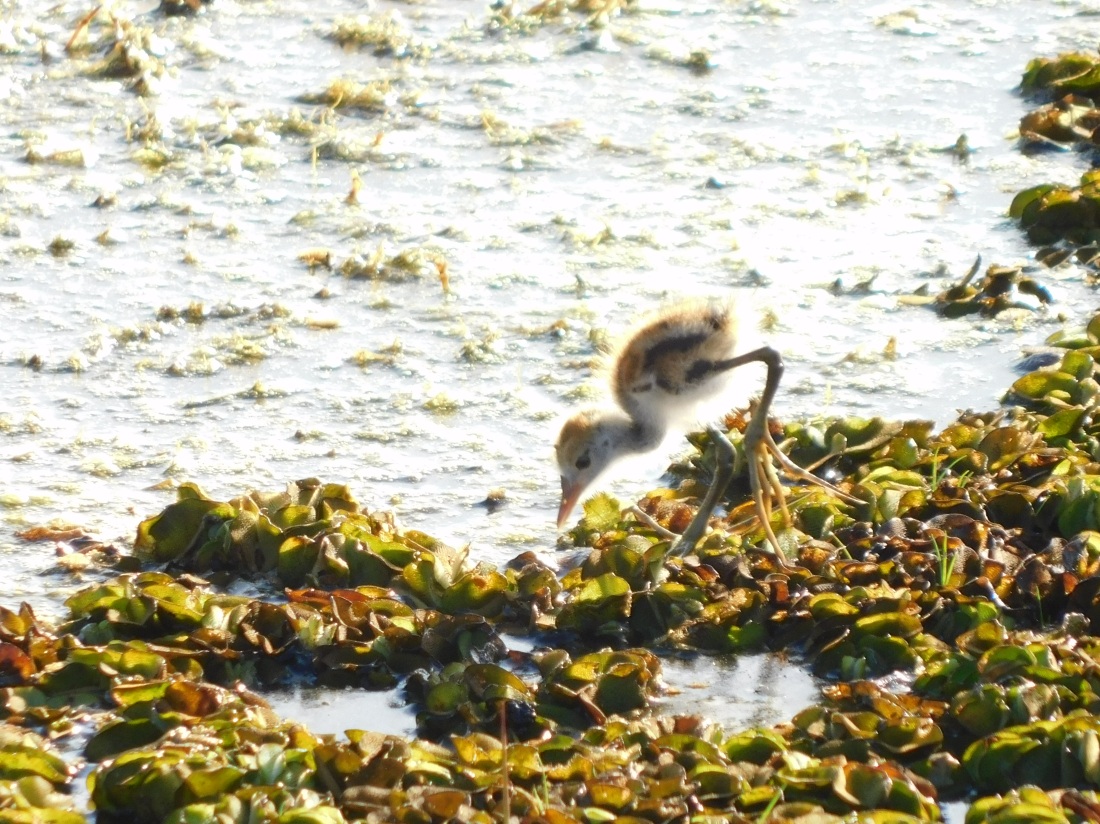 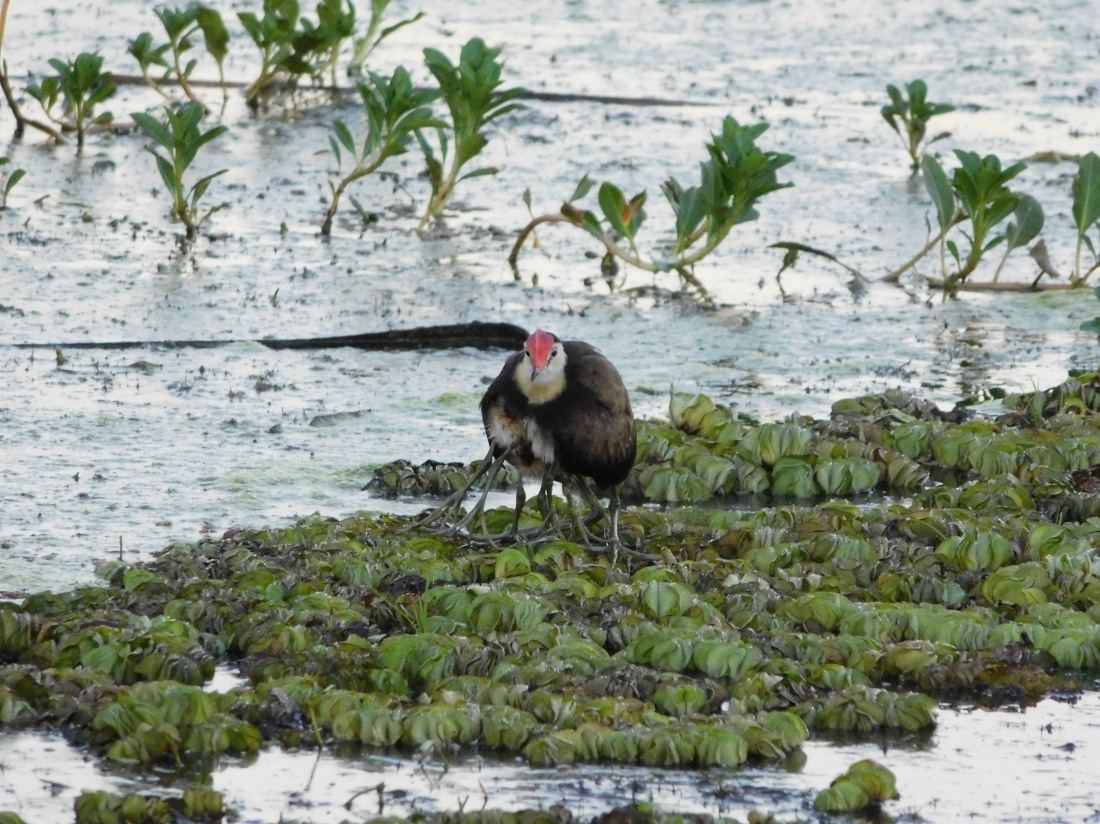 A Black-necked Stork on its nest was good spotting and an amazing size. 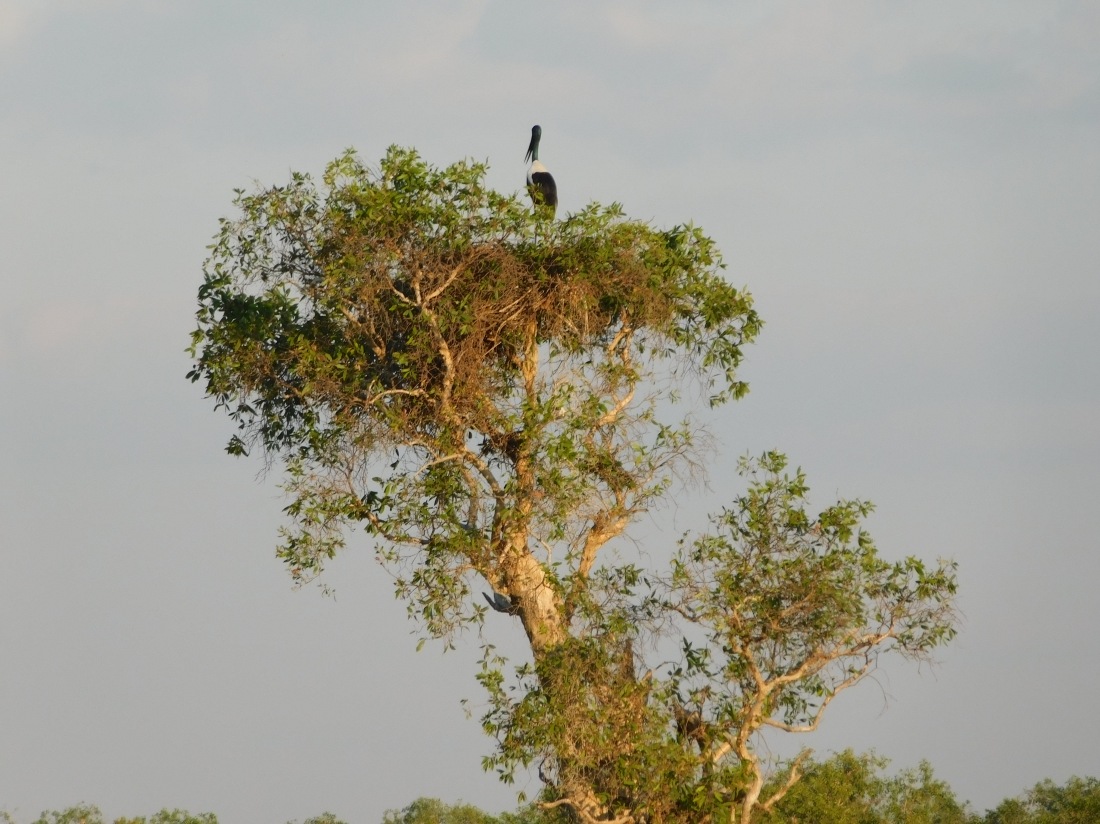 A buffalo emerged from underwater on the sunrise cruise – most people thought it was a big croc at first but he sloshed his way up onto the bank in front of us. There were some big pigs out on the floodplains too. By 9am on the sunrise cruise there were some bellies rumbling and the buffet breakfast was very, very popular. Lachie managed to pull his loose tooth out during the cruise – minimal blood to attract the crocs but it was extra excitement (the bean-counter immediately went online to look up the 2018 award rates for the tooth fairy).

We worked our way through most of the main visitor sites – Mirral Lookout was a steep walk to get to a hilltop that had virtually no view – I think most people were agreed that someone needs to get up there with a chainsaw and open the view back up. It was, however, our first. 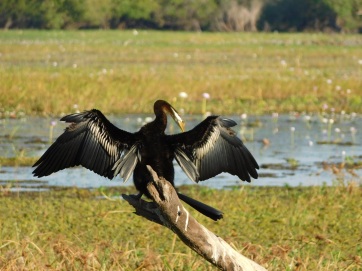 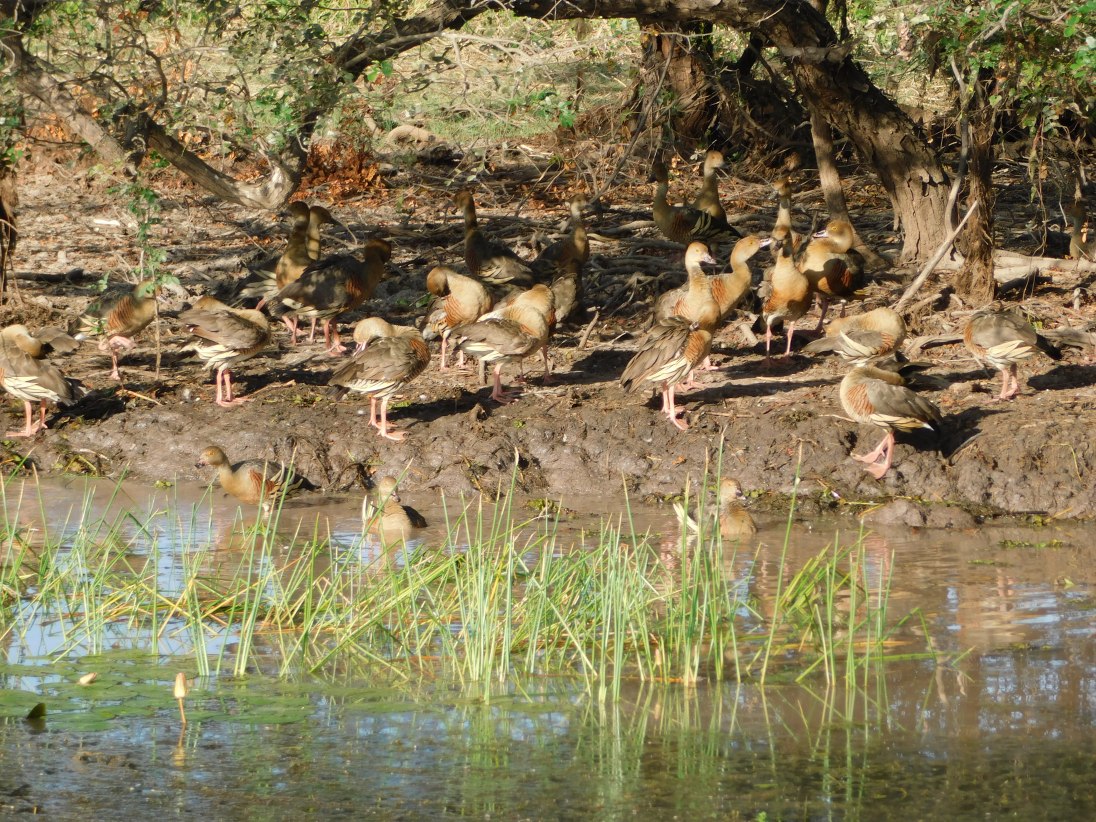 Nourlangie was a good time – walking up the lookout first and then around to the rock art. We drove out to Sandy Billabong which had only just been opened after the wet season – didn’t see too much out there but it was a beautiful, densely vegetated billabong.

Many walking tracks have been damaged and/or fallen into disrepair over several wet seasons and there just doesn’t seem to be the staff to clean them up and get them functioning again. The standard practice seems to be put a closed sign up and leave it – particularly when every available resource (and like always, a dwindling national park workforce) is being thrown towards crocodile management and ensuring the main tourist attractions like Jim Jim Falls are safe for people to visit without the risk of salties killing someone.

The Warradjan Cultural Centre was really worthwhile. There was some good information on the beliefs of the traditional owners and how they have managed the land and respected their spiritual ancestor beings.

Just outside the centre, we watched three generations of a local family around a fire making thin strips from pandanus leaves and preparing different dyes from natural plants to colour the strips for weaving into mats and baskets. We sat and talked to them for a while and found out their favourite places to visit and swim – Maguk (Barramundie Gorge) seemed to keep getting a mention so we noted that down. The Cooinda Resort was pretty open with their resort swimming pool so we let the boys have a swim in the afternoon. 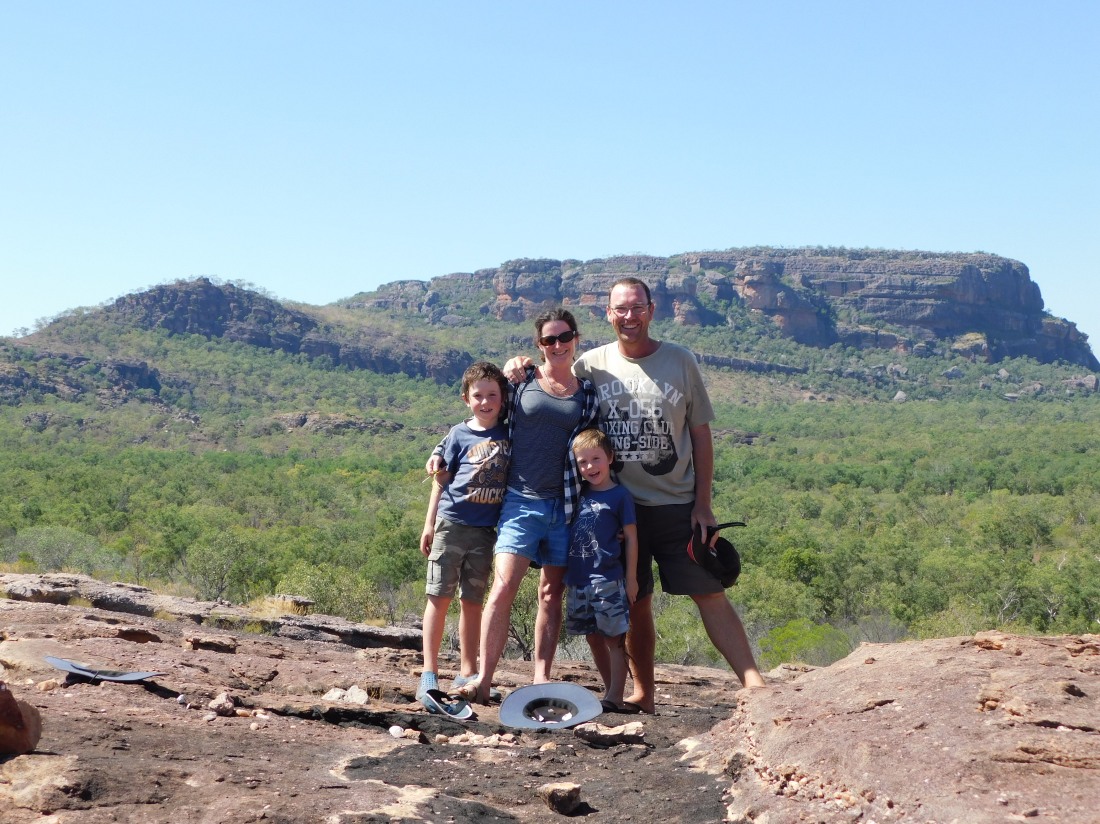 Jim Jim Falls had just opened after the annual post-wet season maintenance and saltwater crocodile survey/removal. We hit the road out there and had a good run passing only a few cars at the very end 4WD section. It was fairly busy out there though being one of the biggest attractions in Kakadu. We walked in along the crystal clear creek – the croc trap still set to catch a rogue saltie.

The falls were still flowing with the enormous height of the drop resulting in the water becoming a misty spray by the time it reached the base. The plunge pool at the bottom is very large, very deep and very, very, very cold. 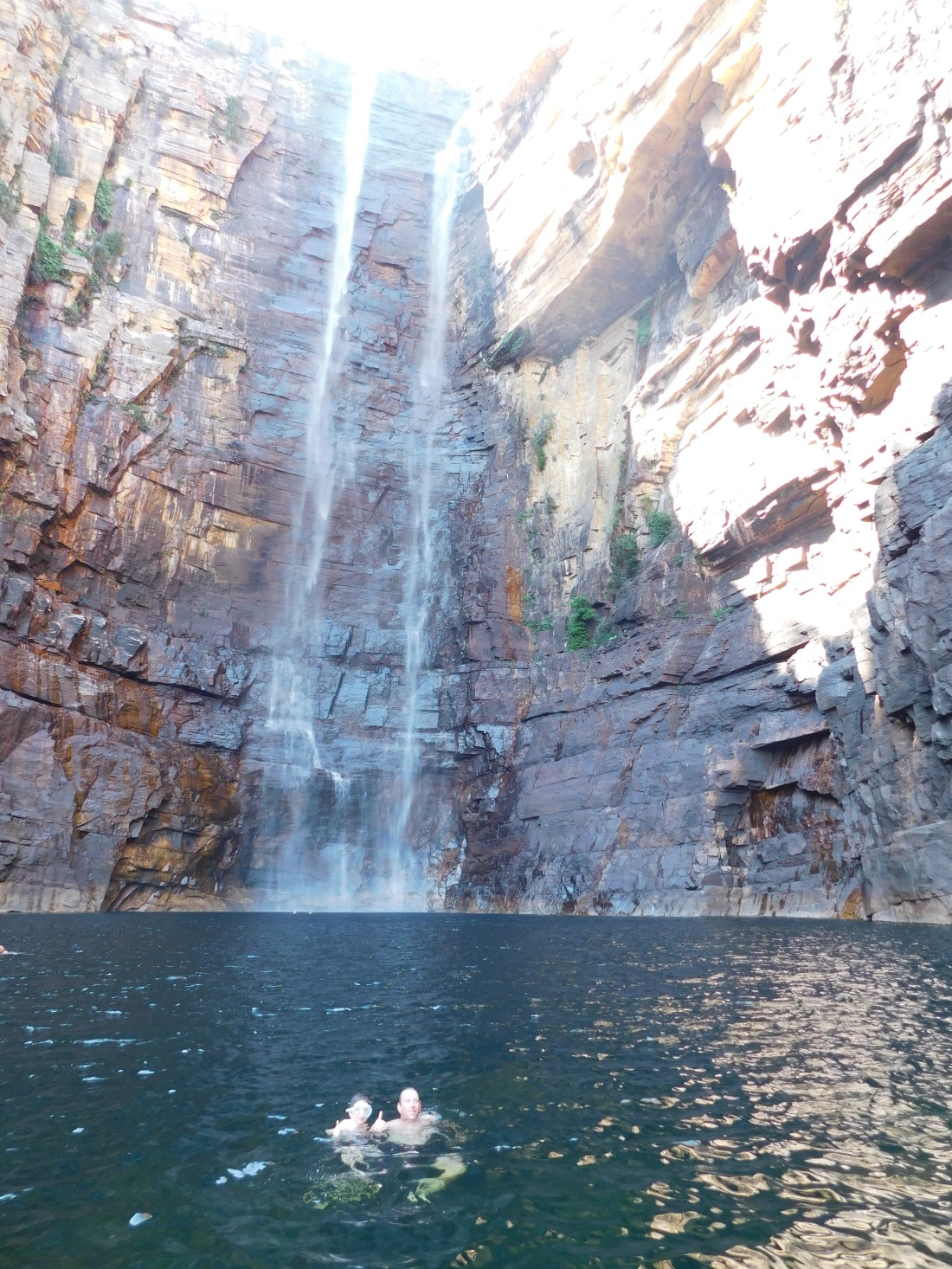 Few people lasted long in there but just downstream was a nice sandy beach which was a nicer place to enjoy. We did a big drive in the afternoon to get around to the highly recommended Maguk.

We set up camp at the nearby campsite and got a fire going. The cane toads were out in force which has become a disappointment in many areas but there are still some nice small frogs hopping around. The next day we walked in to Maguk – the funniest thing (or not) is the short sections of star picket/pool fence barriers that have installed across the creek crossings to prevent a croc lunging from in the dense creek vegetation – doesn’t seem like much but then again it’s better than nothing and wading through the creek with no protection from a potential threat. 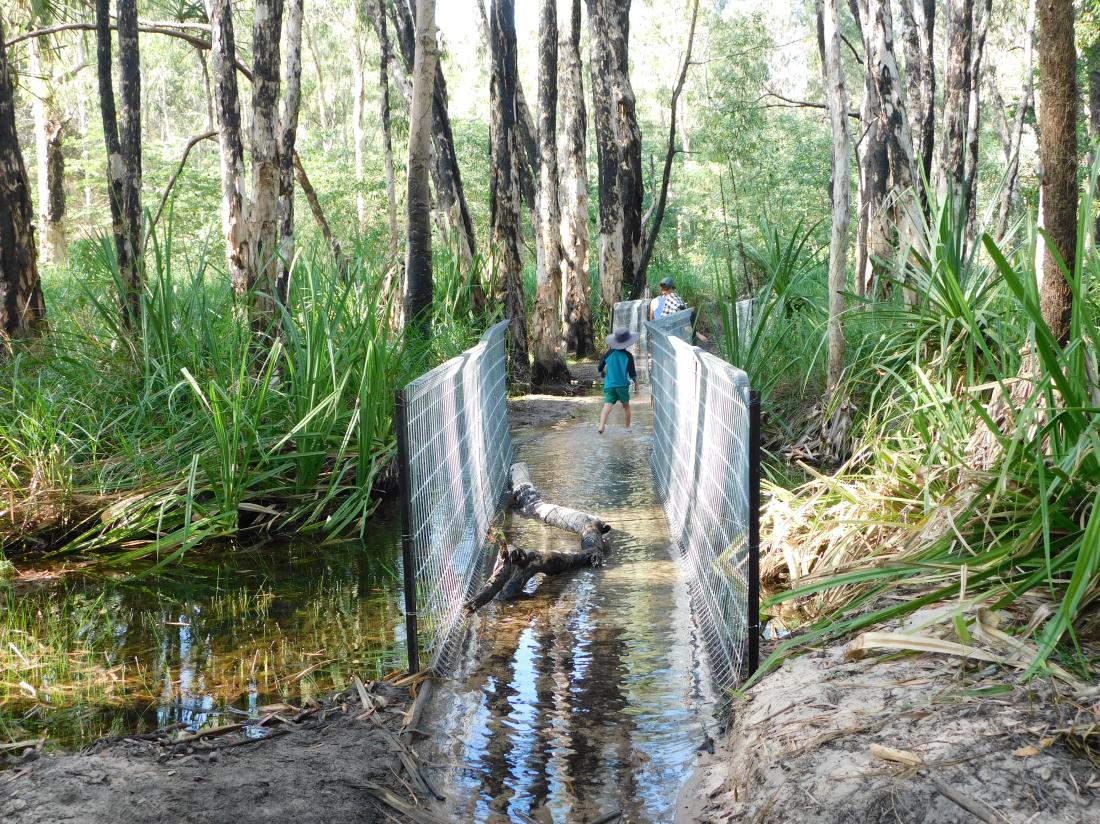 Maguk is awesome – a beautiful waterfall, huge deep pool below, amazing cliffs and clear water that was perfect for snorkelling and watching all the fish. We were there early….first in the water……just after we’d walked past the “Crocs – swim at your own risk” sign.

About 20 minutes later there was enough other “croc bait” swimming around that we felt comfortable. Somewhere we’d read that it was possible to access the swimming holes above the waterfall and we decided – as the crowds continued to grow – to trek our way up there. It wasn’t difficult as it turned out – the rangers had deliberately steered people up to the main pool with the walking trail signs but we found a track and were soon at the top of the falls.

An amazing spot with deep rock pools formed after thousands of years of scouring. The small, narrow gorges were deep water and we swam up and managed to get all four of us through a steep section into probably the most spectacular place you’ll ever be in Kakadu. We swam through a small rock archway and, once beyond, felt like we’d left the international tourist destination behind and had entered the real, true, natural Kakadu. Going to be very hard to beat as a highlight of Kakadu.

We decided to stay another night at the campground here because it was a nice spot – the afternoon peak-hour was slightly busy as people drove through and selected a site – but we had our own area and a good fireplace. 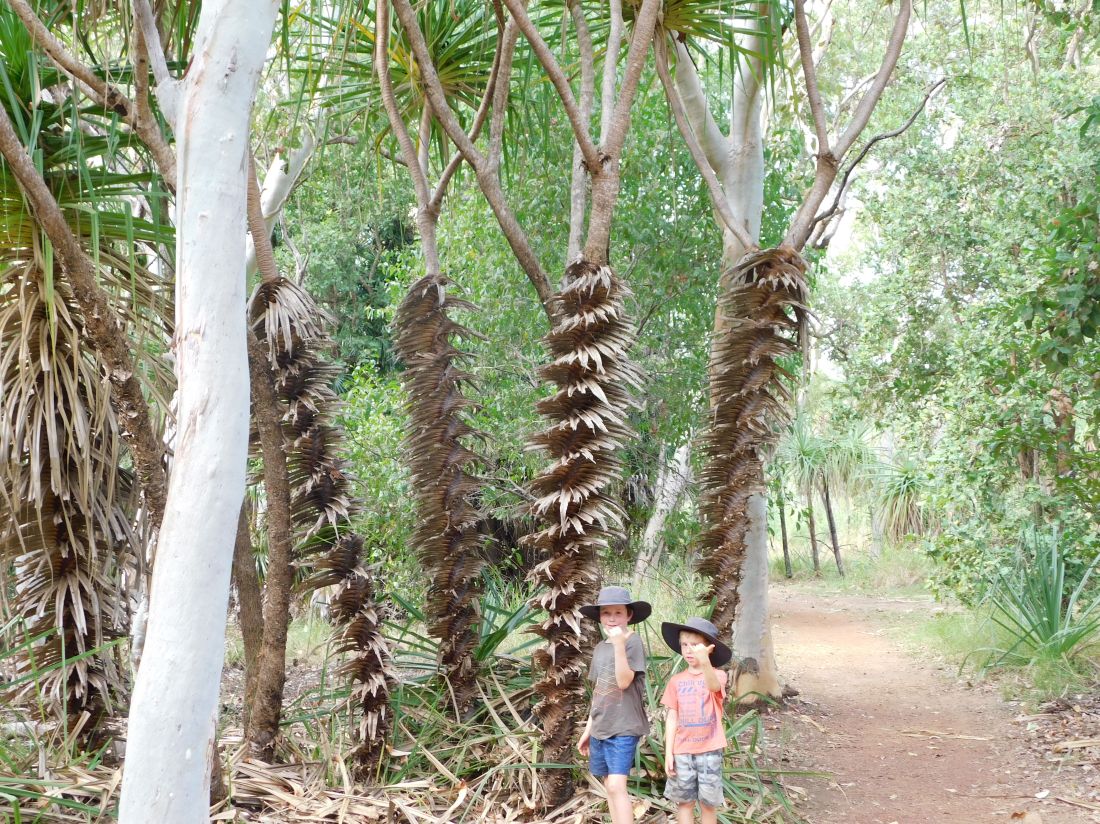 The next day we were on the road – not a long drive out but…geez…if you need to know what Northern Territory corrugations are….drive on this road! We just took it slow – there’s a rule with driving on corrugations – something along the lines of “you can do them at 9km/h or 90km/h”. It’s pretty hard to get up to 90k without every nut and bolt rattling loose – one couple we were camped next to said they pulled up and as they unfolded their camper trailer steps they fell apart! 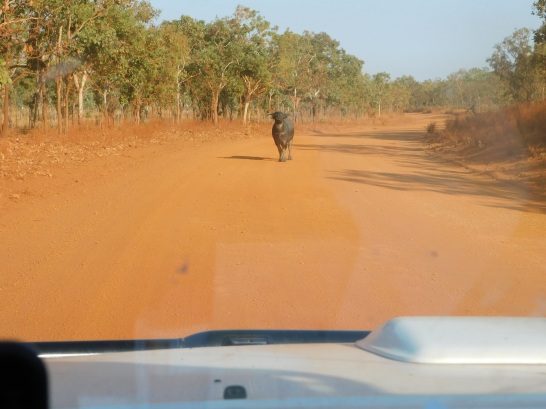 We headed west (ish) towards Mary River Roadhouse for some fuel and mobile reception. We had enough mobile reception to have a short school lesson with Miss Swan. Checking emails we also got some good news that we’d received a permit we’d applied for to enter Arnhem Land and were allowed to drive the 300kms from Jabiru up the Cobourg Peninsular to Garig Gunak Barlu National Park which is (google it for exactamoondos) maybe 100kms as the crow flies north of Darwin – in line with the Tiwi Islands – maybe a bit north even – 300+kms by road. Anyway, for now we were headed for Gunlom Falls (everyone talk about Gunlom Falls to distract Amy from the silly youtube videos we’d watched of cars being washed off Cahills Crossing which we’d have to cross to get to Arnhem Land…).

We set up camp at Kambolgie and then headed towards Gunlom. A short but very steep walk up and we were at the top of the falls – the infinity pool is awesome – a younger Amy remembered frolicking with a dashing young fella only ten years prior in the swimming hole. The boys were – as always when water and swimming is involved – in their element – different pools to slide and splash between. We met another travelling family (two boys almost the same age as our rascals) enrolled in our same Port Macquarie distance education school and – travelling in opposite directions – we exchanged some travelling tips.

With our permit for Cobourg Peninsular approved, we had some direction to our lack of itinerary. We headed towards Jabiru and camped at a nearby campground which had a nice billabong and some starving mozzies which got us in the tent early. Bowali Visitor Centre was worth a visit – we had to pick up our Cobourg permit from the office anyway but we ended up there for a while watching documentaries about Kakadu. 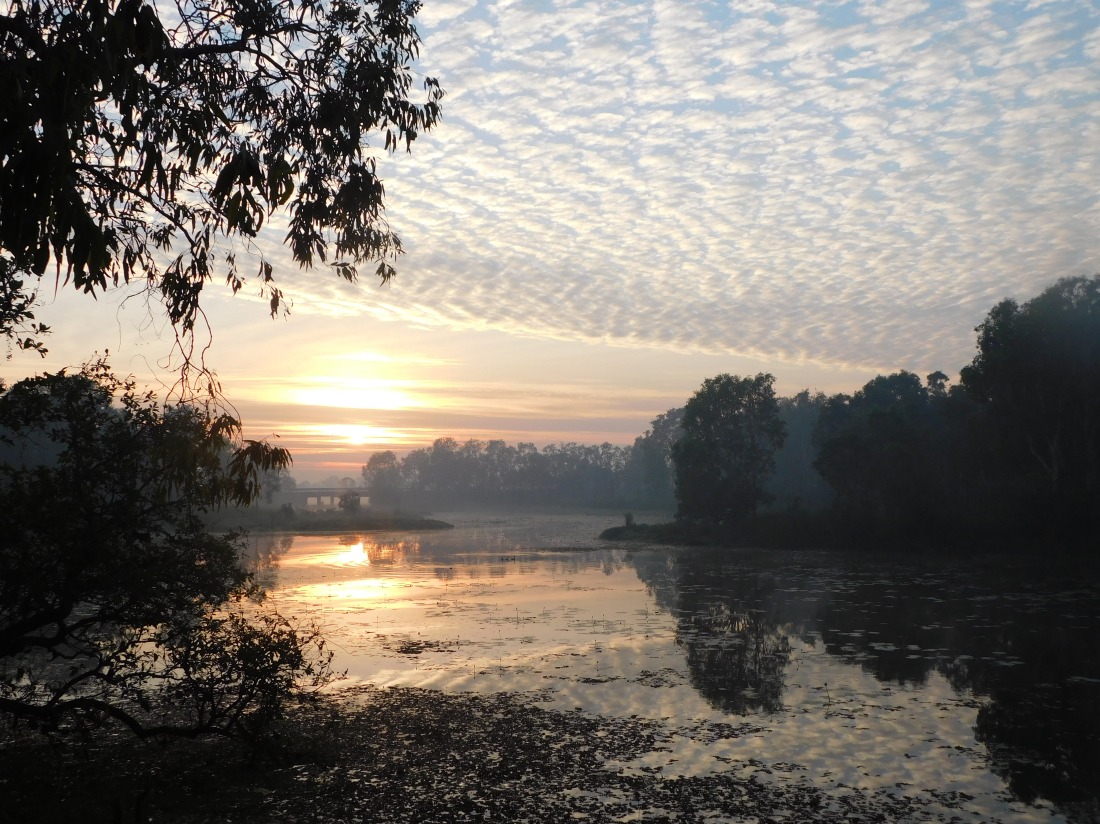 The day before we were due to cross Cahill’s we went out to the viewing area which is very popular with people spotting the crocodiles, watching people fishing for barra and – of course – watching the vehicles crossing. The tide was full in the afternoon and the water was a torrent as it flowed in but as the tide reached its peak the water went calm for about 10 minutes before the flow started back out again downstream.

During this lull quite a few cars and trucks that had lined up waiting pushed through – even though it was deep water, the danger of the strong current wasn’t a factor and they made it through without any drama. 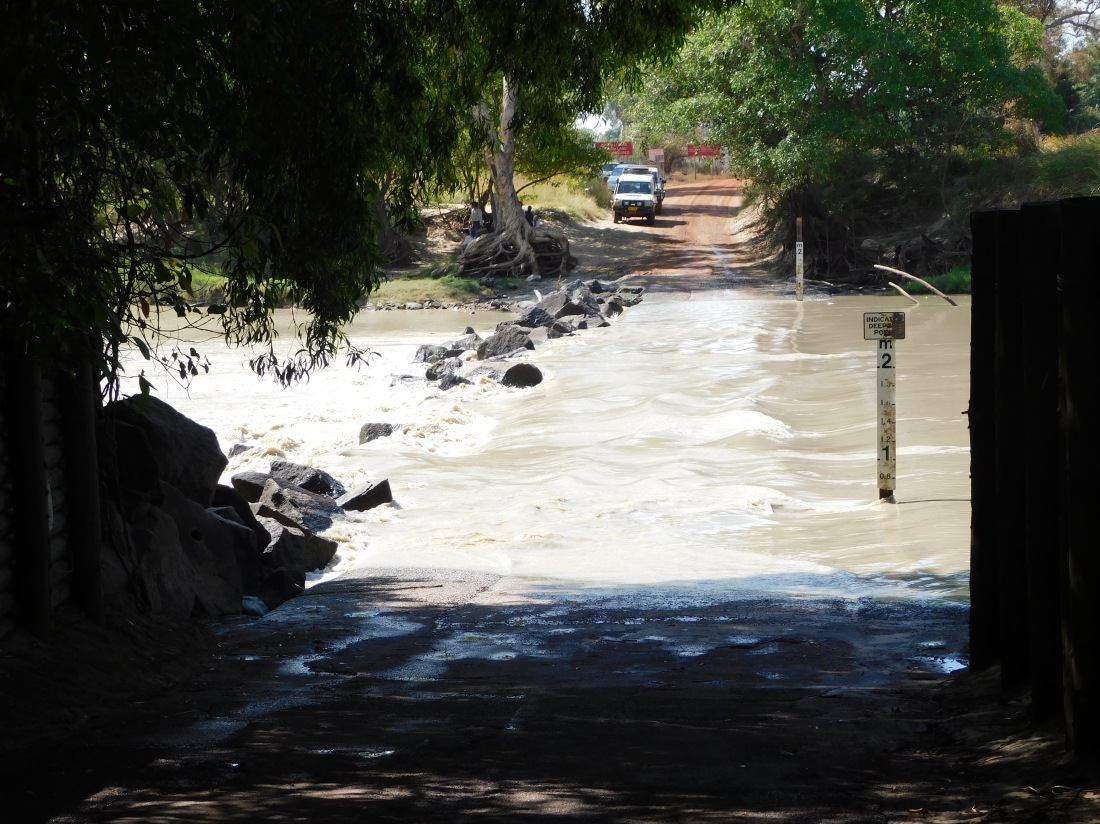 We set up camp at Merl campground so we could easily access Ubirr for the rock art, the amazing sunset view across the floodplains and also so we were close to Cahill’s Crossing so we could make it through at a low tide- 7am. The rock art was great – the actual rock shelters and shady walk through the outcrops makes it something special. 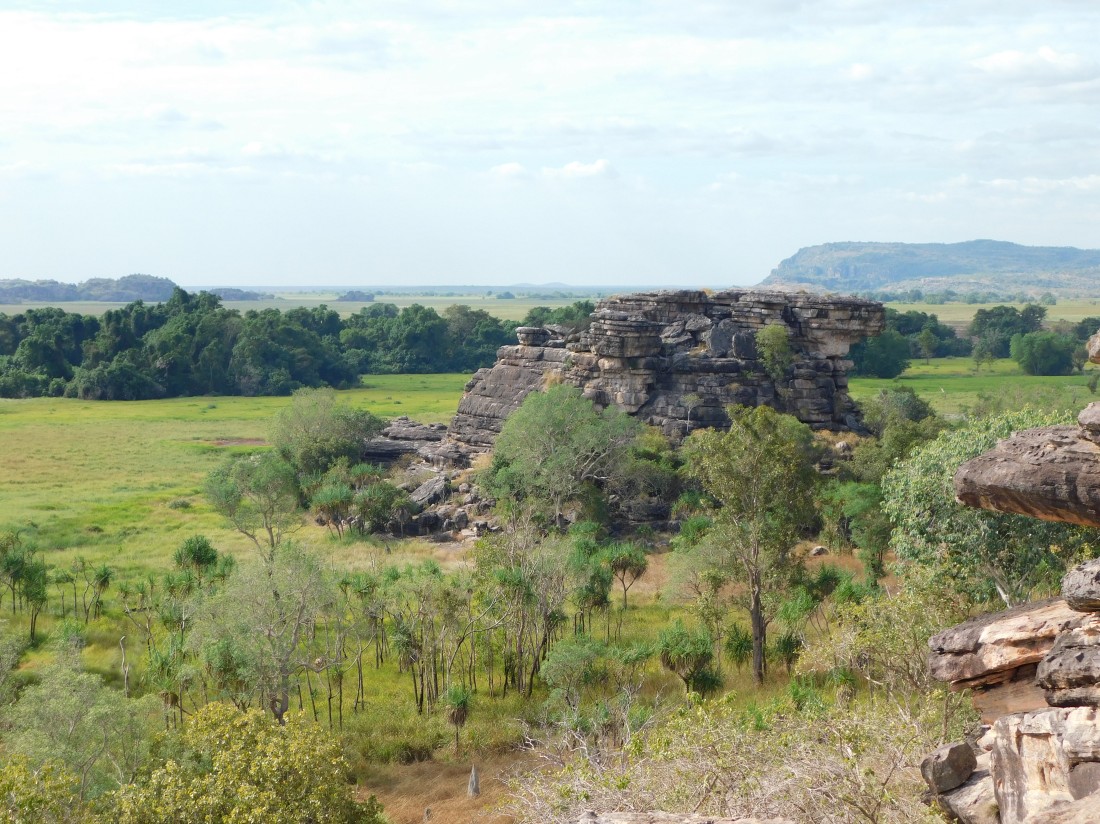 The sunset from up the top of Ubirr is easily one of the highlights of Kakadu – the sky put on a spectacular display for us and we headed back to camp for a an early night. 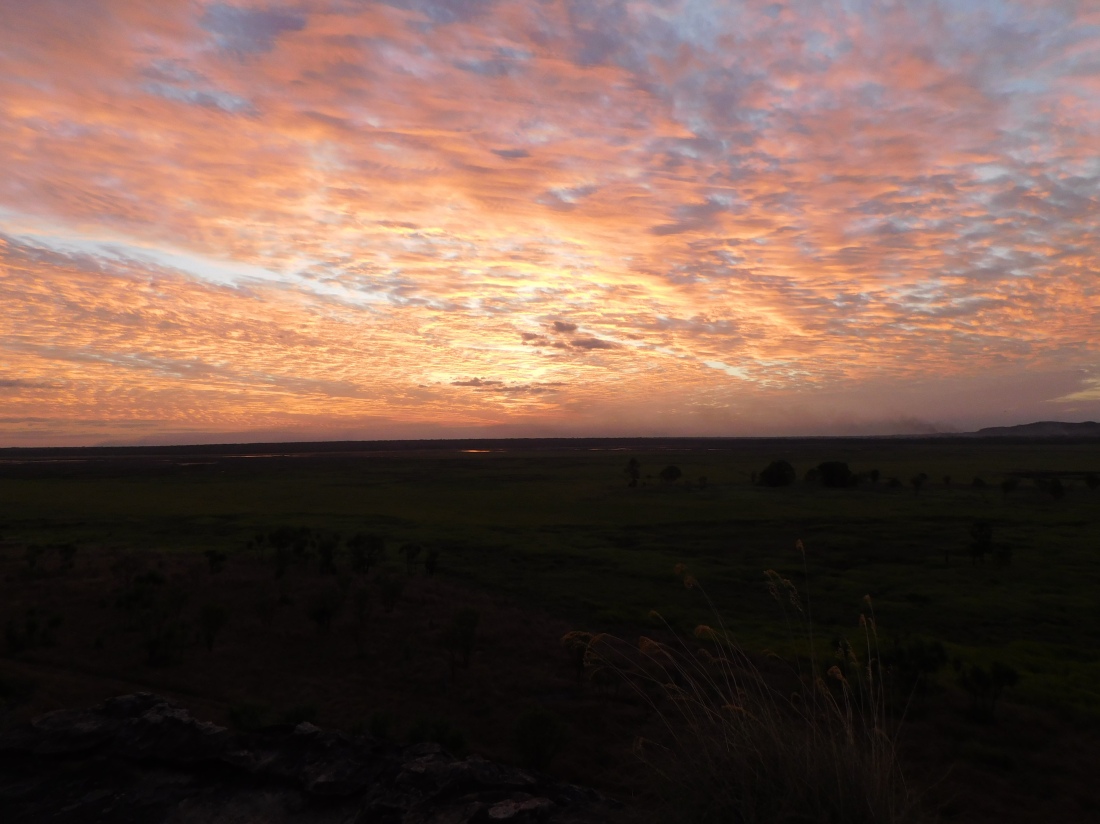