From Kings Canyon we got down to the Lasseter Highway and headed west towards Uluru. Mt Connor is an impressive sight as you drive along the highway and we got excited at first because we were waiting for Uluru to come into view – Mt Connor is a very large mountain amongst a very flat plain – but it wasn’t “the” rock. 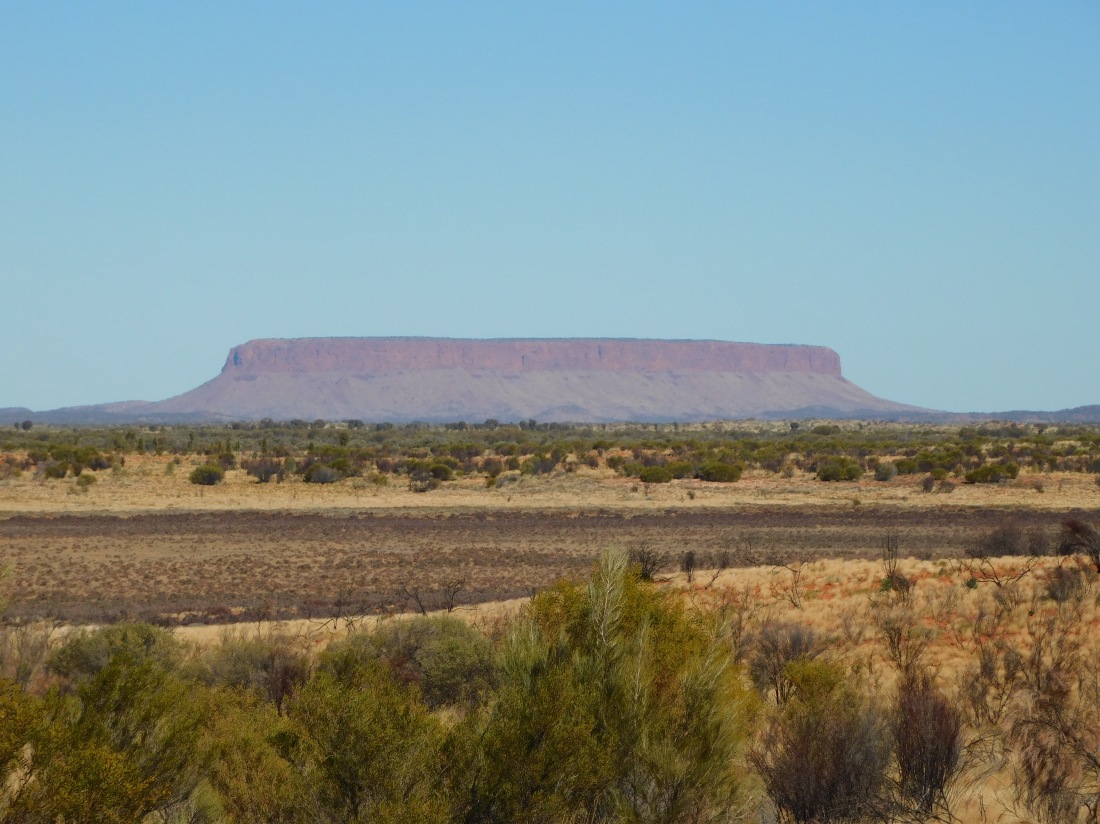 Getting closer to the town of Yulara, the view of Uluru becomes incredibly huge and we saw some good dirt tracks heading off into the scrub. Another unofficial free camping area about 5kms outside town was chocker-block – largely because the Ayres Rock Resort campground was also full with school holiday campers. We decided to head a bit further back and found the best Uluru campsite there is about 10kms out of town. On a sand dune with uninterrupted views to Uluru and at the same time a view out to Kata Tjuta from the same spot. 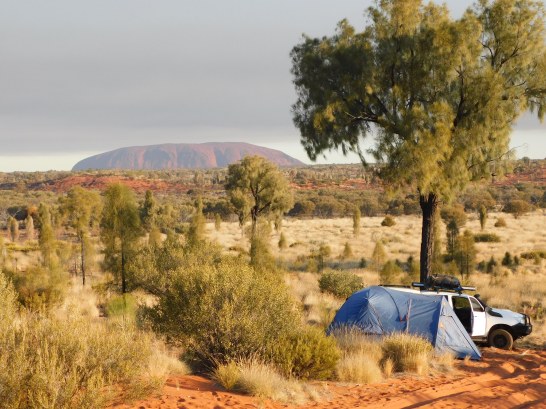 We headed out to Uluru and got stuck in a line of cars waiting at the boom gates that control the entry to the National Park. After ten minutes of not moving, we realised that with mobile coverage available, it would be quicker to buy the entry pass online and go through the self-serve boom gate that just required a barcode off our phone. That worked and we soon were able to get out of the single queue when it opened into two lanes and zip through the entry. We stopped in at the Cultural Centre which was okay – a bit dated but some interesting dreaming stories centred around Uluru which explains to some extent why it’s such a culturally significant area. There was good stuff for the kids – hands-on stuff like seeds, bush foods, weapons (yeah!!) and other traditional tools and materials. We headed off on the walk from the cultural centre across to the rock and then around the base – which ended up being 14 or 15kms. 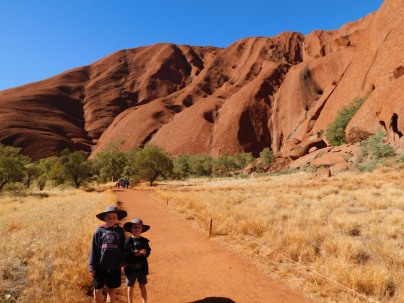 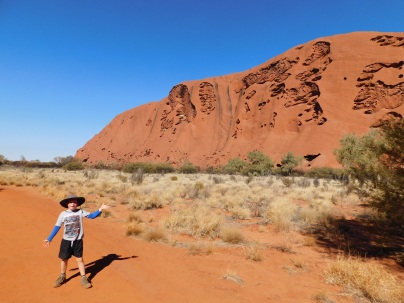 The walk was great – especially when we were up close to the rock. The rounded cavities, black algae stains indicating the waterfalls and the mostly dry waterholes at the base were great. The segways were annoying with a loud whining noise as a dozen went past in a cloud of dust – some people looking completely out of control and definitely not taking in any of the view (making it a bit pointless for them to be here). 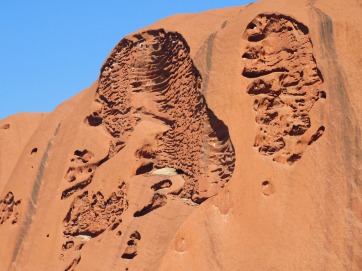 Similarly, the bike hire too just creates extra traffic on what probably should just be a walking track…for walkers…as it was always intended. There is a road that loops around the whole rock so bikes and segways could easily enough use that instead of the walking track. The Traditional Owners are so concerned about people hurting themselves climbing the rock yet there’s segways, bikes, convoys of helicopters on joyflights, skydiving planes constantly dropping parachutists over the top and, wait for it, just when you couldn’t do anything else to ruin the place….a blimp – helium air balloon / airship thingy – is currently being readied for lift off. It’s big, white and ugly – but don’t worry….some tacky dot painting on it is sure to make it blend in to the sky and be culturally sensitive….NOT. 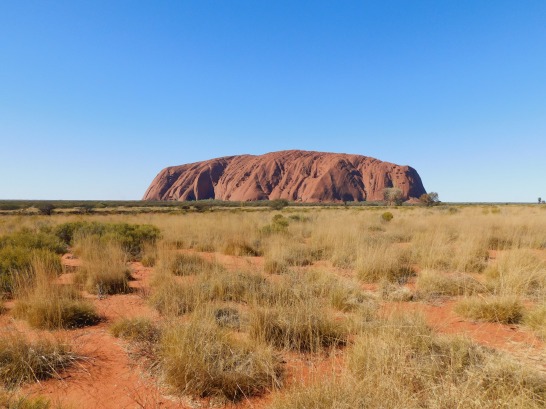 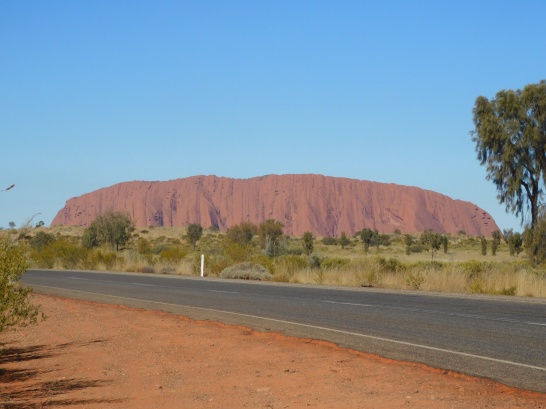 We got some basic shopping in Yulara to keep us going – it was a bit multicultural actually – Amy found some Kim Chi which was quickly in the shopping basket but when Josh and the boys found frozen kangaroo tails (big red roo tails too – the size of baseball bats!) they weren’t allowed to get one!! We got some very expensive fuel – $2.05/litre! but also filled up with good tasting water from the servo too – it makes sense when you look at a map and see how remote Yulara is on the continent so we didn’t complain too much.

Next day was Kata Tjuta and we walked in the 2.6km Walpa Gorge track first – spectacular amphitheatre with pretty cool echoes for the boys to work with. Doing a single loud clap and letting that bounce back – not just off the cliffs but out of the small caves too which slightly change the sound. 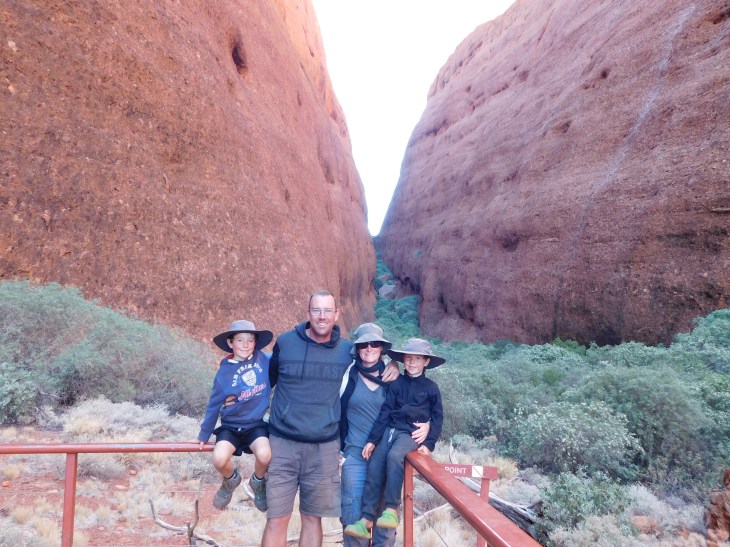 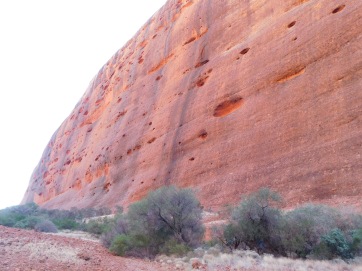 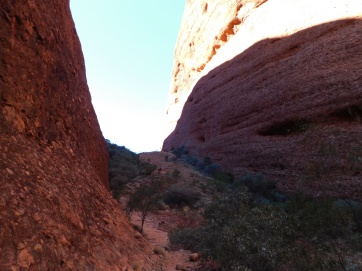 Next walk was the longer Valley of the Winds track. By the time we got there the car park was almost full and the first section of track to the first lookout was busy with people walking in and out. 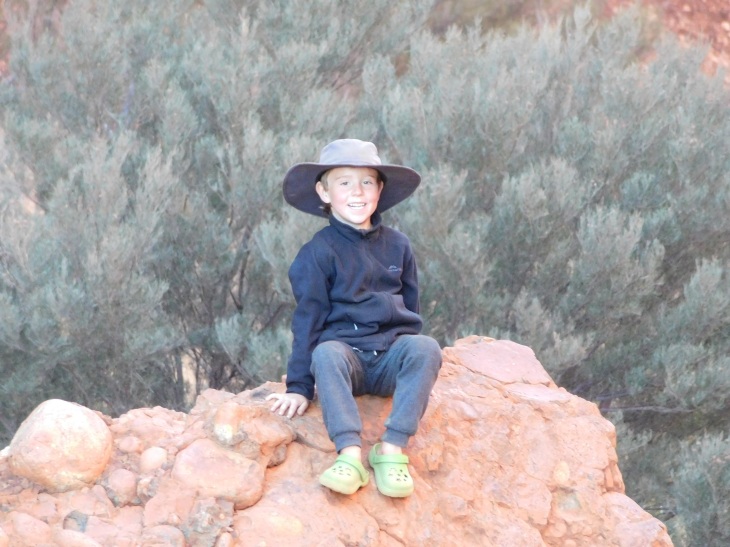 After that first Karu lookout, though, the numbers of people dropped off and the rest of the 7km was much quieter and much more enjoyable – the sign at that fist lookout is a bit misleading in that it says the track is closed from that point on after 11am (due to heat) but it’s actually closed from 11am ‘when the temperature is forecast to be over 36 degrees’. It’s also graded as ‘difficult’ which deters people but there’s only a few sections that are steep and rocky and Cammy pranced his way (in crocs of course) along the whole walk – leaping from rock to rock.

The walk is just incredible and the fact that you can wind your way through the whole Kata Tjuta landscape along a single track is awesome. The views from every angle are breathtaking with the narrow view from Karingana lookout being the bees-knees of lookouts. 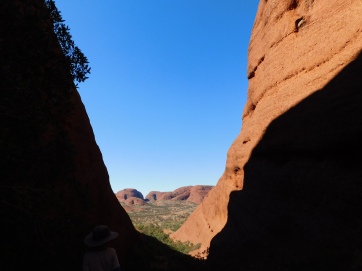 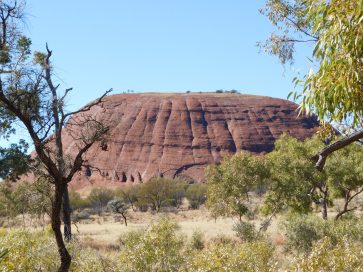 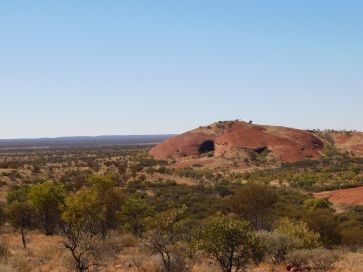 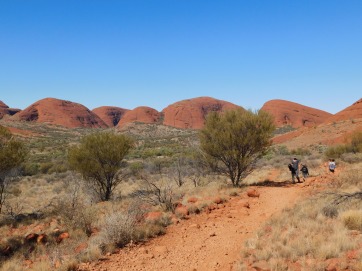 Back to our camp and we spent several days revelling in the sunrises (at minus temperatures…really really freezing!) and sunsets lighting up both Uluru and Kata Tjuta. Plenty of firewood meant we could cook on the fire plus have a good fire at night to keep warm while watching the stars (incredible…hard to describe…). 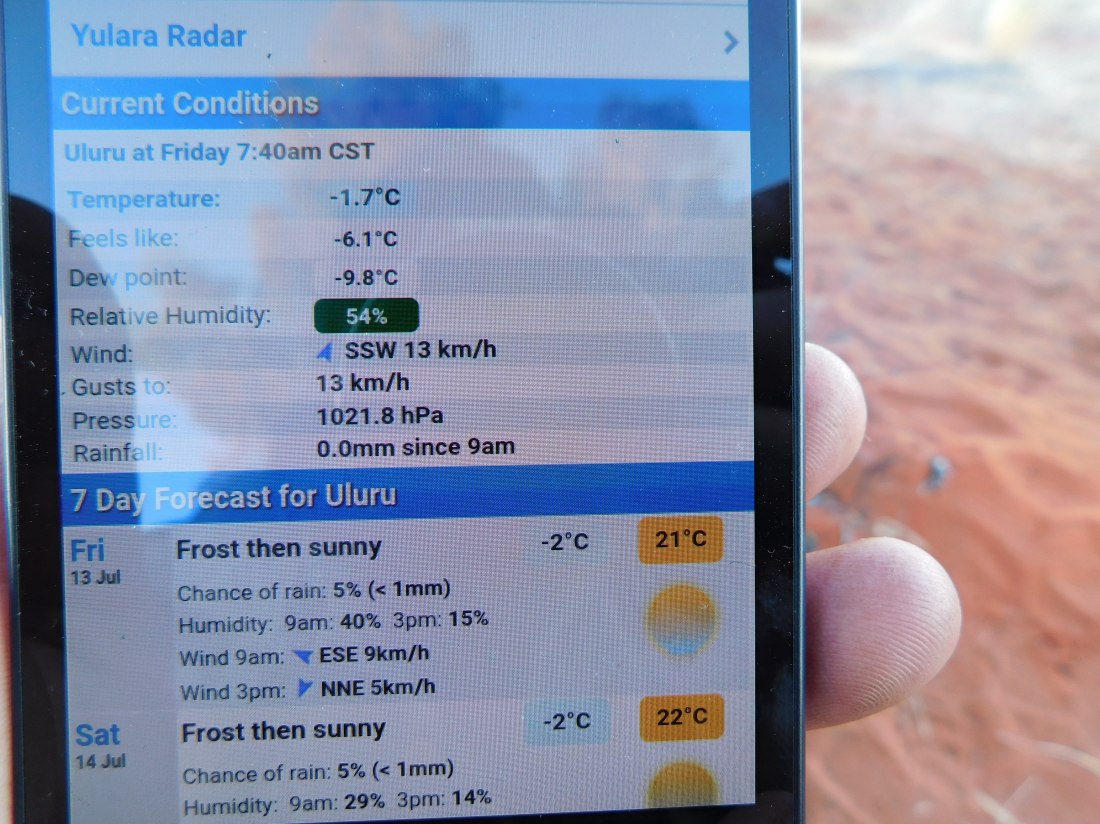 The Spinifex Hopping Mice came out every night and hopped around our camp and all over the sand dune leaving cool little footprints. The resident dingo was never too far away and was confident enough to strut past in the distance letting us know he was around but only allowing a glimpse mostly through the bushes. 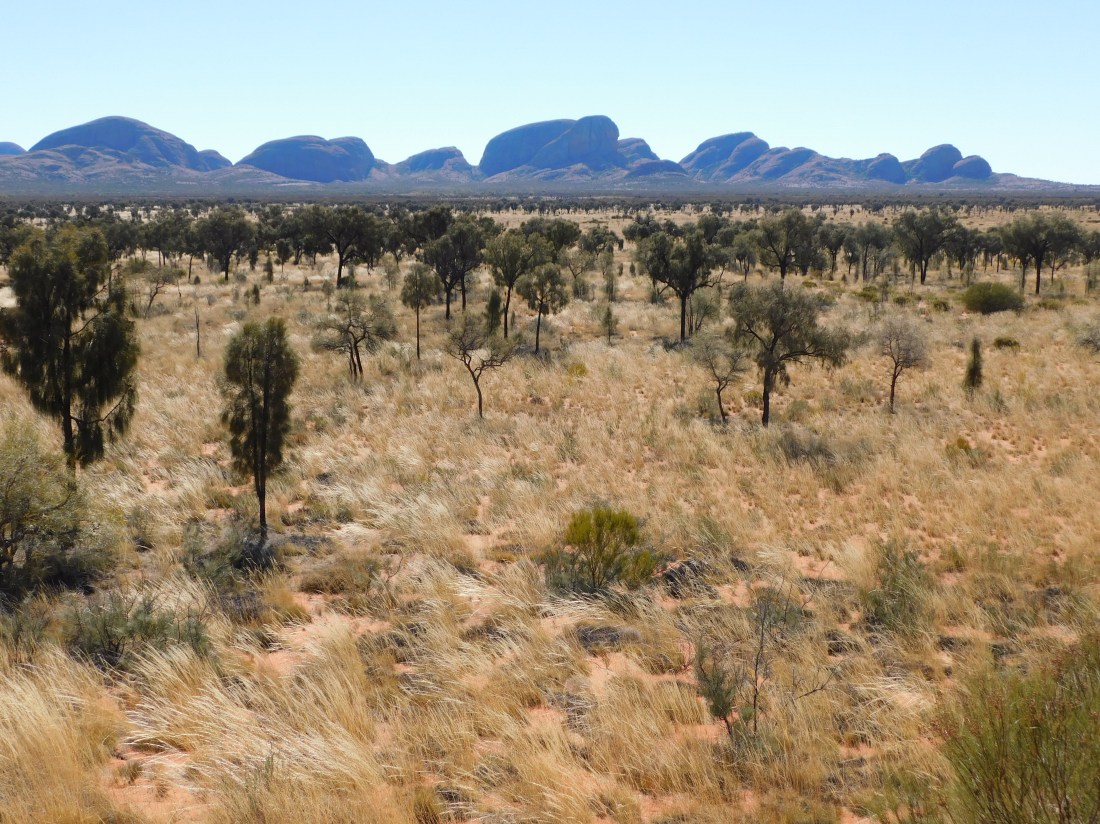 We couldn’t get enough of the place and spent one of the days as a rest day doing nothing but looking around for wildlife prints, catching up on school work and relaxing.