Next morning we packed up camp and eventually got around to looking at the small matter of Amy bogging the Hilux in the deep sand. The boys, of course, thought it was the most exciting thing ever – especially when the Tred ‘bog-boards’ were called into action. Recovery was quick and painless – Treds were dug in under the back wheels, tyre pressure was dropped, low-range gears and a fast reverse back to the safety of the river pebbles. 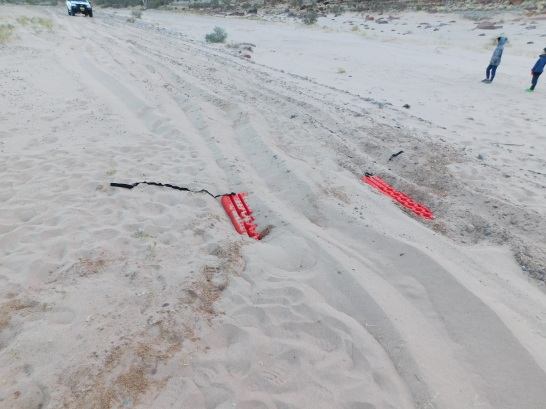 We headed back onto the bitumen and headed west towards the Mereenie Loop Road which, with a permit from the Aboriginal land owners, means travellers can cut through to Kings Canyon in 160kms without having to drive back through Alice Springs which would involve something like 500 or 600kms! On the way we passed Tylers Pass Lookout – the boys couldn’t go past without getting a photo of the sign and the pretty speccy view for favourite cousin Tyler! 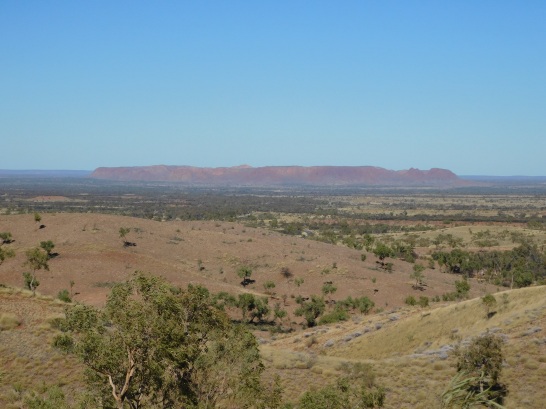 The view was dominated by Gosse Bluff – or Tnorala to the Traditional Owners – and a while later we drove into what is a huge comet crater – the 4WD road actually cuts through a gap in the crater walls and you park in where the comet hit the planet. A short walk took us on a loop walk with information about the Aboriginal connections to the place. Interestingly enough the site is a ‘sorry’ place for them because of a massacre that occurred but it was another Aboriginal tribe that snuck in and killed the people.

The Mereenie Loop Road was pretty bad and we could only stare at some of the nice caravans that were being bashed along the corrugated road – hopefully they’d left the fine china and crystal champagne flutes at home for this trip! The shredded tyres the length of the 160kms was testament to the harsh road. We got through by taking it easy – even pulling over and letting one following car past so we didn’t have to see their headlights peeking through the thick dust.

Close to Kings Canyon – maybe 25kms before there – is Morris Lookout which allows free bush camping with no facilities. As you can imagine it’s pretty dirty with easily twenty cars, campers, caravans and the rest setting up there each night. We stopped and had a look but quickly decided we could find somewhere better. From the lookout, the road winds down steeply to below the escarpment and we almost missed the dirt road off to the side which was to lead to a great campsite.

Basically a quarry/gravel dump for the road workers, there was nice cleared spaces and various fireplaces showing we weren’t the only travellers to stop here. We not only found a good spot but with the wind coming and going (and sometimes blowing strong) we managed to use a narrow loading area of the quarry as a wind break for the tent. 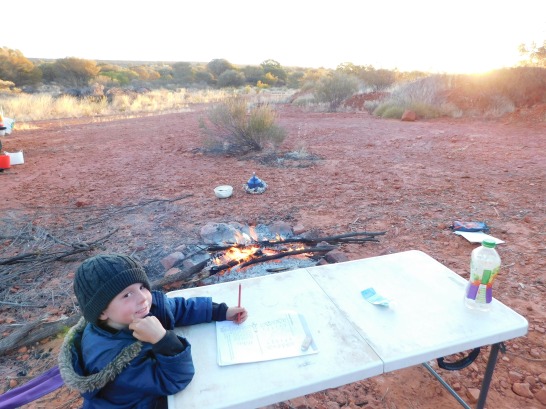 We headed into Kings Canyon passing through the resort before getting out to the National Park. We did the short walk up the floor of the gorge to get a feel for the place and planned our walks for tomorrow. 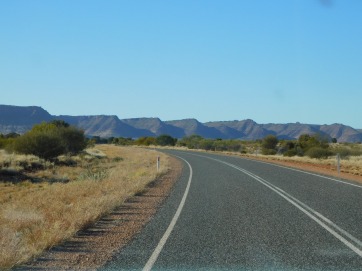 The next day we got going early back out to Kings Canyon and made a start on the Rim Walk which gets the heart started and the body temperature up very quickly by climbing straight up the escarpment. 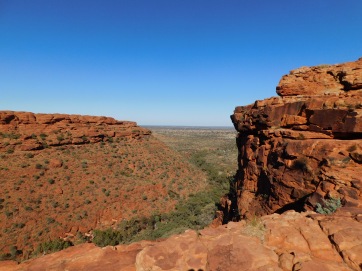 The views instantly become incredible and the walk has to go down as one of the highlights of Central Aus so far for us. The walk was busy with a constant stream of people winding their way around the ridgeline and doing the short sidewalks into the Garden of Eden and lookouts. 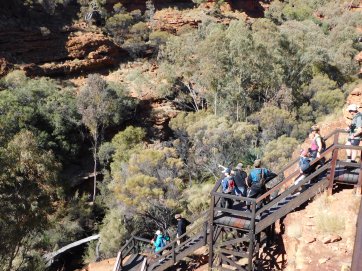 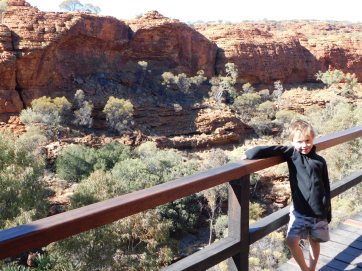 Apart from the initial climb, the rest of the 6km walk was pretty easy – just the cliff edges are incredibly dangerous and the multiple helipads up there suggest they might do a few rescues of injured people. 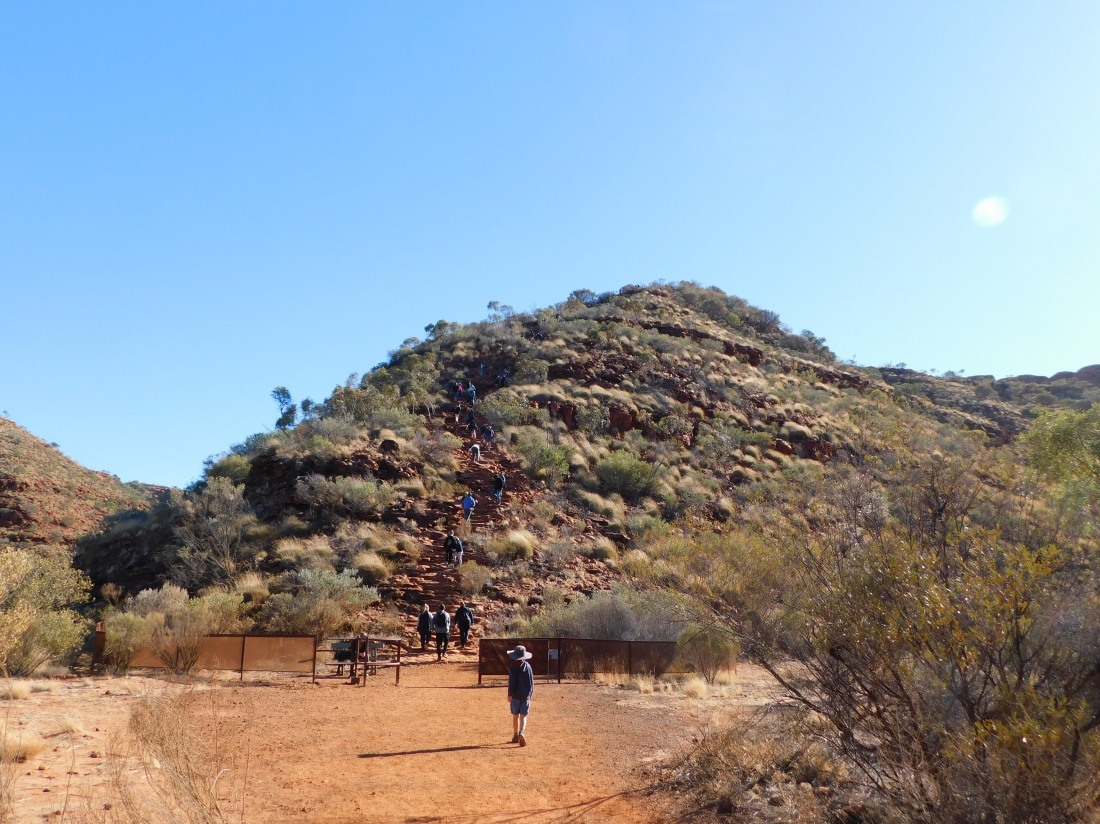 We made use of the resort campground for showers and internet/phone access but stayed out at our escarpment camp for two nights. Only one other couple stayed in the area but probably a kilometre away from us in their swags. The nights were cold and we had ice on the windscreen each morning which was fun to scrape off. 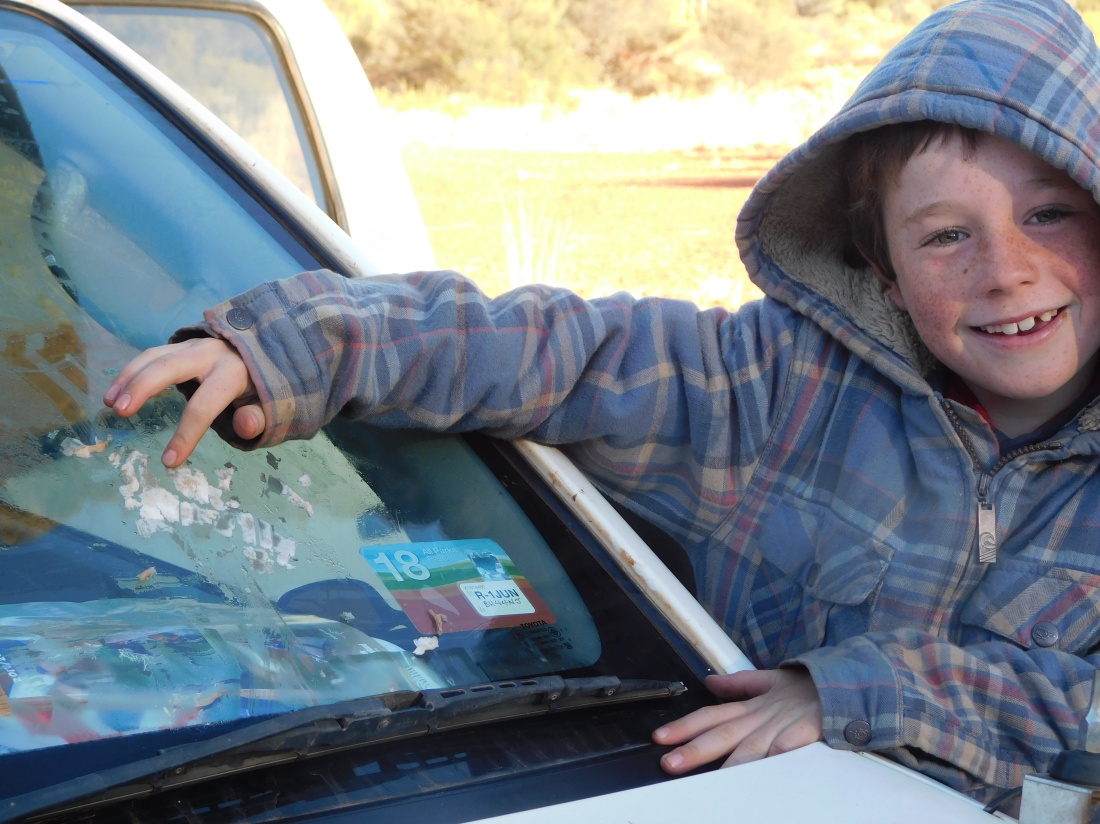