Heading off from Trephina, it was great we could fill all our water storage up to full. We did the short drive into the John Hayes Rockhole which still holds water in a few small pools and walked up to the lookout. 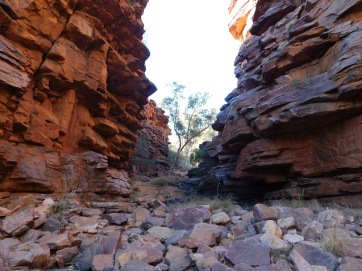 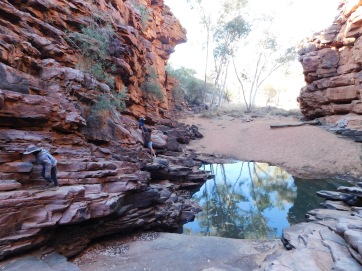 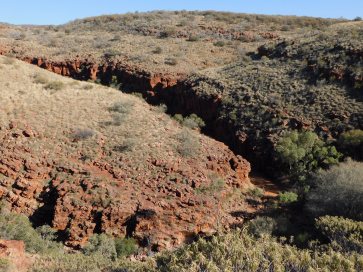 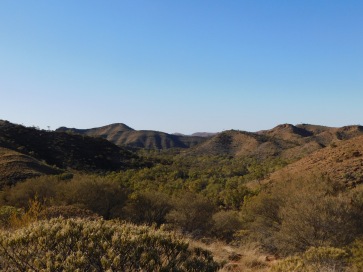 Next stop N’dhala Gorge which has thousands of peteroglyphs – the rock engravings that aboriginals created from chiselling and pounding and scraping the rock – mainly in good seasons when food and water was plentiful and they could express some creativity and record stories.

Then we really hit the road for a big drive out to one of the more remote areas we would be visiting – Ruby Gap. The track out was quiet giving a sense that we were off the beaten track and no one was out here. The last part of the track in along the riverbed was pretty easy going despite the warnings about the need for high clearance and recovery gear for sand bogging.

Once we arrived we found an art group tour with maybe eight people using the spectacular scenery as their painting theme and four other cars spaced out for kilometres along the river so everyone could have their own private, peaceful spot. 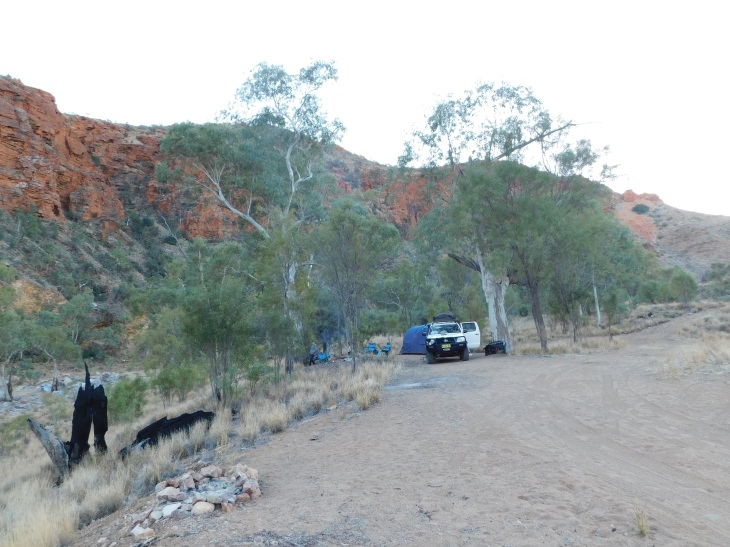 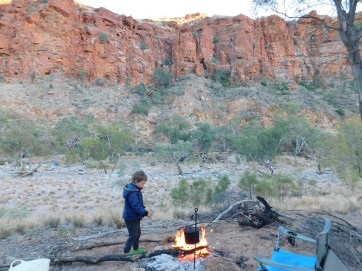 Ruby Gap was named after an explorer found rubies and set off a ‘ruby-rush’ with several hundred miners arriving seeking their fortune. A year later the European market that was buying all the rubies hit a glut and some questions were raised…..they weren’t rubies at all but garnets – high-quality but almost worthless. Luckily the gold rush had just started nearby at Arltunga so the ‘ruby’ miners found the next boom to chase.

The river sand is full of the small garnets and it’s an addictive activity – first finding a patch of red sand and then fossicking through hoping to find a big ‘un.  We spent a day walking up the river – fossicking as we went – and reached Glen Annie Gorge which holds crystal clear water – attractive but too cold for us for swimming. 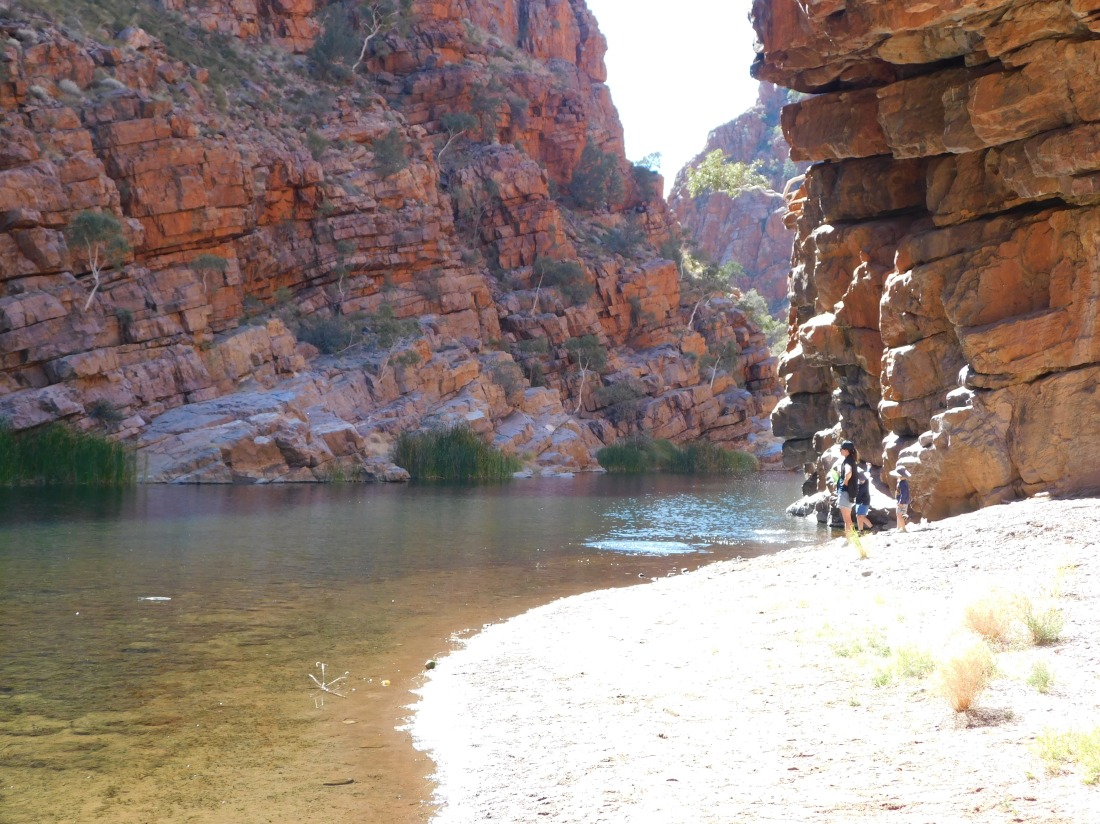 That long stretch of water blocked the gorge and stopped us from getting up further to Fox’s Grave which is a gravestone of a miner – carefully inscribed by his fellow miners with their mining picks – another reminder of the isolation and disconnection from the world these miners faced. We collected lots of garnet and stumbled across a bearded dragon that scared the life out of Amy! Cool creatures – so confident, it seemed to think it could scare us off with its head movements and hissing open mouth – that just made us want to crowd around and take more photos! 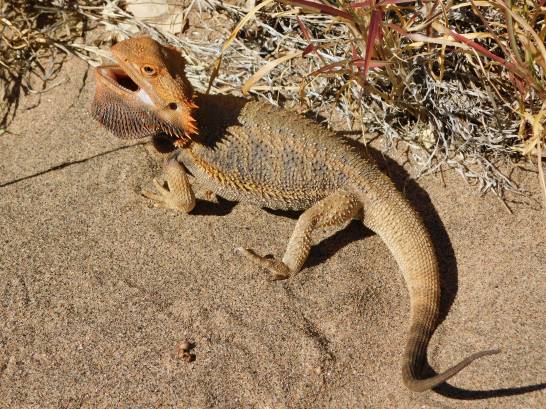 We passed two 4WDs who decided walking wasn’t their thing and were bashing their cars along the river bed across large, virtually impassable rock outcrops – extreme 4WDing that left a trail of chipped rock and black tyre marks – it would be terrible to look under your car to see what damage had been inflicted! We settled in for a few days with a great campsite looking out at the steep red cliffs. 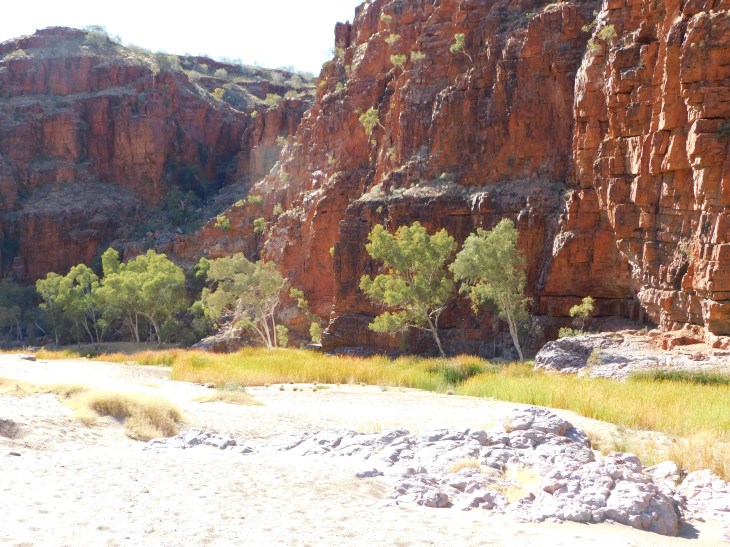 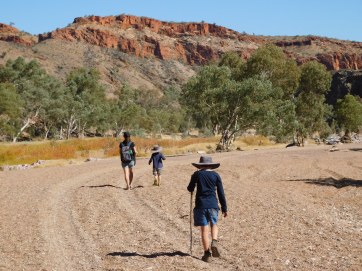 Good firewood from the stockpiles of flood debris. We enjoyed the fact that it’s so remote, inaccessible for many and such a natural wilderness. We eventually packed up and got back on the road. After a big drive we looped back through Alice Springs (as always….), got some supplies and, being late in the day, headed to our trusty campsite on the Emily River just out of town. We used a better campsite this time that has been well used over the decades and was a good clear spot up on the riverbank. Another camper with the same idea came along the track and found their own spot further up the river. 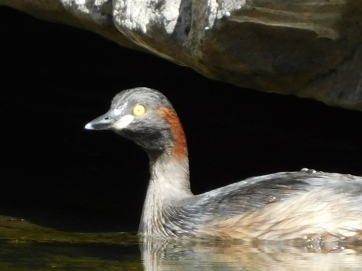