After three nights at Birdsville we had to get out of town before we got cravings for another camel pie…..we spent way too much time and money at the Birdsville Bakery! We headed off down the Birdsville Track which was pretty quiet. There’s a turnoff that is not signposted and looks like insignificant tyre tracks off into the gibber plains. We double-checked the GPS and maps and decided this track, known as Walkers Crossing, was our best option for getting across to Innamincka without spending hundreds of kilometres on the Birdsville Track and then more hundreds (plus days and days) going back up the Strzelecki Track.

The track improved greatly and turned out to be a great choice – a small single lane trail through some of the best outback, sand dune, gibber plain desert you’ll experience. The track had a lot of water in places but was 100% accessible with side tracks bypassing the wet sections. 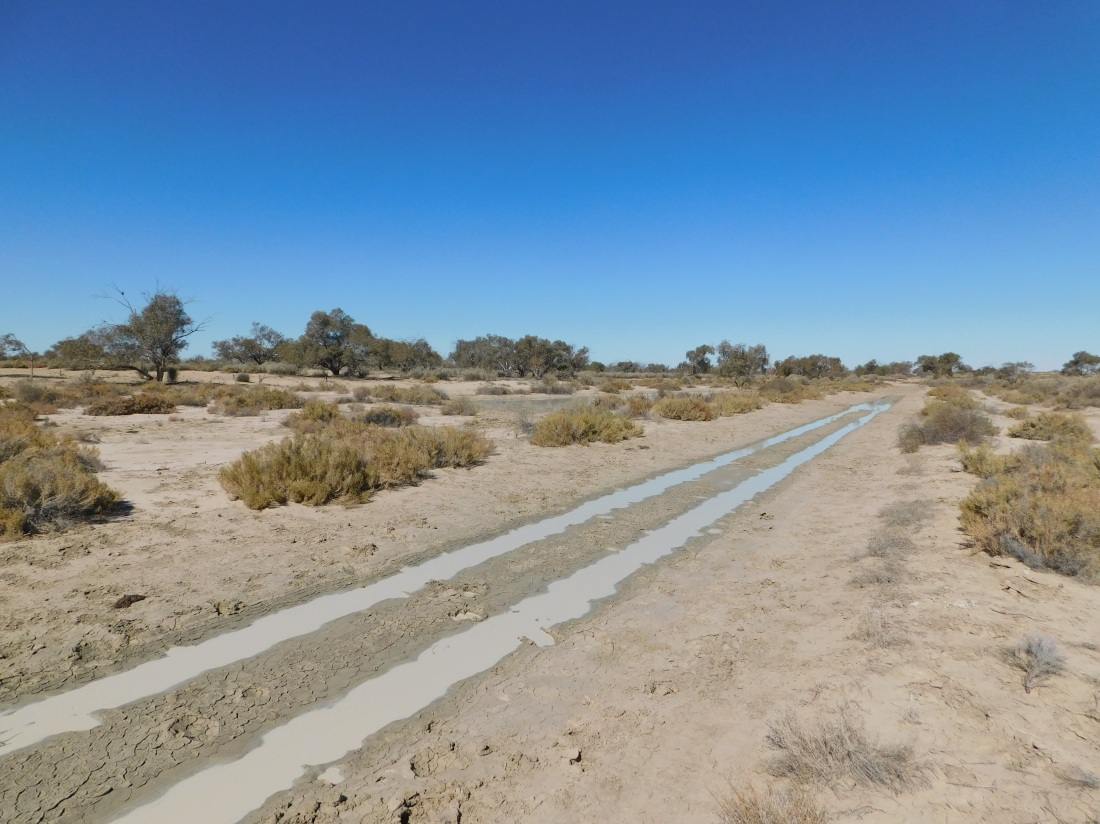 Like a mirage in the distance we saw a cow…or a motorbike…or a horse and cart…..the closer we got the more we made out a Clydesdale horse plodding along with a small wagon behind. We stopped and stared as, out of the deserted outback, Harry steered his horse Henry on their massive trek following the path of Burke and Wills – something like 3000kms – while also trying to raise money for beyondblue. We stopped and had a chat – only making 20kms a day means it’s going to be a long trip! 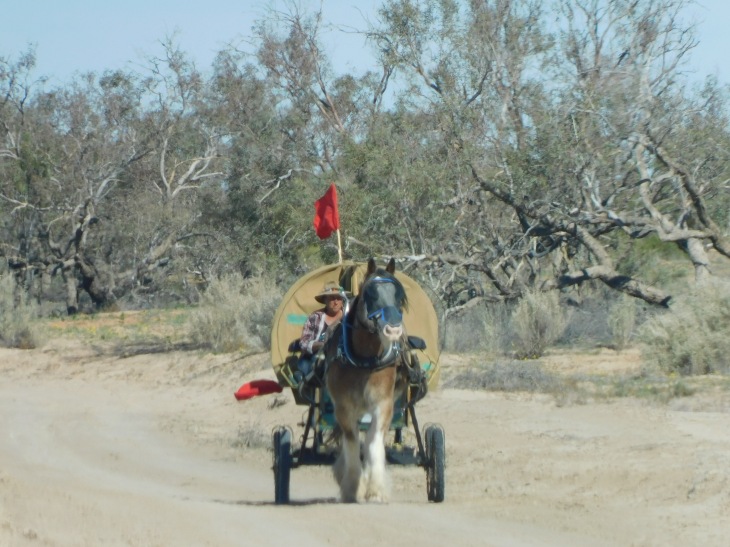 Out of Innamincka we found a good spot on the bank of the Cooper Creek. The wind was up and we opted for a spot that had dense lignum bushes that took much of the brunt for us. The big old gum trees and the wide creek was a beautiful sight with the rocky, barren gibber desert coming within a few hundred metres of the Cooper Creek oasis. 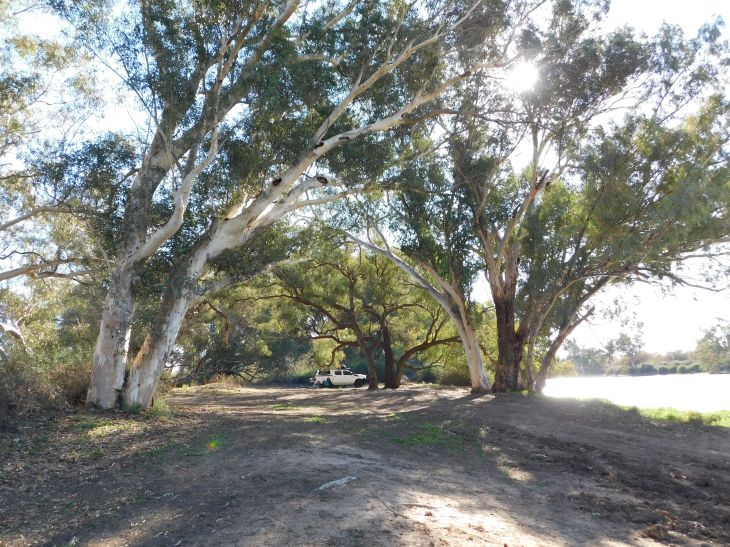 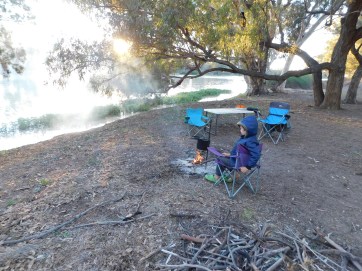 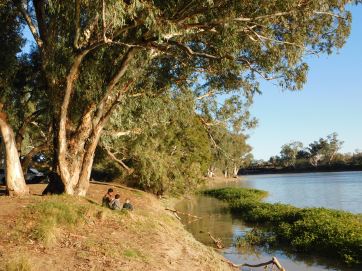 The water was freezing and Josh managed a swim but the boys struggled to get in past their ankles. The birds are awesome, raptors, pelicans, turquoise parrots, cockatoos and various water birds. 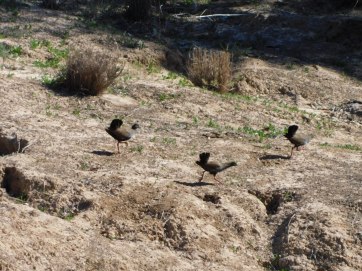 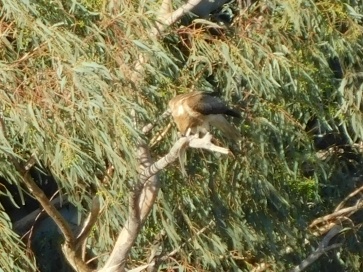 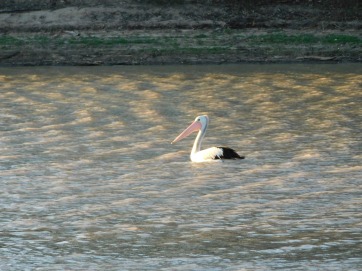 The fishing wasn’t too hot with only one small bream captured for all the effort the boys put in. We did a few day trips into town and out to the various monuments that mostly revolve around the Burke and Wills story.

The two graves, where the survivor, King, was found and a trip out to the Dig Tree which is just mind boggling when you read the extensive details of what happened there.

There was a nasty car rollover out on the station where the Dig Tree is which we stopped and checked because it was so fresh but whoever was in the car had been dealt with and the car isn’t being driven anywhere except on the back of a truck. 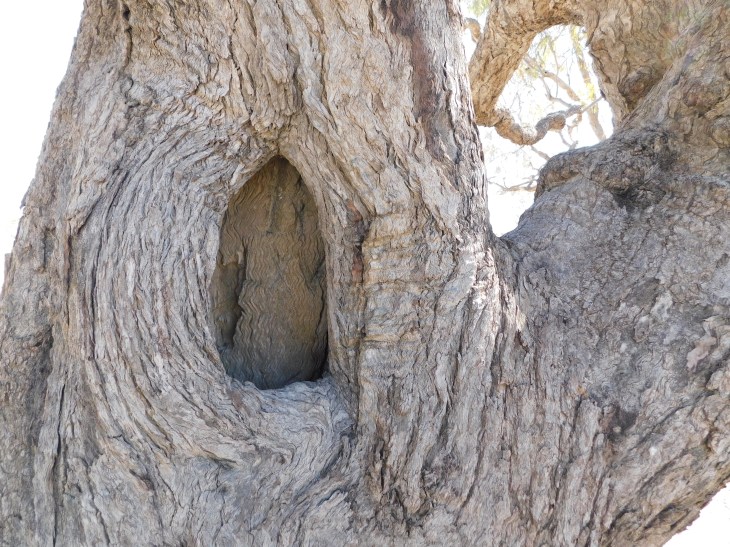 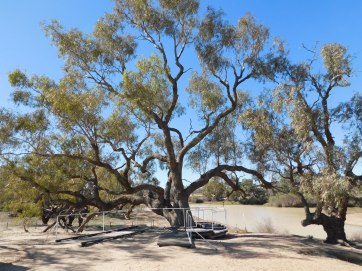 The strangest event was at Burke’s Grave where we managed to get tangled up with a large group of people who arrived at the same time who looked completely out of place in the outback. As it turned out they were a bunch of politicians from Adelaide who had (probably reluctantly) been put on a parliamentary committee for remote South Australia. What a funny bunch – eccentric, way over-dressed in designer scarfs and trench coats and shoes that looked way too expensive for the Innamincka dust (and that was the blokes!).They tried to pretend they were interested but they must have been shocked when they landed in dusty old Innamincka. We had a great lunch at the Innamincka Trading Post and spent a bit of time looking through the old nursing station museum.