Heading off from Leigh Creek we got to Maree and got our first hint that something big was happening (well, something ‘big’ for the quiet, deserted SA outback!). The South Australian Variety Bash was on its way and the town was preparing for an influx of hundreds of people. 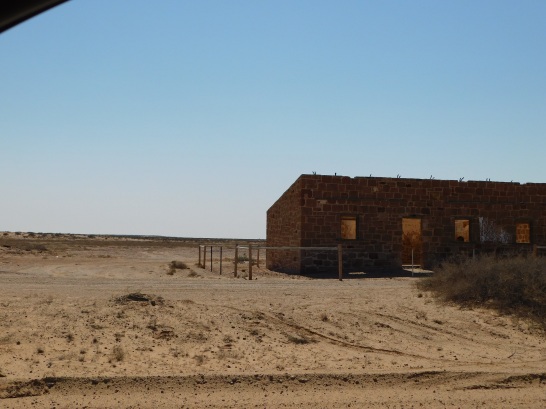 We stopped for some lunch and then got on the Oodnadatta Track heading west-ish. The Mutonia Sculpture Park out in the middle of nowhere was good for a stretch-the-legs break. 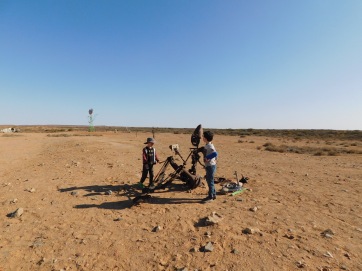 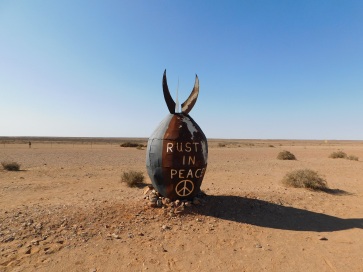 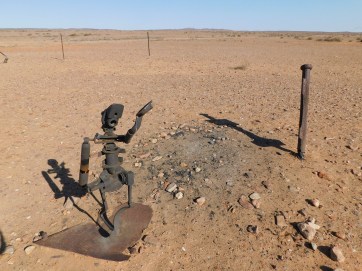 We made it to near the southern reach of Lake Eyre where we set up camp near an old railway using the, now unused, embankment as good shelter from any wind that decided to blow as it does out here.

Early the next morning, the usually docile Oodnadatta Track was a super-highway as the Variety Bash cars came through with the entourage of support vehicles. With the traffic and dust we decided to sit back and be spectators rather than get tangled up amongst it all. The boys got plenty of honking and sirens and flashing lights as groups of old cars (they must 30+ year old vehicles) came past all decorated with sponsors and themes.

Hopefully KFC was giving some serious sponsor dollar to the car with the monster KFC bucket attached to their roof – the fuel economy of an already old inefficient car was shot to pieces with that!

Finally the track quietened down and we got on the road. Not far along we pulled in to the Lake Eyre South lookout (we can confirm Lake Eyre is completely dry maybe except for maybe a trickle in the very north inaccessible part). The usually empty car park was full of the Variety mob – what a party! 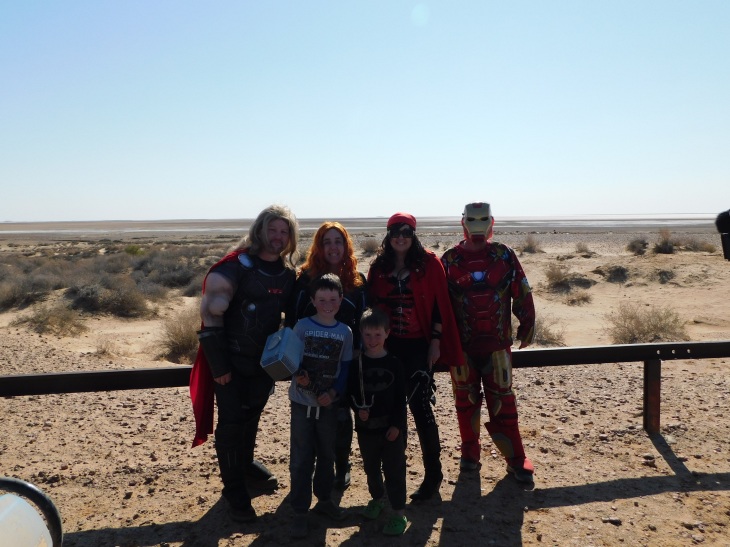 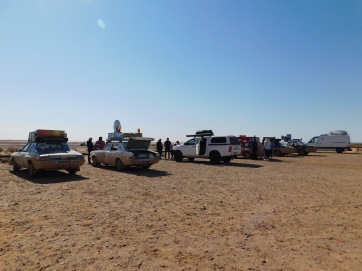 The beers were flowing at 9.30 even though the local copper had set up a surprise booze bus as they left Maree. The costumes and the effort these people had gone to was impressive. The “Pie-Way Patrol” pulled in dressed in their police uniforms and opened the back of their car which was full of stainless steel pie warmer drawers which had a range of pies and sausage rolls to hand out. Everyone seemed in awe of some big-name AFL player who was part of the Pie-Way Patrol but they are South Australians and we were ignorant New South Welshmen oblivious to anything AFL-related.

The pies were great anyway and the boys got loaded with lollies and stickers from other people there. Somewhere in the middle of it all, Channel Ten decided we were a good angle for their nightly news segment and started filming and asking questions. Available here: https://m.facebook.com/story.php?story_fbid=1112936475521471&id=233842463347174&anchor_composer=false

We left the bash people to continue on to William Creek while we deviated off towards the edge of Lake Eyre. A bit of a drive out to the camping area at Halligan Bay with flocks of emus running alongside the car. 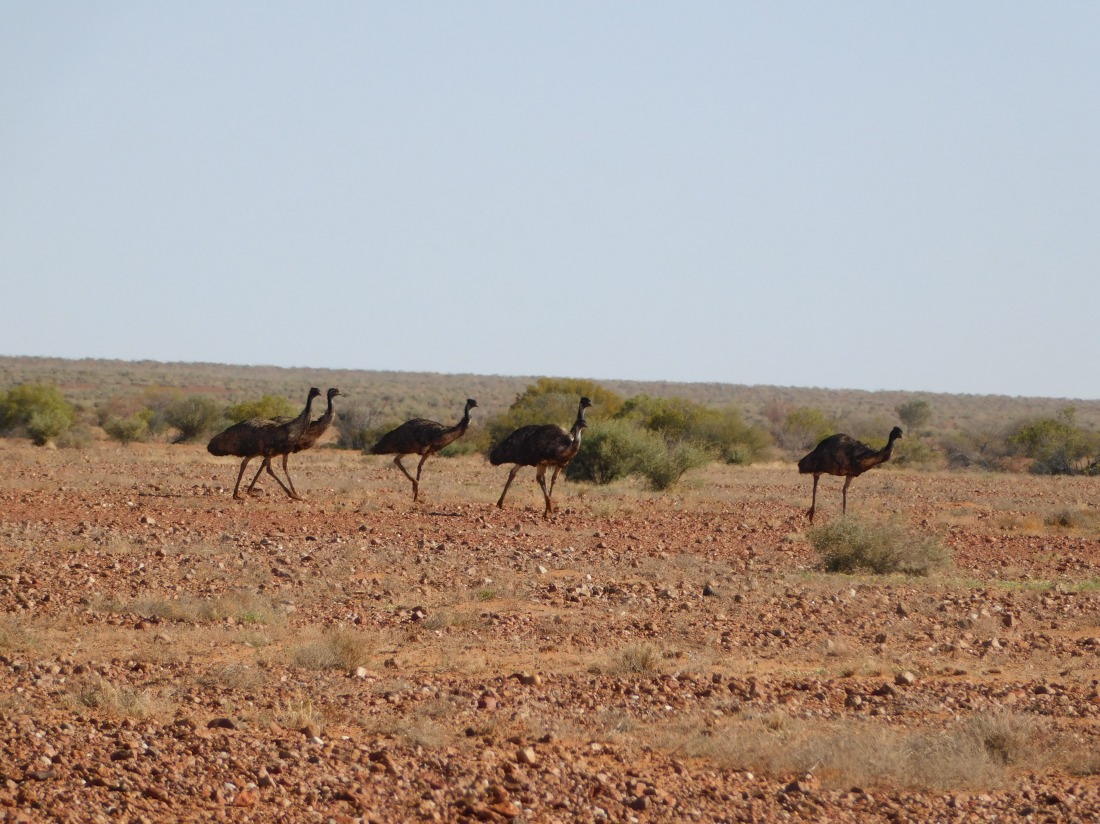 It’s a diverse landscape, harsh and arid. Lake Eyre is amazing in it’s remoteness and the sense of nothing out to the horizon. 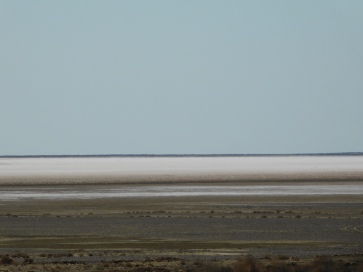 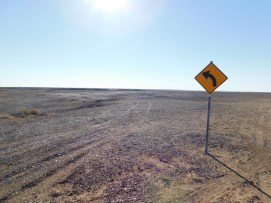 We would love to get back here when the water is 10 metres deep and overflowing into Lake Eyre South but that has only happened a few times in memory. The star-gazing is amazing with some shooting stars that were more like watching giant meteorites burning up and raining down through the sky. 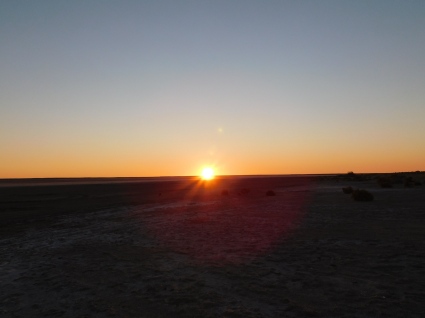 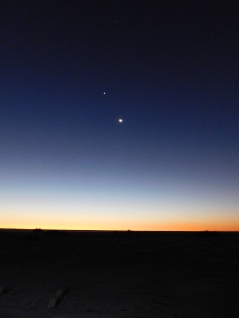 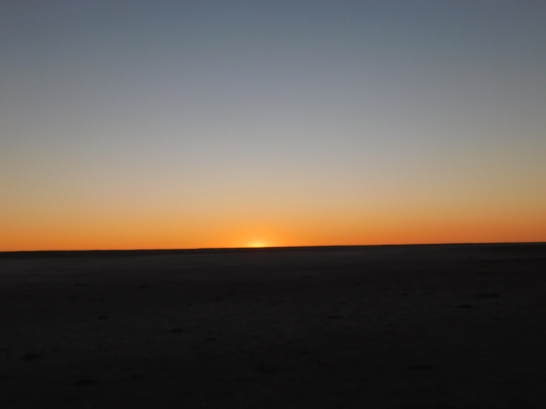 The cricket pitch was firm with a nice crust that produced good bounce and turn but the second you broke through that crust – turning to chase a ball or swiveling at the crease –you hit some wet, gluggy mud which required the pitch to be relocated several times! It was all fun and we ticked off the lowest point in Australia being about 15m below sea level. 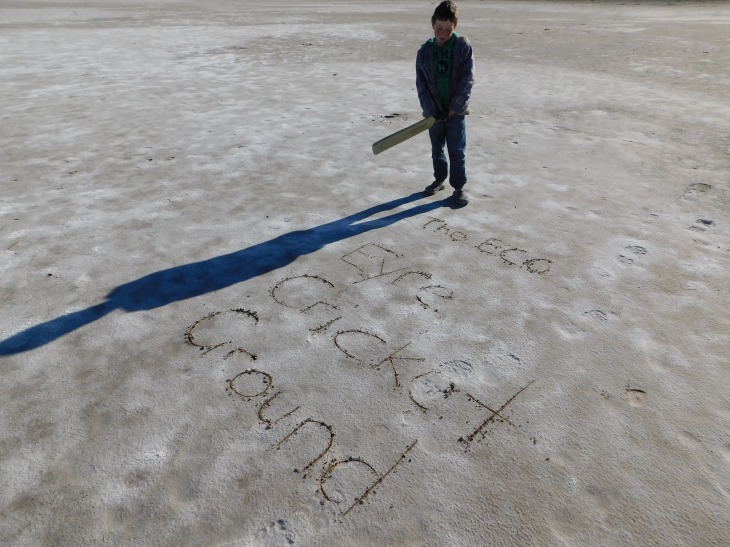 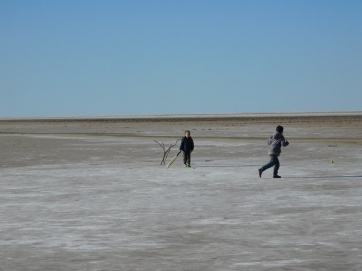 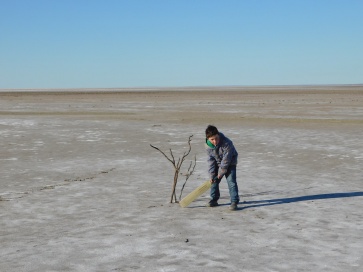 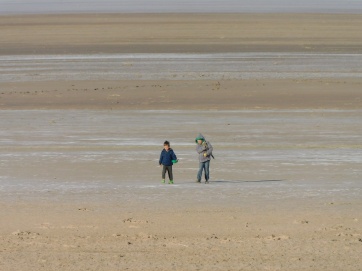