Our first camp on CYP was nothing special – a small track off the main Peninsular Development Road and we set up where many others had before us for an overnighter. It was the Kendle River – dry except for a small remaining billabong that had cattle hanging around it. The spectacular Palm Cockatoos that came and sat right above us were a great new addition to our bird-spotting list.

We stopped in Coen for some fuel which was pretty reasonably priced and then headed off up the PDR turning off where it keeps heading for Weipa and the road to the tip of Cape York begins. A quick lunch stop at the Old Moreton Telegraph Station where we discovered they had a pie oven which hit the spot. A small but informative display about the telegraph line and the history of flooding in some of the wetter seasons was interesting. 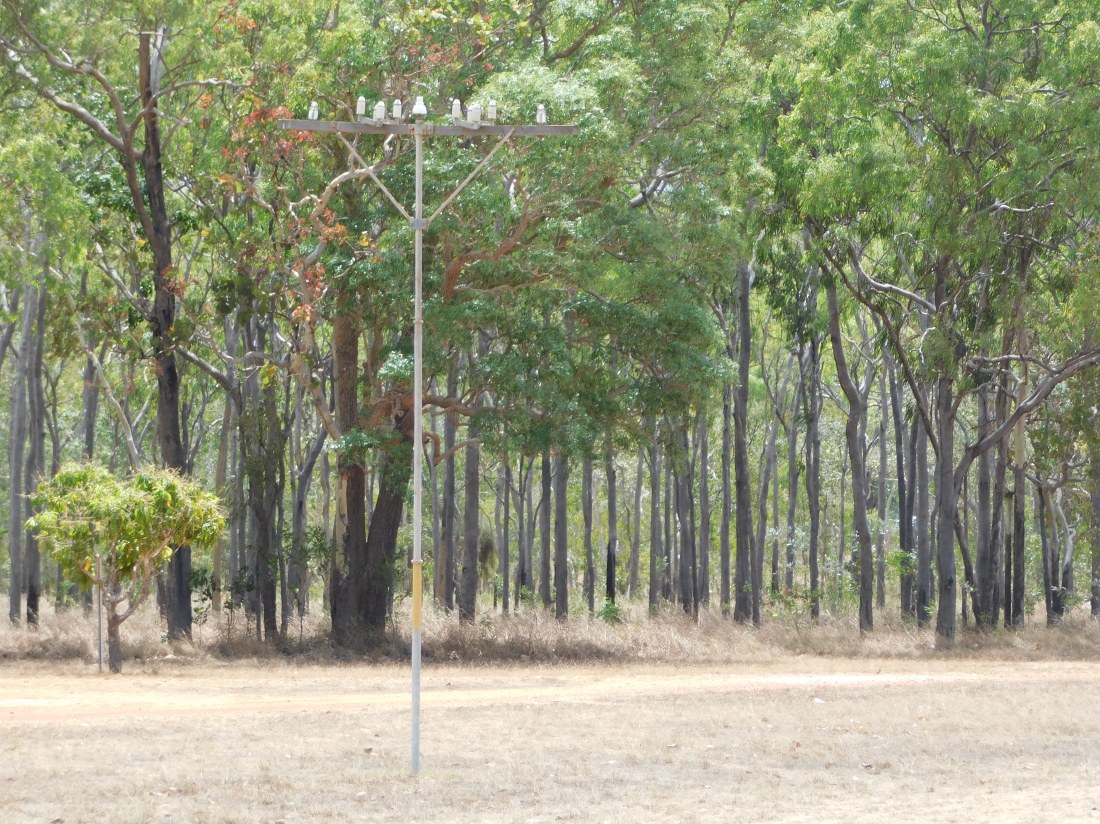 At Bramwell, the main road heads off to deviate around the headwaters of a series of creeks while the Old Telegraph Line keeps heading straight ahead, due north. An executive decision was made at a very high level in the management structure within the Hilux that we’d potter up the Old Telegraph Line and see what condition the track and creek crossings were in. 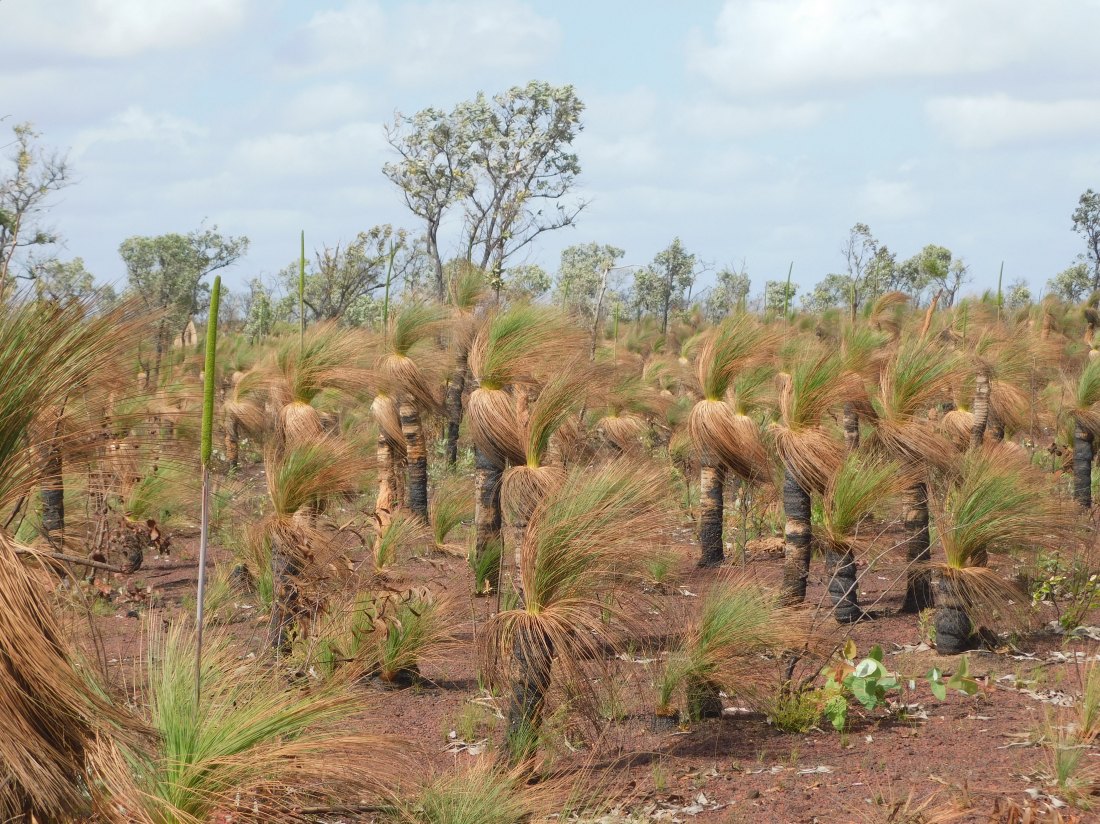 Not far in is Palm Creek and the choice of steep narrow entry and exits were all bad. Eventually we found the easiest and slowly made our way through – luckily the creek is dry so there wasn’t the need to navigate water as well. 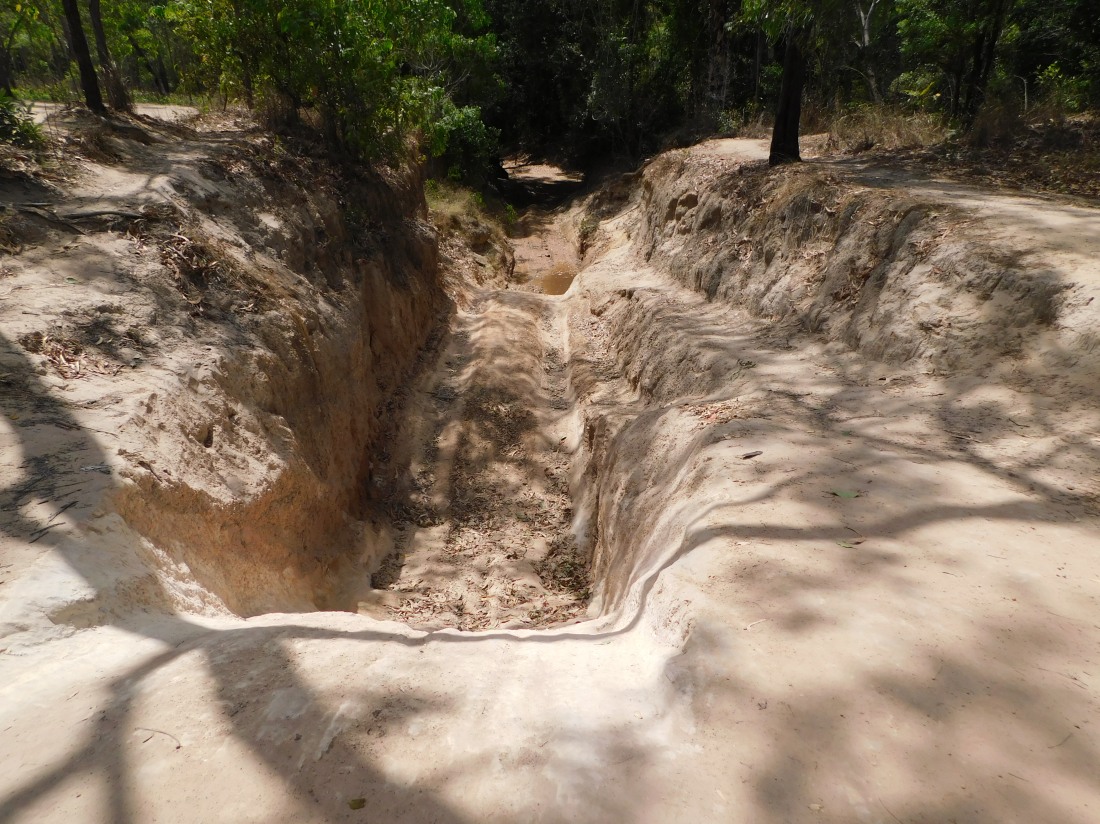 We pushed along the track pretty slowly – it’s not just the creek crossing that are the challenge, it’s the washed out, narrow track as well.

Through a fairly easy crossing at North Alice Creek and we spotted a good camping spot off to the side and decided we’d set up for the night. A group of three NSW cars came through late in the arvo but otherwise it was very quiet on the track.

Next morning we were off early and made it to the next creek crossing that was shallow but had some good swimming holes. It was warming up already so a swim was perfect near the small waterfall.

We chatted to the NSW convoy, Mark and Mary and Bel and Brad and decided we’d tag along with them – either safety in numbers or more brainpower to chart the best course through the more serious creek crossings to come.

We made it through the iconic and notorious crossings with Amy pulling out some pretty impressive 4WDing to show up some of the blokes who were getting stuck with no traction and giving their vehicles a good bashing.

Gunshot was relatively simple (we didn’t do the ‘drop’…!!..there was a chicken track) although there was one scary moment when Amy launched up out of the creek but took the wrong track and nearly went over an embankment – luckily two of our travelling friends were up the track and made her stop and reverse back to safety. 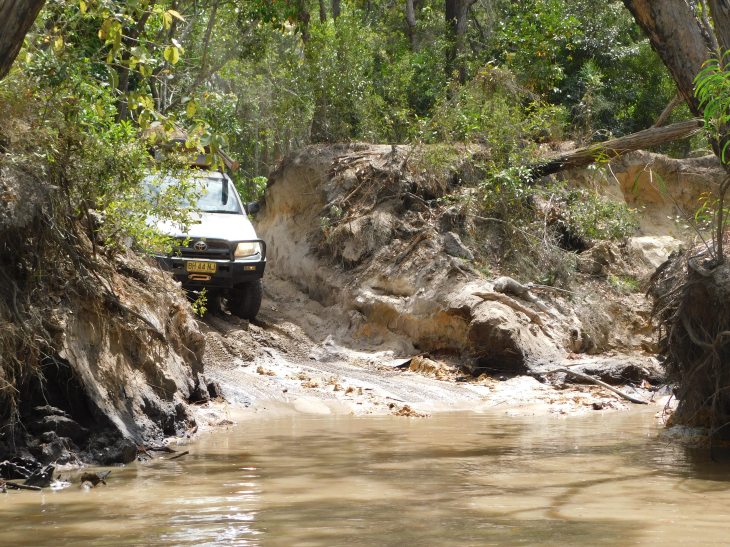 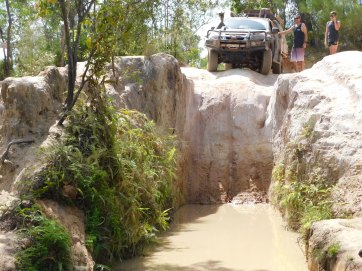 Interesting that we heard an account of a vehicle making the same mistake a day later only they didn’t stop in time and rolled their Prado down the embankment – end of the holiday for them plus the reputed $6-8k towing fees to get your wrecked car out of there. In fact, the daily stories of damage and destruction of cars along the Tele Track is almost unbelievable except that when you arrive in Bamaga you drive past the wreckers and see the most recent cars that have been towed in – some with obvious damage; others that have less exterior damage but there are wheels bent in weird angles, engines and electrics flooded from deep creek crossings and axles that have failed the test under immense strain. 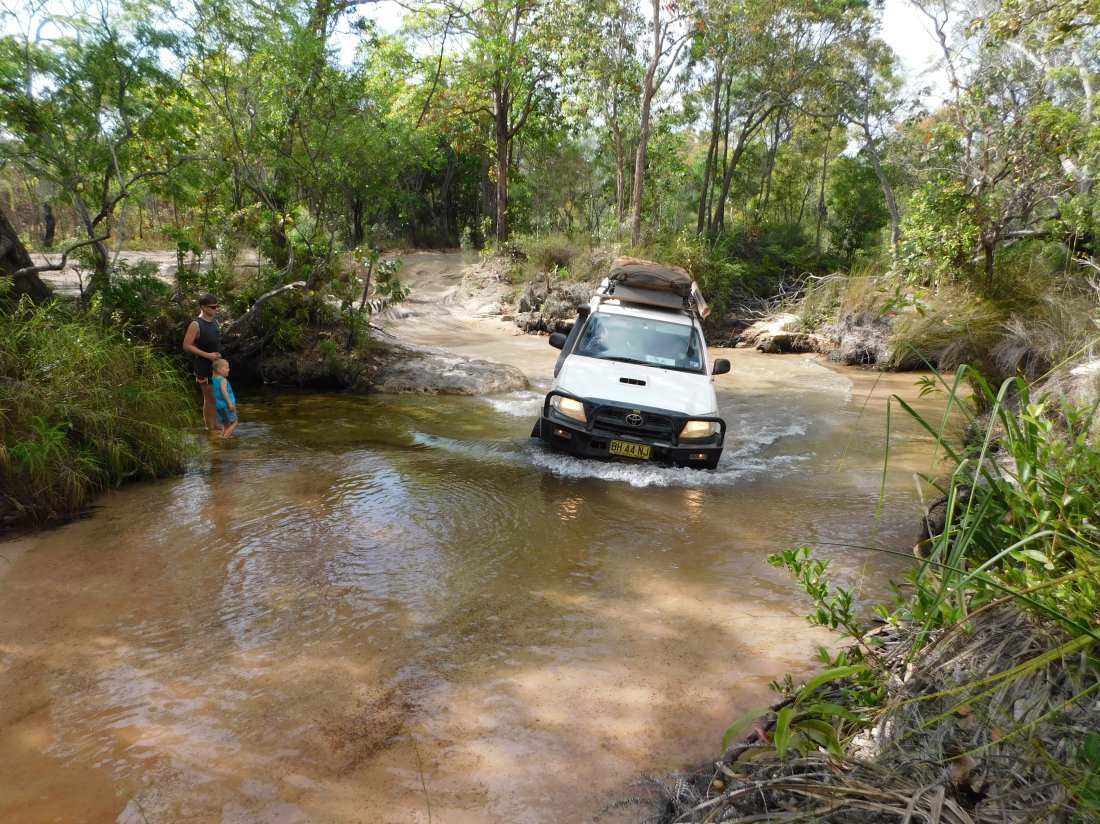 We camped at Scrubby Creek near Fruit Bat Falls so we could have a swim in the afternoon and then get back in there early before many other people the next morning. Fruit Bat Falls are amazing. Below the falls is the most incredible crystal-clear swimming pool with a solid flow of water that gives a great shoulder massage!

Above the falls are some cool little holes where we sat and lazed about as the fast-flowing water rushed by. The boys could jump off the rocks and had a great time. 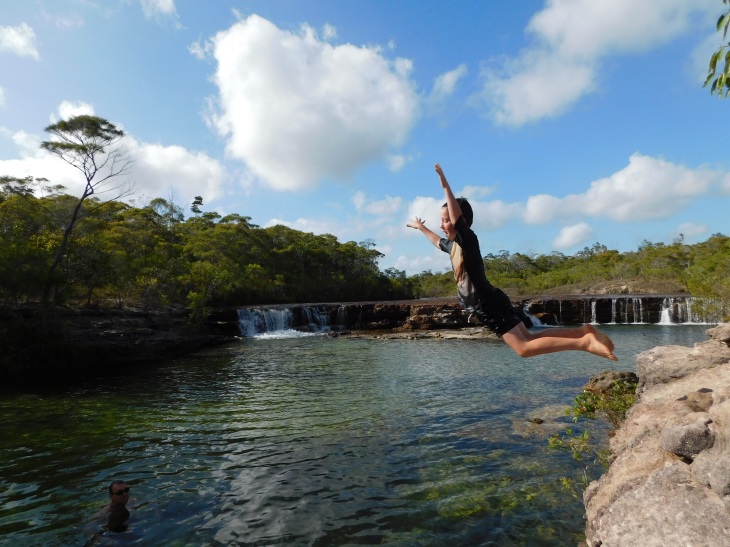 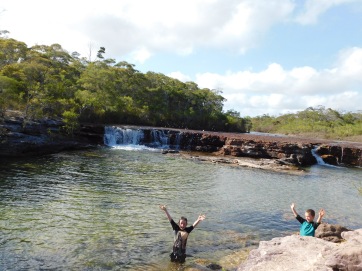 Scrubby Creek is one of the deeper creek crossings along the Telegraph Track and we watched about ten cars go through – finding out the next day when we caught up with them that most had water leak in to their cars and/or camper trailers. After a swim the next morning at Fruit Bat Falls with no one else around we got through Scrubby Creek too – but by taking a steep but fairly easy track around the main deep pool. 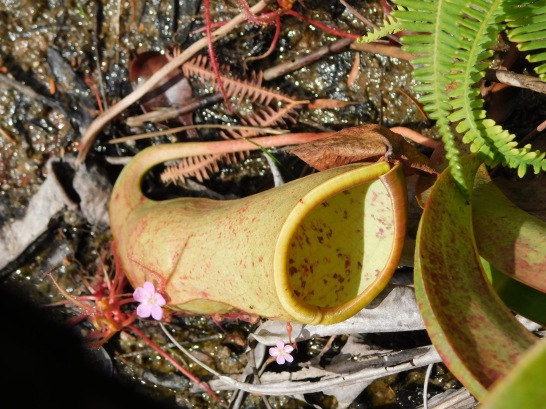 Next stop was Edith Falls and Twin Falls – incredible places both picturesque as well as fun swimming holes. Twin Falls is great for kids to play in and for adults to float in the shallow water.

Edith Falls is just around the corner and has to be one of the best waterfalls in Australia. There are lots of safe spots to jump off high rocks into deep water and Lachie and Cammy both showed some bravery in leaping off (with Dad cautiously waiting in the water below). 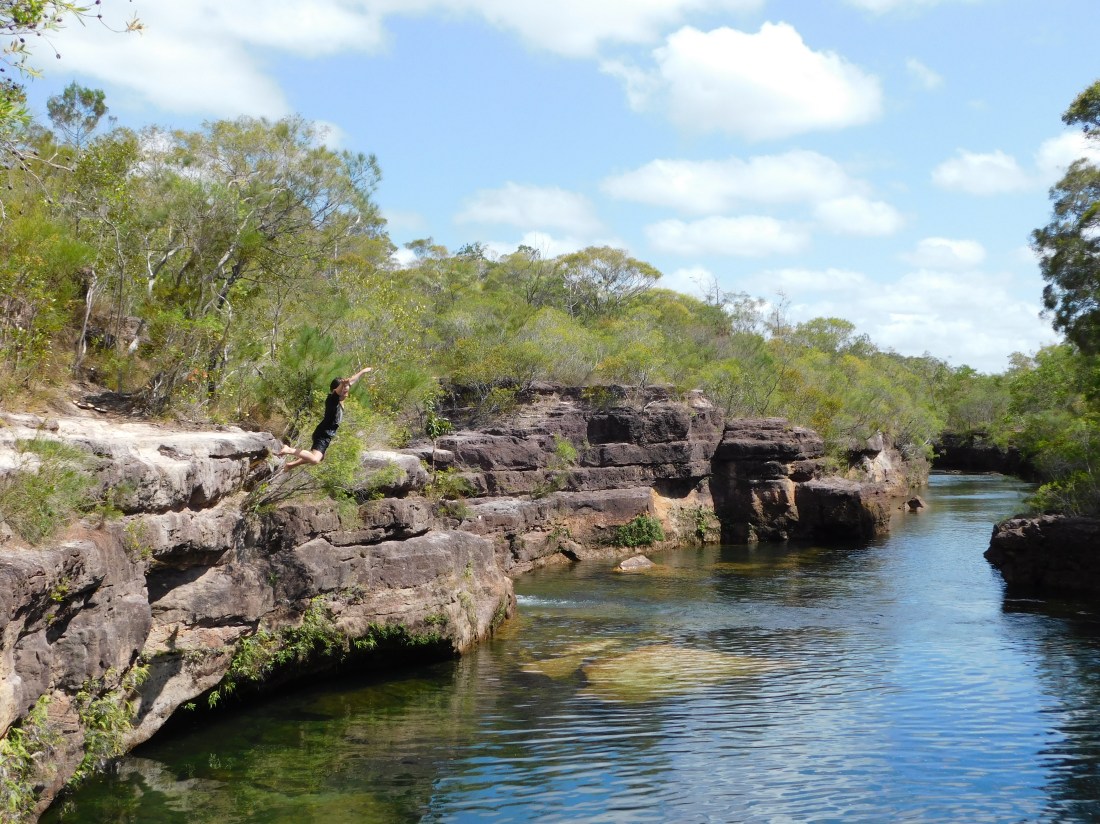 Lach and Josh also did the ‘drop’ into the main Edith Falls – it’s not so much a jump because it’s such a narrow gorge but rather you step off the top and pencil dive into the deep water. The force and mist and noise are fantastic. 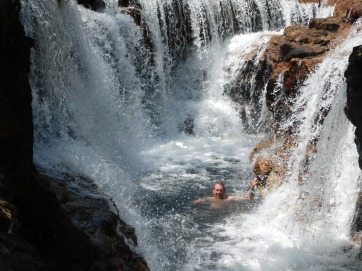 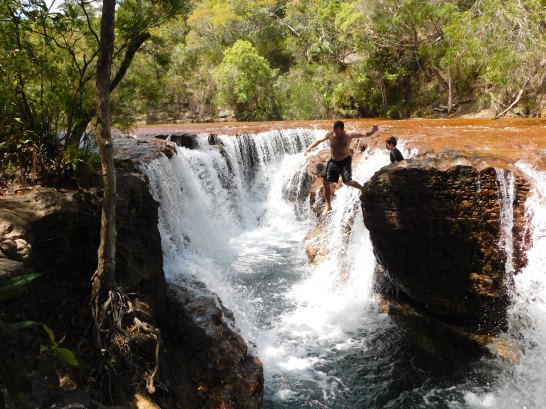 We made it through a few more creek crossings before we reached a point along the track that is the last chance exit point to the safety of the main Cape York road – once you go past this turn off it’s very difficult to return back through the creek crossings ahead if you reach one that is impassable or too hairy. You know how brave and fearless the JALC-OZ team is – we don’t take the easy options…..but today we were out of there like a flash.

Word on the street was that at least one of the creek crossings ahead were deep water and on a daily basis claimed the scalps of anyone making the slightest mistake. The NSW group we were with made the same decision – as did many others. The track had gotten quite busy since we’d first started out and many people still pushed on along the track – typically in larger groups that could work together to get through what lay ahead.

We drove out onto the main road and then back in the final creek crossing at Nolans Brook where we found a great campsite and superb swimming at the crossing – crystal clear water except for when a car would come through for the final crossing of the Tele Track and the water would get stirred up. There would have been 20 kids all in the water playing together which the boys loved! We watched dozens of cars come through over the two days we camped there with little drama really – most spent some time checking it out and making their decision on depth and steepness and then got through with water mostly only just getting over their bonnets.