Leaving Speewah and Cairns behind, we headed west through Mareeba again and then south towards Atherton to spend some time exploring the Atherton Tableland. The best option we decided was to head out to Tinaroo Dam and set up for a few days while doing day trips to all the places we wanted to see.

The dam is big and there are various campgrounds spread around catering for hundreds of people as the dam is popular with locals for fishing, boating and water-skiing. It was a Friday and we hoped we were getting in early enough to find a nice, quiet, out-of-the-way spot from any crowds or partying.

The first warning sign that the locals might be a bit wild on weekends came when we had to lend our phone to a bloke who had just crashed his car into an embankment and wasn’t going anywhere in a hurry – actually, it turned out it wasn’t his car at all and he was in all sorts of trouble when the real owner found out the extent of the front-end damage. The “mob of kangaroos” he had swerved to miss weren’t there when we got there and his mates didn’t have the same marsupial-based version of events as the driver – explaining that the weight of the all the grog in the boot – being taken out to the dam for a big party tonight – had made the back of the car swing out as they came around a corner. The fish-tailing that they had been doing was evident all along the road and they were desperate to get the car out of sight asap before the constabulary happened to drive by and draw the same conclusions we had. Anyway, we asked where they were “camping” (aka partying) and struck that site off our list – we did feel sorry for the driver though who was in shock, looked a bit bruised and confused and worst of all…it was his birthday…and his party tonight!!

We checked a few campgrounds but decided on Downfall Creek which was big and had a nice flat high spot with nice views where we could set up. Within hours we were being inundated with cars and a large group with fishing boats and probably around eight cars set up near us.

In the end they weren’t too bad. They did kick on around the fire til pretty late (or early) but they also wanted to get up early to get out fishing so they didn’t go over the top. We bought a yabby trap to try and catch some redclaw which all the tourist information says are in huge numbers here but we didn’t catch any and, surprise, surprise, no one else seemed to be tapping into the vast redclaw stocks of the dam either. 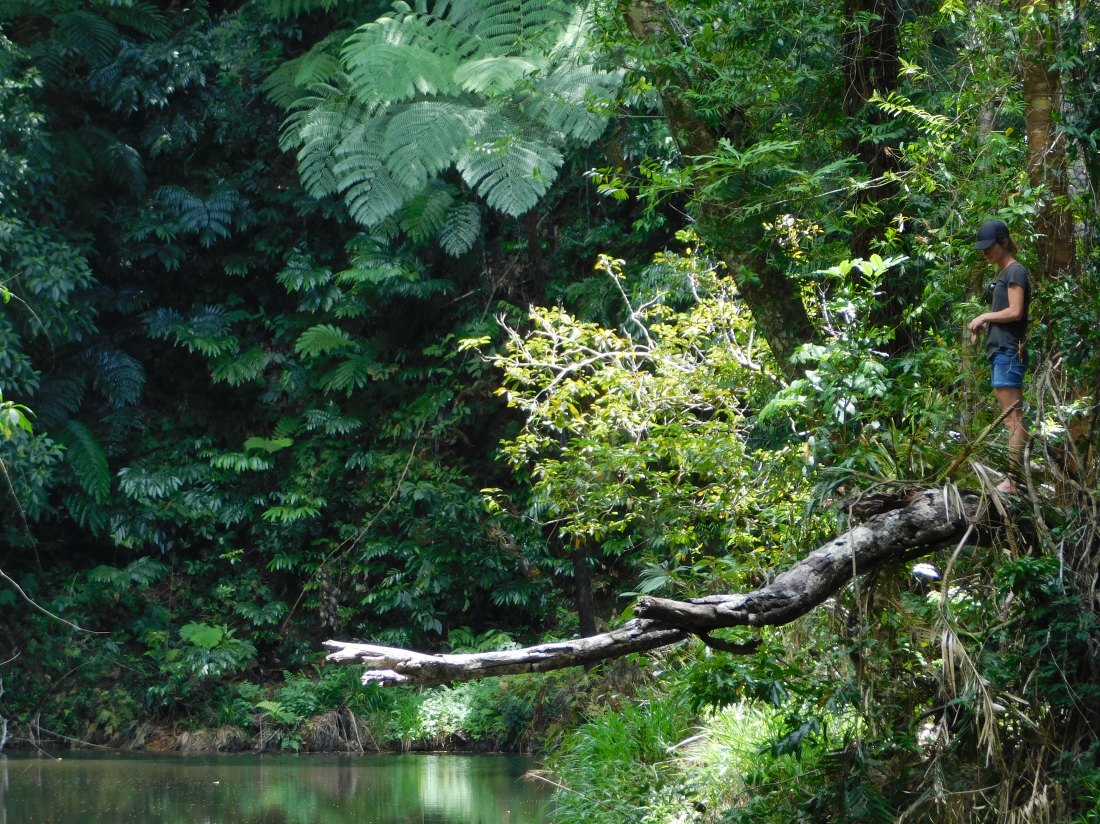 From Tinaroo we did various day trips – the first was around the dam itself where we could stop in at the different campsites and see what they were like. A huge old Strangler Fig tree called the Cathedral Fig is only a short walk in on a boardwalk.

There are various volcanic features such as crater lakes which we could easily access as well.

We spotted cute Musky Rat Kangaroos in the rainforest along with the White tail rats notorious for destroying any electrical wires they can find to chew on under your car bonnet!

There were lots of turtles in the dam and one came up looking for a nest site – only to find much of the campground was compacted. The boys monitored it’s movements and made sure it wasn’t run over by the growing traffic through the campground. We even got the shovel and loosened up some soil to help out.

The Bush-stone Curlews are in good numbers and added their screaming to the massive chorus of other birds including the huge number of waterbirds. An amazing phenomenon we watched was a flock of about 40 pelicans working with a flock of possibly 100 or more cormorants and together they circled themselves into a swirling mass of black and white birds – some splashing the water and some diving – eventually herding whatever fish they were chasing into the right spot where they landed and feasted on the trapped food. It was an absolute frenzy and then after five minutes everything went quiet. 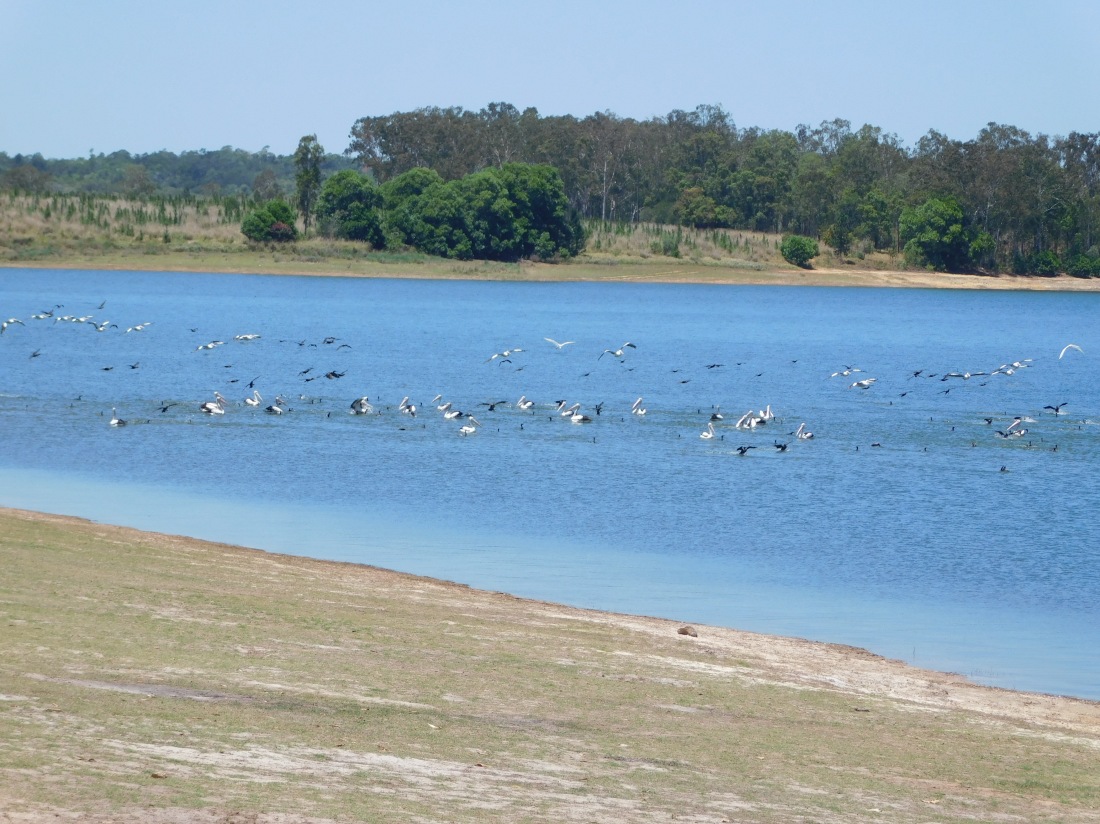 The next creek along from our campsite was a beaut little spot called Kauri Creek which had a small, crystal clear steam with a nice grassy bank to sit on and watch the boys play. The other great swimming spot was at Lake Eacham which is a crater lake that only fills with rainwater and it is so clean and clear that there were even some scuba divers going in for an explore while we were there swimming. 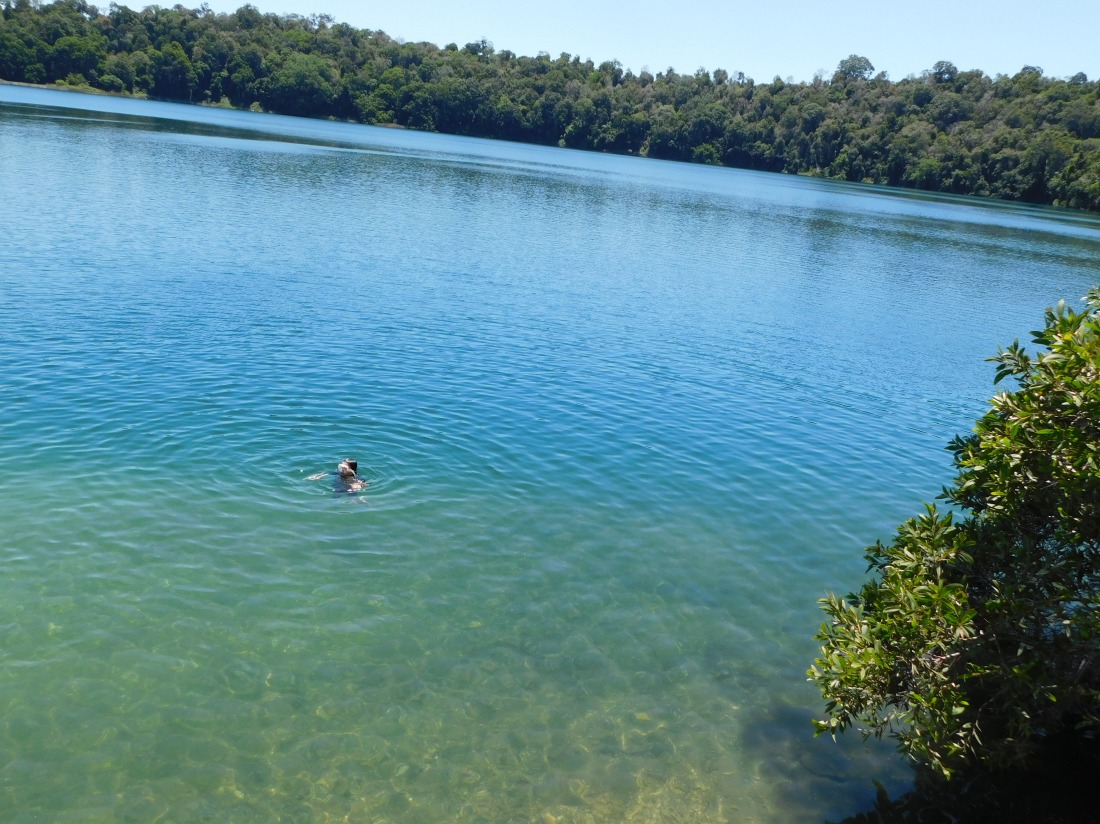 There was a big fig tree we sat under for shade and the were some great birds like the Double-eyed Fig Parrot to watch.

Lake Barrine is the other crater lake nearby and we did a short rainforest walk that passed by the giant twin Kauri trees which have been growing away quietly for a few hundred years.

The little village of Yungaburra was a highlight with a small platypus viewing area constructed on the main creek through town.

There wasn’t much happening in that little pool so we found the walking track that sneaks off under the road bridge and off along the creek. Amy was lucky enough to spot a platypus swimming across the creek but it was a fleeting glimpse and it wouldn’t stick it’s bill up again once we were all in our platypus-spectator positions. 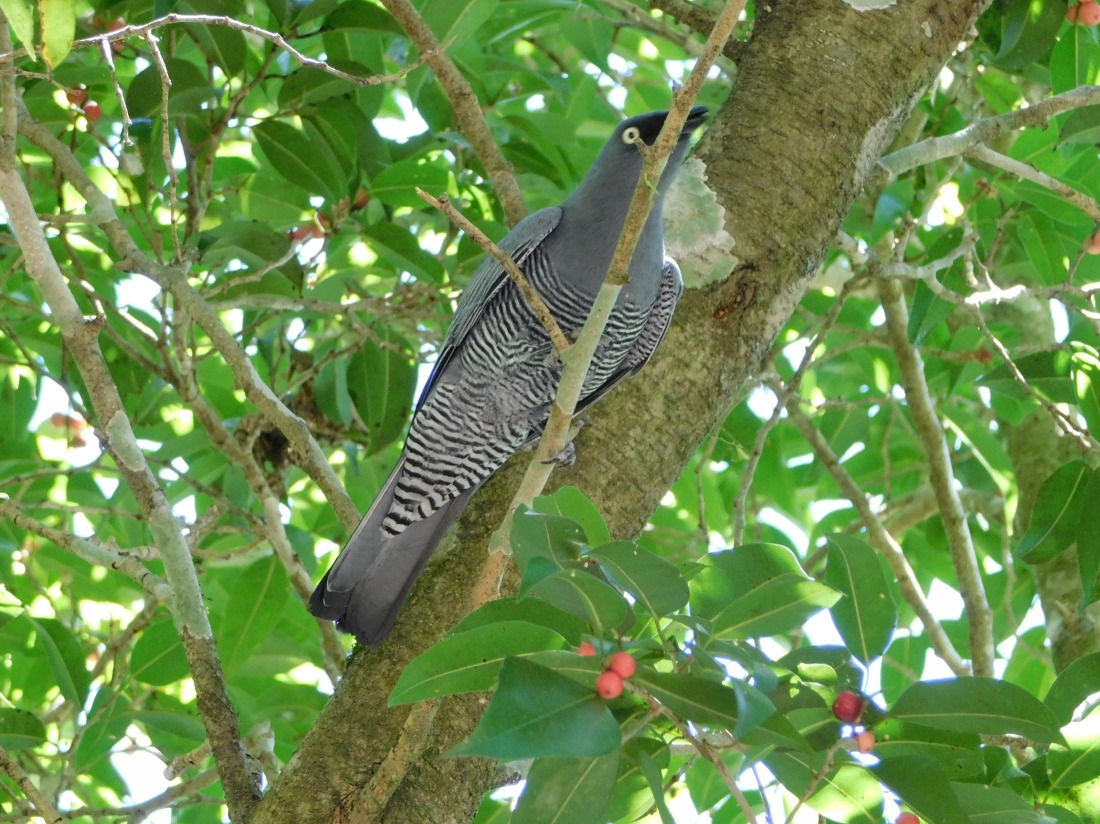 Not much further along the creek, however, and as we crossed a small suspension bridge we found two tree kanagaroos sitting quietly and because we were up five metres on the bridge, they were at eye level so we got a great view. They are Lumholtz Tree Kangaroos and are fairly rare as their rainforest habitat is damaged and they get hit by cars as they move between patches of bushland. We were pretty happy to have spotted these two while not even looking or expecting them to be here! 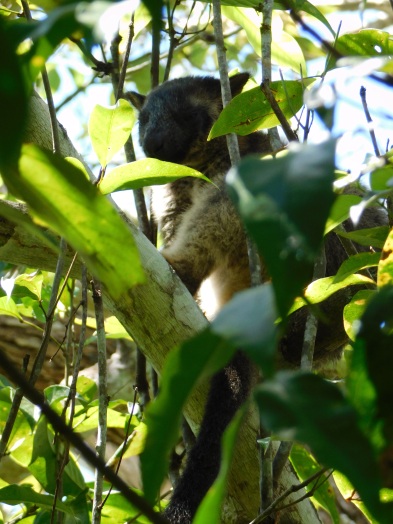 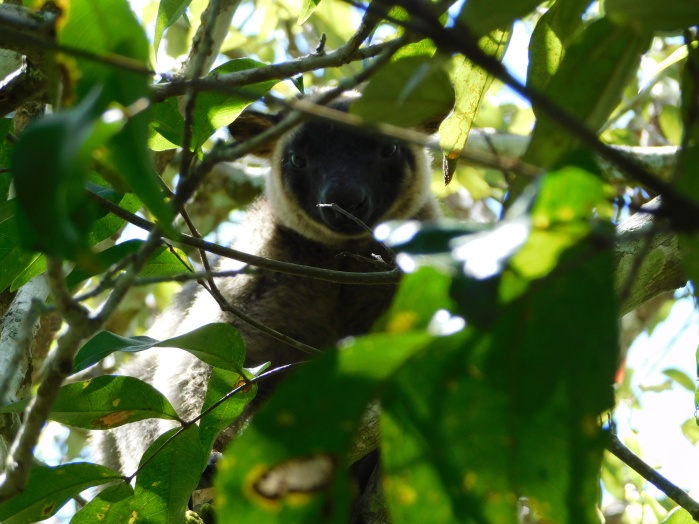 The boys had spotted the ‘pick-your-own’ strawberry farm from a mile away and somehow we had managed to drive past about five times before we had to stop in and have a go. There were still some nice fat strawberries in the field being so late in the season and we picked two punnets. Then – hot and exhausted from our six minutes of fruit picking – we sat in the shade and had strawberry ice cream and sorbet. All in all we had a great time on the Atherton Tableland – it’s definitely a destination you need a good few days or a week to explore. 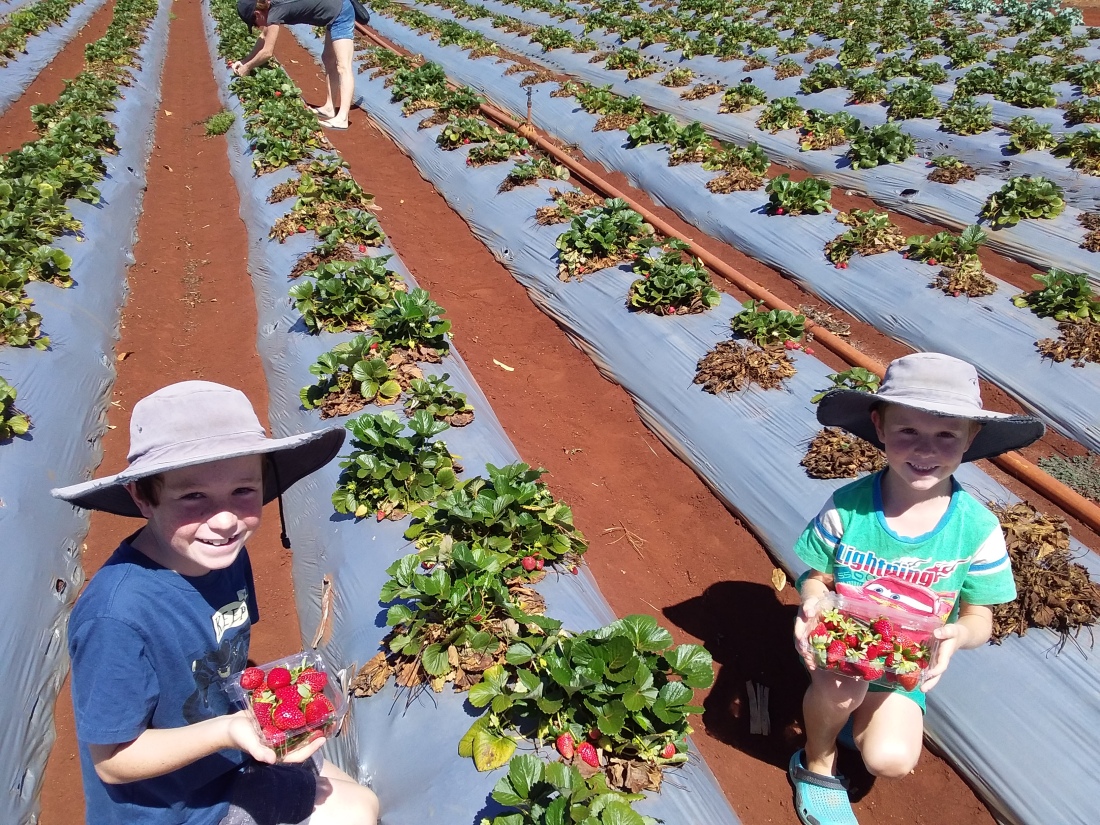