We departed Tully Gorge and pointed south down the highway. The Hinchinbrook area is very scenic – both the huge Hinchinbrook Island that is only just separated from the mainland by a narrow channel – as well as the lush mountain ranges in the background to the west. We stopped in  at the highway town of Cardwell which is right on the water. A stroll on the jetty was worthwhile as we saw a man catch a small hammerhead shark and even helped by taking a photo on his phone for him.

The information centre was great with very helpful friendly staff who weren’t trying to sell skydiving or island cruises like many of the visitor information centres seem to be focused on these days. Their best tip was the local op-shop that has lots of books for 50c so we stopped in to those very nice folk and picked up four books to keep us going – Lach’s choices were “Hiding Out” by Elizabeth Laird and “Come Danger, Come Darkness” by Ruth Park. Amy tried to pay the $2 but the 50c book deal is actually 50c for as many books as you carry away with you. If you are ever passing through it’s worth a stop in to browse the books and grab a 20c jaffle maker or 10c toaster while you’re there.

The highway winds up and over the Cardwell Range with a spectacular lookout just off the road. The main lookout that most people hop out of their cars for is terrible with huge powerlines right in the centre of the view but make sure you do the short 100 metre walk to a higher lookout which is much better with uninterrupted views across the turquoise waters, dense mangrove creeks and main channel of Hinchinbrook Island.

The climate or at least the weather conditions seem to change instantly as you travel over the range. It definitely feels like we are leaving the wet tropics behind. We decided to head out to the Broadwater campground in Abergowrie State Forest to base ourselves for a few days. Another pleasant drive through the sugarcane farms with the green hills as the backdrop. The cane harvest is in full swing here too and it pays to be alert for the cool little cane trains which criss-cross the roads – the major roads have flashing lights at the train crossings but the smaller country roads are where you need to be on the lookout as the small locomotives come trundling along with 10 or 20 cages full of cane trailing along behind. The funniest was in the hustling, bustling little town of Ingham where the cane trains honk their way through the main streets with everyone expected to give way – cane is king around here!

Abergowrie State Forest was quite obviously trashed by a cyclone with just about all of the pine plantation which you drive through on the way out to the campground having been flattened. It turns out the area was in the eye of Cyclone Yasi in 2011 and there are some amazing photos of the destruction which the national parks people have put up on the information boards. The campground is looking great now – but there was some serious chainsawing required and there are photos of the army setting up camp here to spend days clearing the mess of fallen trees and damaged boardwalks. There’s a beautiful creek which has a top swimming hole complete with a small platform and ladder for access.

The downside was the occurrence of Bullrout stonefish which have spines that inflict extreme pain if stepped on – they occur in many coastal streams but for some reason there were multiple warning signs here and we wore sandshoes while swimming to minimize the chance of an unwanted encounter. Cam and Josh spotted the unmistakable ripple of a platypus early one morning and as it swam closer towards them it was sure to be a great photo – a great photo of a turtle as it turned out – you know, foggy morning, mist rising off the water, just waking up etc! 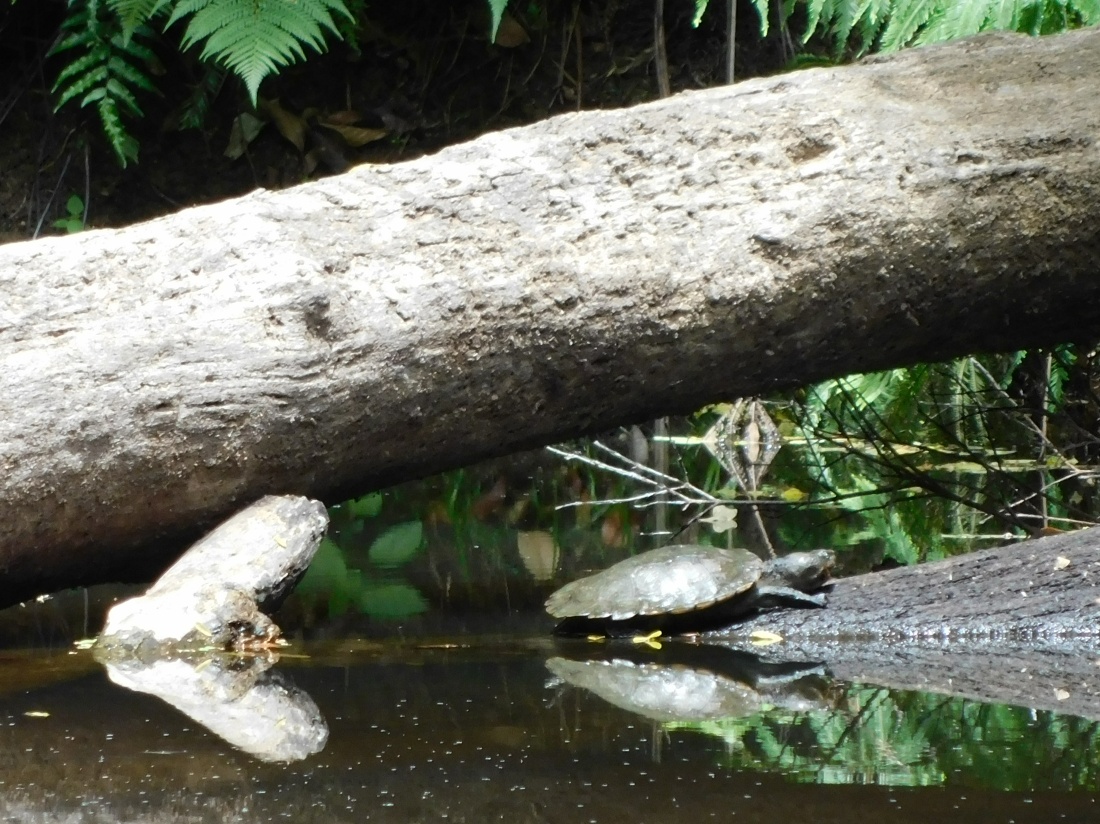 The turtle was one of about ten residents that swam to the swimming platform as soon as anyone arrived – hoping for a feed. The campground was empty except for one other couple who started out miles away and then the next morning moved right over near us – acres of open grassy camping and we ended up 30 metres away from each other! But they were quiet, just wanted the same shady spot we had and we ended up being able to have a good chat (except the bloke spoke no English at all) and shared maps and information on places to go and spots to camp. There’s a short walk along a fairly new (rebuilt post-Yasi) boardwalk and there’s a great fig tree which attracts lots of birds. 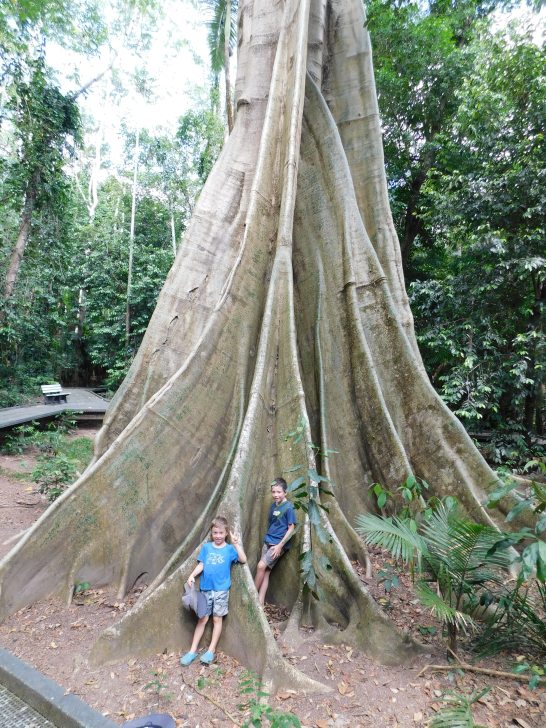 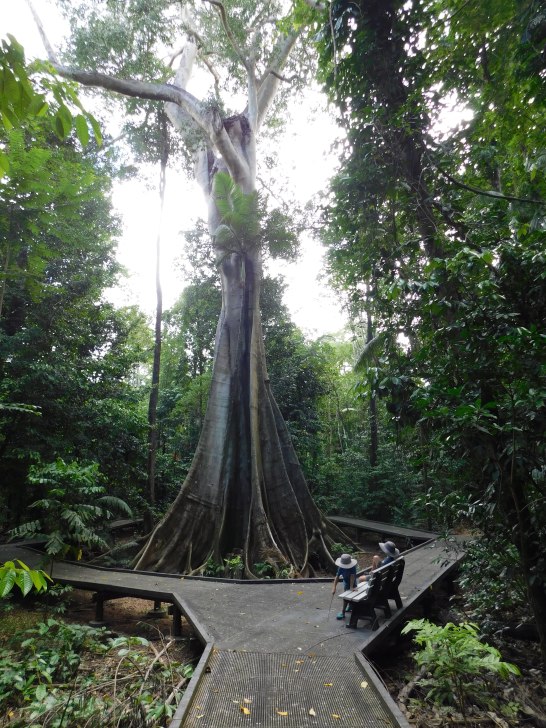 We used the camp as a base to explore the Ingham region (really it was just taking Josh for a drive so he could go train-spotting for cane trains – Amy is trying to get it through to him that being a cane train driver is not a sensible career change). We poked in at all the little beachside villages along the coast Lucinda, Taylor’s beach and Forest Beach.

We had a fish burger and chips at the small Lucinda store which has views out to Hinchinbrook Island and along the massive jetty that gets the sugar out to the waiting ships – this is a serious jetty at 5.6km long – it disappears out to sea!

In town the visitor information centre is also the entrance to the Tyto Wetlands which are a great mix of wetlands, raised boardwalks, and trails through different habitats with lots of birds and turtles. 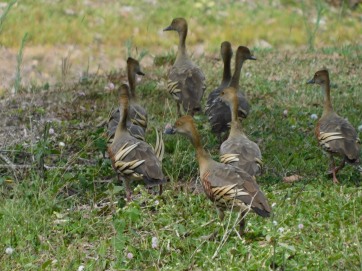 Back at the campground, the highlight was the Noisy Pittas which hopped around the camp – they would be a metre away from our tent in the mornings and it was pretty cool to watch them get about their day flashing their spectacular colours – yellows and reds and greens. The campground gets a big thumbs up from us – heaps of space, nice swimming, good facilities with gas bbqs, water taps spread around and a cold shower to cool off as well.