We got back on the Bruce Highway and headed south towards Paluma Range. Our first detour was up the steep, winding road to Wallaman Falls which holds the title of the highest single-drop waterfall in Australia. The road was challenging enough but more cyclone damage has some major roadworks going on up there to stablise the road – some serious engineering, daring earthworks on the edge of the cliff and a flow of cement trucks. The views out on the drive up the mountain are spectacular but we’re here with a large smokey bushfire burning just across the valley and the views are through a haze. 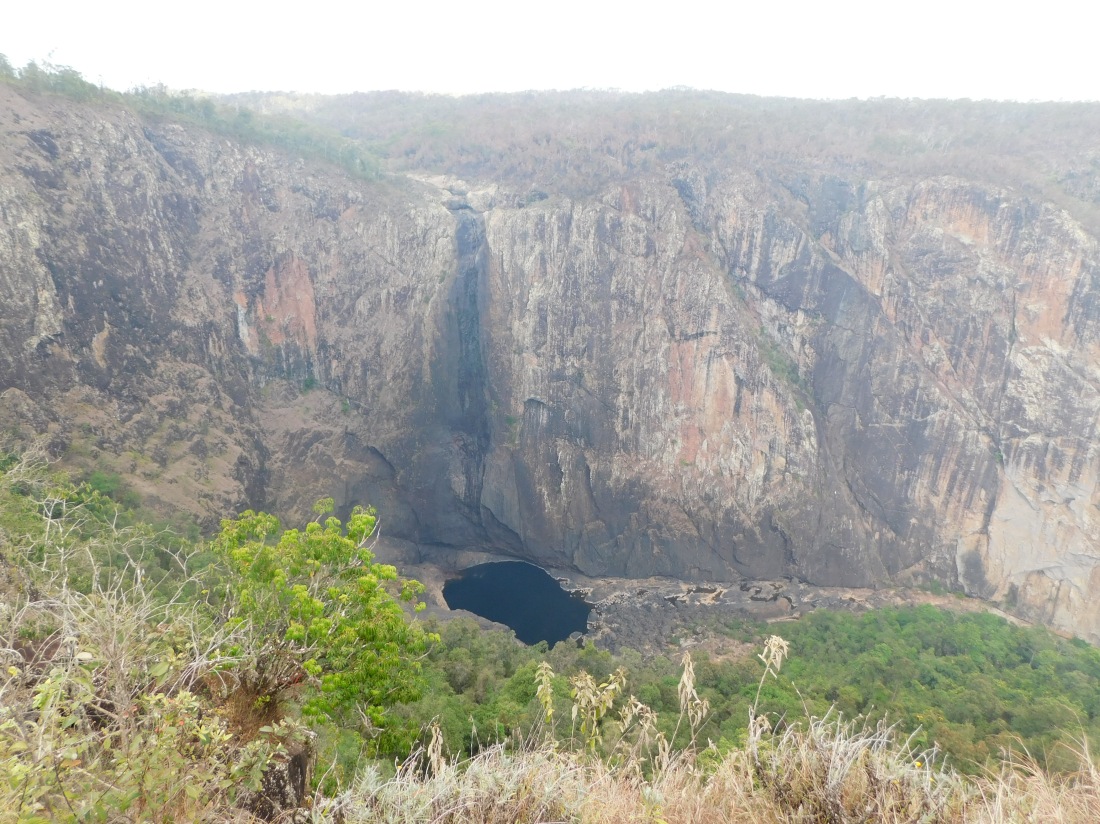 Wallaman Falls was also viewed through the haze and with little water coming down the creek, the falls were pretty ordinary with what was coming over turning to a mist that you could only just see raining down in the pool at the bottom. The camping and picnic areas were really ordinary too and we were glad we hadn’t planned to stay up here. Instead we did the two short walks and on a clearer day with more water it would be a spectacular gorge and waterfall to appreciate.

We wound our way back down the mountain and back through the herds of cattle that were grazing along the roadside (and standing in the middle of the road) and set a course for the beautiful Crystal Creek swimming holes. The first stop was Paradise Pool which is a large clear swimming hole which we managed to arrive at in a lull of visitors and swimmers. We had a float around to cool off and enjoyed the beautiful surroundings before the lull subsided and the place quickly filled with people for a hot Friday afternoon of beers and swimming. 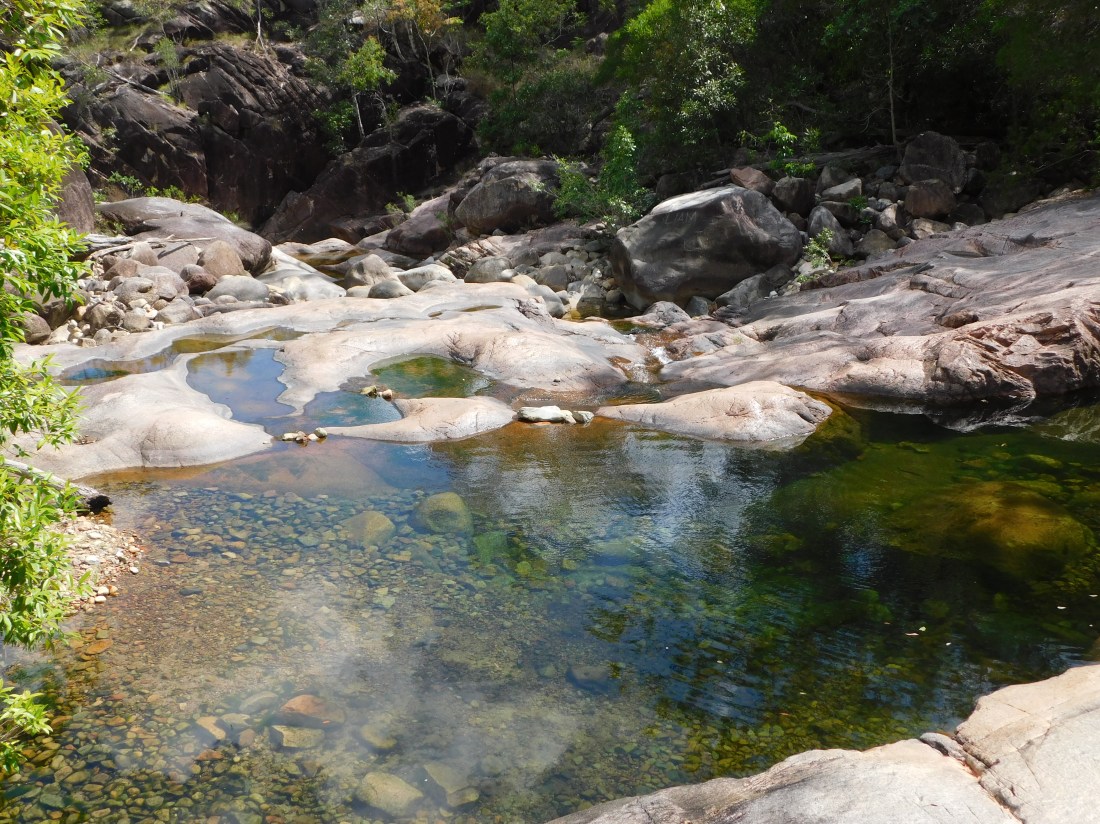 We looked at the camping options here but it was the weekend and it was going to be hectic in the small campground. There are orchards adjoining the national park and an honesty stall had lots of different fruits – we went for their lychees which were delicious.

We opted to drive back to another section of the national park near Jourama Falls and found an empty campground which is another great spot. Open and grassy with shady trees and resident Noisy Pittas – we decided this was a great place to spend a night or two. The walk into the creek and the falls is easy to start with but then there’s a choice to either stop for a swim down near the creek or head up the steep track to the two lookouts near the waterfall. We decided to get to the lookouts first and then get down to the creek for a swim to cool off. 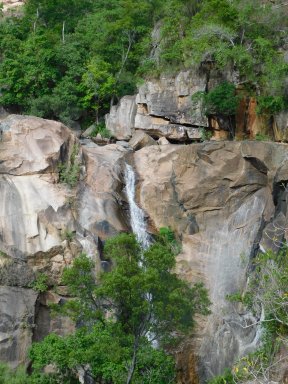 Definitely worthwhile and would be great in the wet when a good flow is surging over – but it still has a good enough flow to make it worth the walk. Down in the creek you can just wander along and find your own swimming hole. We had a nice one which the boys loved because the rocks were so slippery they could slide down into the water. The bonus at the campsite was a cold shower which was perfect to rinse off.

Further upstream of the Paradise Pool is the Rockslides which are amazing fun – we got there early and after a short walk reached the pools and natural waterslides which are surprisingly slippery. An adult would walk away a bit bruised and battered but the boys just kept going undeterred by the growing rips and tears in their shorts! 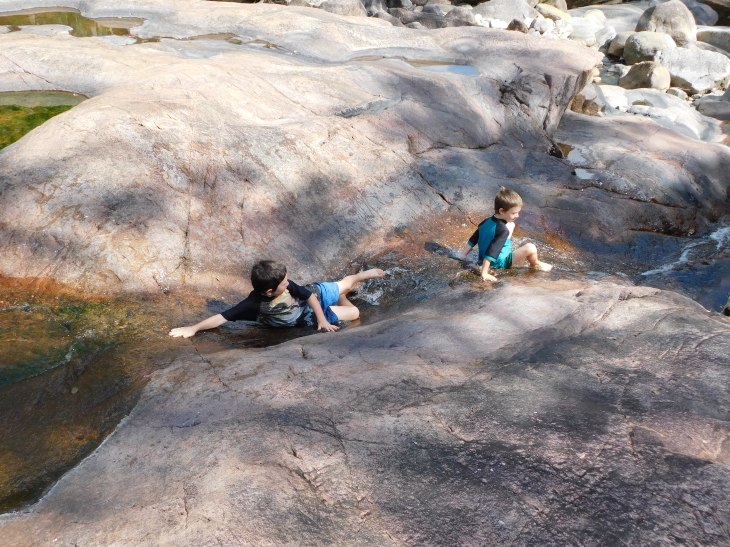 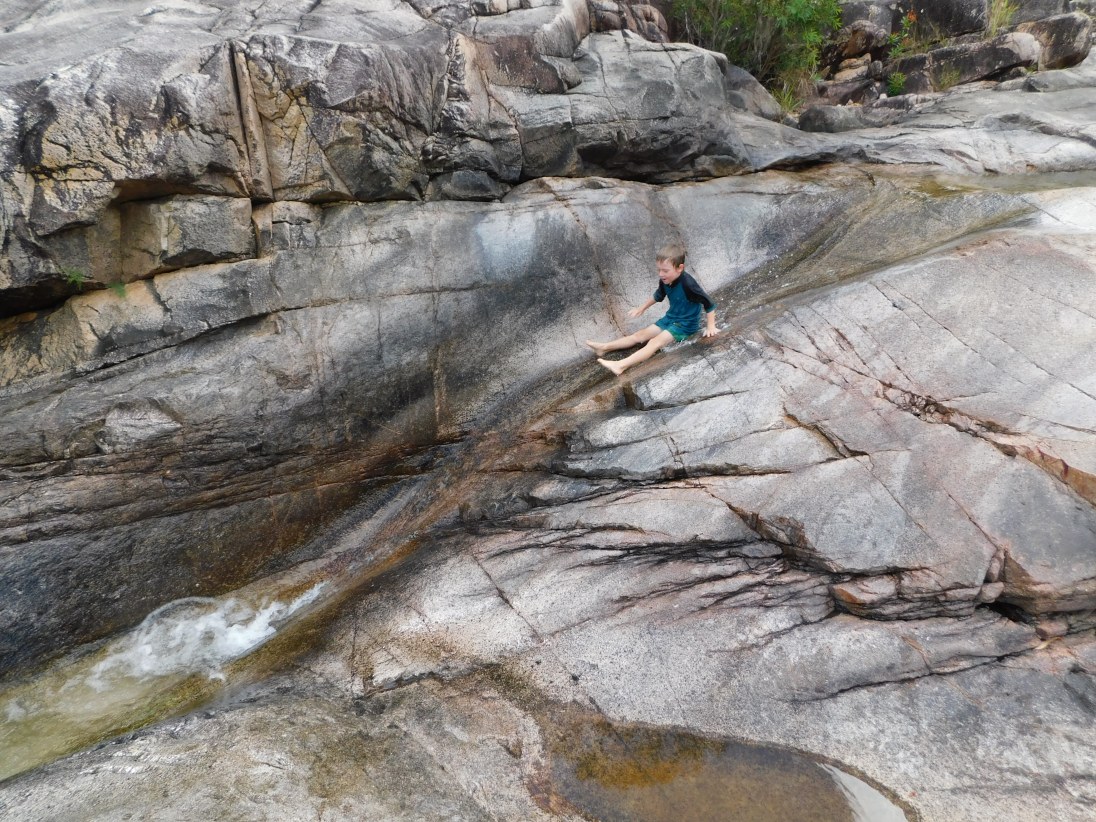