We decided to skip the platypus spotting up at Eungella as we’d had the most amazing experience spotting them in the Teemburra River. The fires seem to be gathering momentum plus the heat is on so they’re other good reasons to not head further up into the hills! We headed down towards Mackay through mostly sugarcane but also growing satellite urban subdivisions which spring up alongside brand new shopping centres. We booked a site at Cape Hillsborough on Smalleys Beach and were surprised how good the site was.

The drive out to Hillsborough is spectacular with the peaks and outcrops providing amazing scenery.

There was a huge tide and the wind was making a churning frothy ocean but our site was set back and protected. The breeze that did get through the dune vegetation was very welcome because it is really, really hot. Luckily the campground has a tap connected to town water so we could walk down and get a bucket of water to cool off – our first bucket was quickly noticed by the resident kookaburras and one dived head first into it with two others coming down and perching on the edge to drink and splash. Realising the local wildlife was feeling the heat as well, we got another container and filled up some water for them – wow, what a way to see the local birdlife! 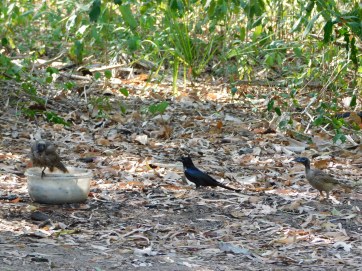 They were lining up – mostly politely except for the angry wattlebirds and friarbirds who thought they could jump the queue by squawking and pecking and fighting the others.

Our favourites were the bush stone curlews who snuck in after we’d gone into the tent (they thought they were sneaky except we’d moved the water container near the tent so we could watch from inside!). They not only had a drink but one even got in and immersed itself in the water. The curlews sought of adopted us as their favourite campers and just hung around our campsite which we didn’t complain about.

We headed into Mackay for a day trip – mainly to make use of their huge multi-level free swimming lagoon (it’s even got a waterfall joining the two levels!). The water was pretty shallow mostly and the cool water temperature we were hoping for was not to be – it was almost warm! But it was better than nothing. Mackay is definitely in the grip of a significant heatwave and we seem to have landed in this region at a difficult, uncomfortable and sweaty time! We got a text message from national parks putting a fire ban in place (of course for the two nights after that text we had people having fires) – even when it became apparent there were major bushfire emergencies emerging to the west at Eungella (where we’d just decided to avoid!) and to the south at Deepwater (where we were planning to be in a few days time!). Likely most people didn’t get the text message because they hadn’t booked. 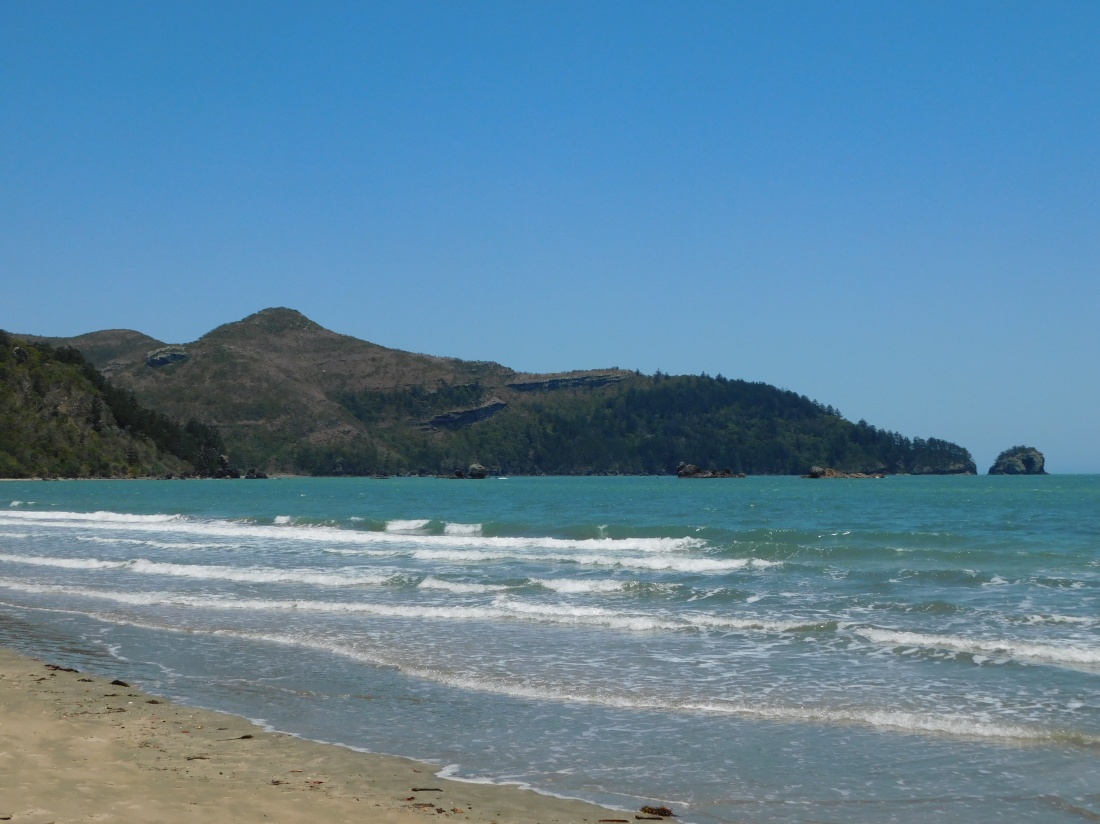 The tides get up to almost 6 metres then recede to expose a hundred metre wide mud flats. Amy and the boys found a green turtle in a small creek that was completely beached and exposed to the incredible heat with little chance of dragging itself back to the ocean. There was a good chance it would get cooked in the burning hot sun before the tide came back in hours later so there was an emergency relocation undertaken.

We managed a nice beach walk one evening with a sea breeze keeping us cool but we were pretty limited as to bushwalking or other activity. We stayed three nights but it’s a busy, popular place and our site was booked out so we hit the road hoping to escape the heat. 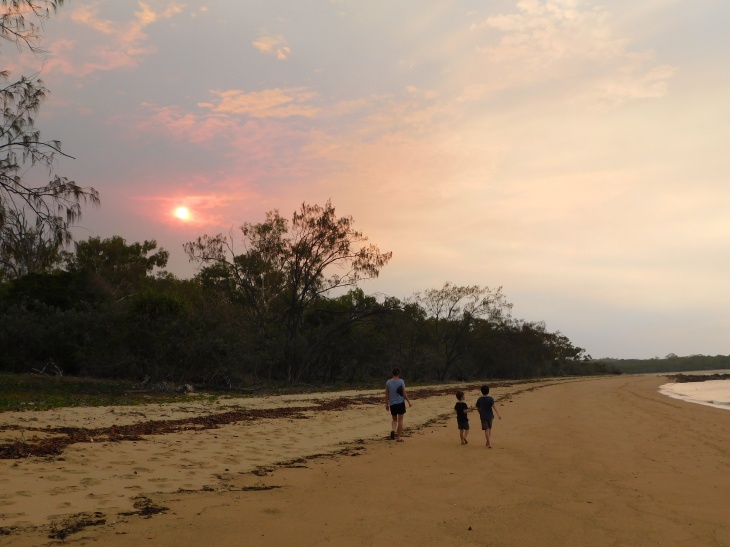 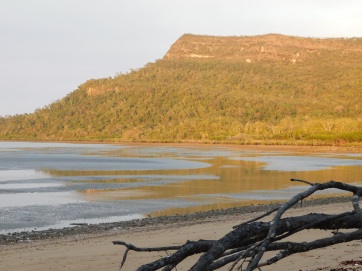