We did a fairly short drive down the highway, through Sarina and out to Cape Palmerston. There’s a few camping options and the choice of an inland track that’s rough-as-guts and slow going or, if the tide is nice and low, a quick drive along the beach that takes only 15minutes to get to Windmill Bay campground. We were lucky that the tides were way out to expose a beautiful wide beach and we dropped a bit of tyre pressure and drove onto the beach spotting a dead sea snake along the way which deserved a “stop and poke”.

Palmerston is so different to Hillsborough with crystal clear water, beautiful beach sand and calmer winds. We got to Windmill Bay and had an empty campground to wander around to find the best spot – in fact we got greedy and parked the car right near the beach so we could sit under the shade of the side awning with uninterrupted views – and put the tent 30 metres back where it was shadier and more protected if the wind got up. 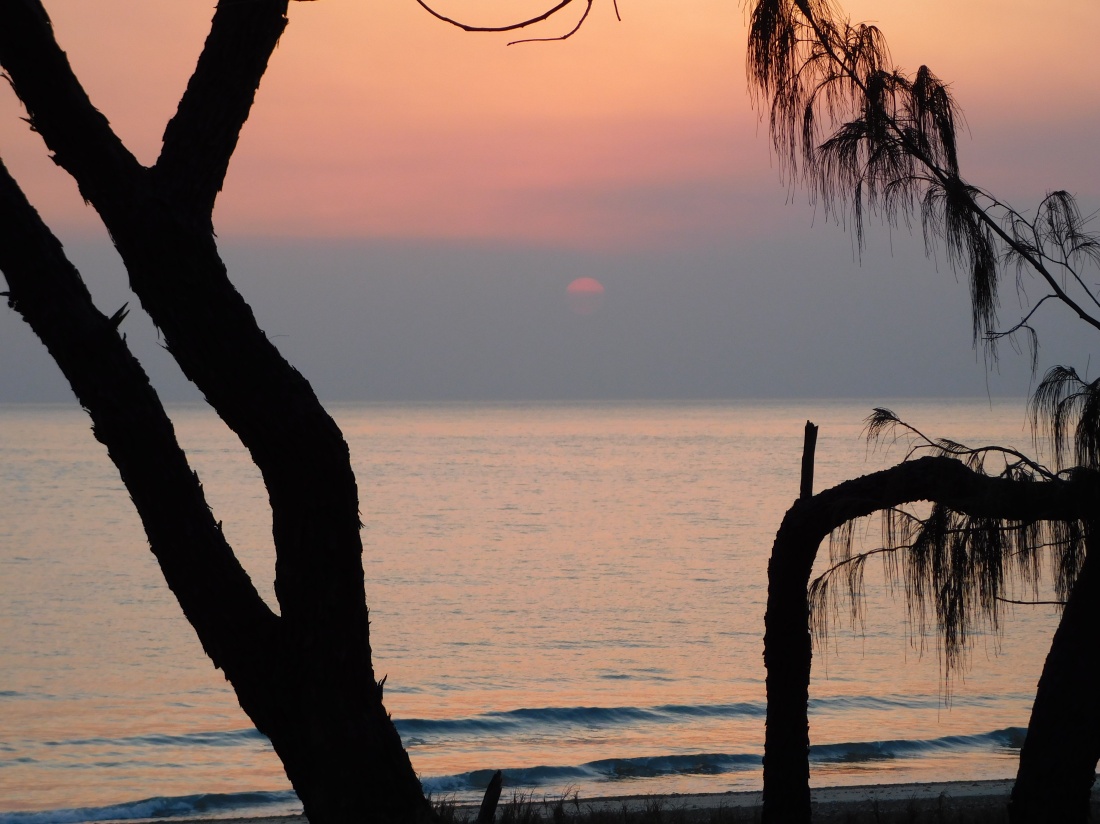 It was a great spot for exploring the beach, we had a go at fishing and the boys found the usual flotsam and jetsam to play with (in this case thick rope, golf balls and even a hard hat (?)). Yet again, the heat was extreme and the constant smoke haze was a bit disconcerting but a few fresh oysters chipped off the headland and the first peace and quiet away from the two wheel drive tourist trail alleviated all.

After a beautiful peaceful night we were all set for another great day in paradise. We were sitting around getting lures tied on for some fishing action as the tide started coming back in when a ranger ute pulled up near us. We had no mobile reception where we were and had not been following what we were now being told was a big bushfire emergency – we knew the heatwave was breaking some records but the fires were turning out to be very bad.

The ranger was such a nice bloke – very apologetic for being the bearer of bad news – the news being we had to pack and leave immediately – but also apologetic that there was no immediate danger – as in no nearby fire – that needed us to evacuate – basically all national parks from here to the sunshine coast were being closed as a precaution due to extreme fire weather. Luckily some local knowledge from the ranger pointed us in the direction of another nearby campsite which was a council reserve very similar to the spot we are now but much safer with better escape routes in the event of fire. So we packed and hit the road – luckily the timing was ok to drive along the beach again and half an hour later we were at Notch Point. 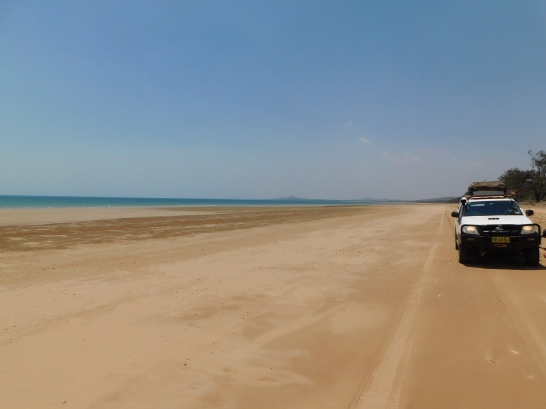 Only one camper was set up so we had plenty of room to find a shady spot. The beach is beautiful and it made us feel a bit better after having left the very nice Windmill Bay. The neighbouring cattle farm has their cows wandering through acting as the lawnmowers. The farmer came through on her quad bike and had a chat – very concerned about the fire situation and concerned for us hoping to travel south with road closures along sections of the highway – if we had to stay a while she said to come and see her for anything we need like water refills but we are pretty stocked up so we’ll be fine for a few days if we need to stay. 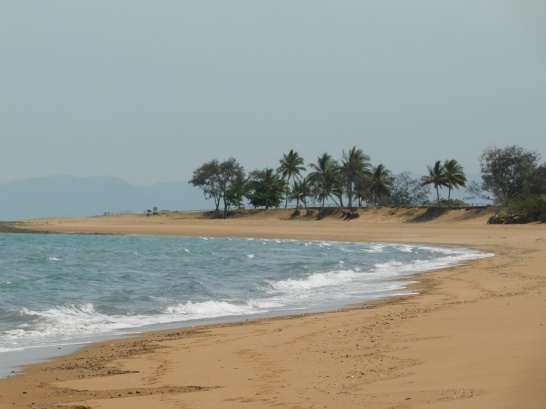 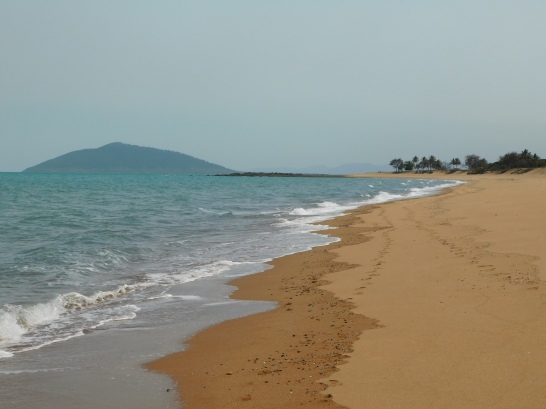 A walk along the beach identified some good gutters in the surf where we decided to target our lures. Straightaway Cam and Amy had a big fish follow the lure into the beach. It took a while but finally Josh got a strike and pulled in an absolute dinosaur – a cross between an eel and a croc with the nastiest teeth you’ll ever see! Long Toms are considered by some to be delicious but you need to know how to fillet it and get the 2 million little bones out. The effort that would be required saved this guys life and he got to swim away – a very good fight though which was fun. 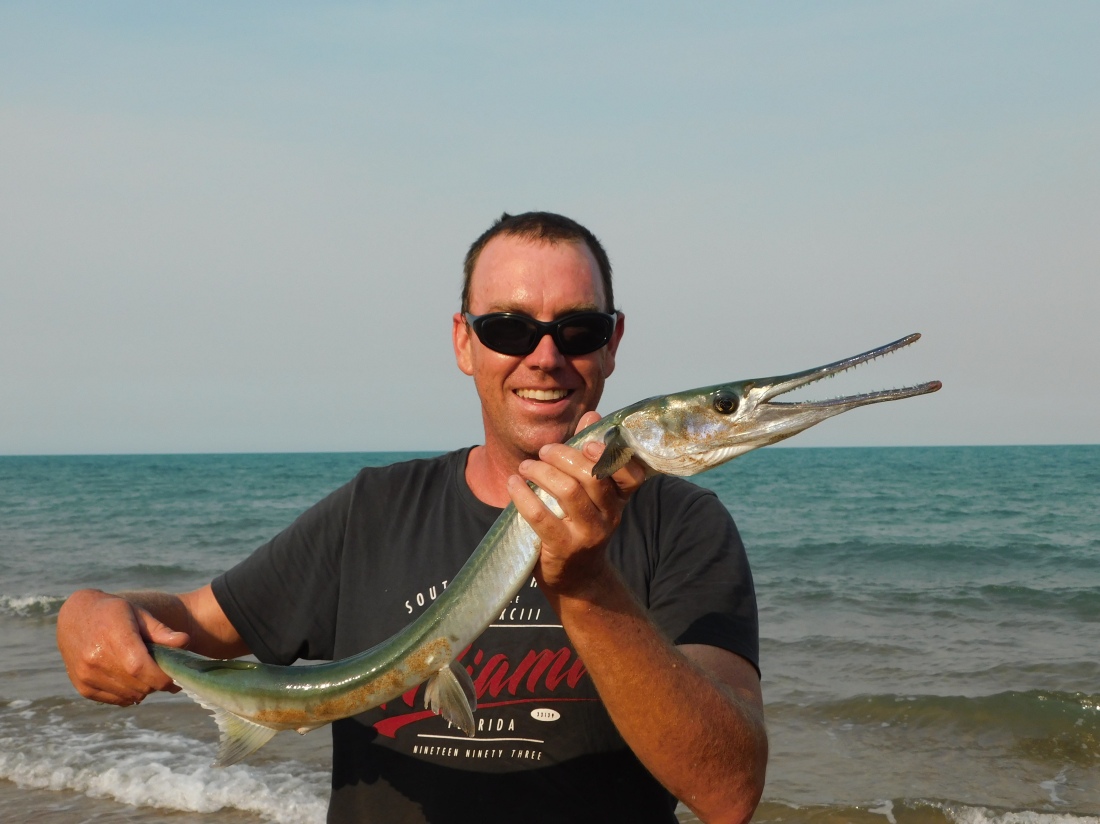